“Barley works even better than rice because you can’t overcook it,” says Gourmandissimo Chef Gilles Roche. 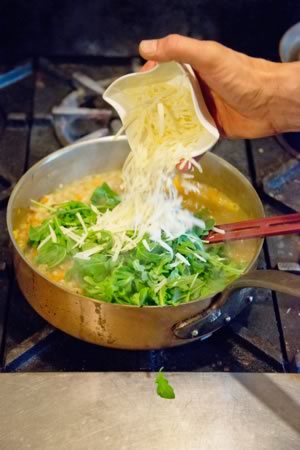 Stir in cheese and chives. Season to taste. Photo by Pete Paterson.

Many home cooks are daunted by the idea of preparing a risotto, imagining it requires hours of standing over a hot stove stirring constantly. But Gilles Roche of Gourmandissimo Catering & Fine Food Shop in Caledon East has developed a method, using barley instead of rice, that greatly simplifies the process and minimizes the need to stir until your arm aches.

His barley risotto, which combines the earthiness of wild mushrooms with the nutty appeal of barley, all set against a backdrop of seasonal root vegetables, is hearty comfort food perfect for fall appetites. The dish is a popular item on his catering menu, especially as it can be easily adapted to suit vegetarians and vegans. “Risotto,” says Gilles, “is very simple and versatile.”

And simplicity and versatility matter to caterers like Gilles and his wife Adriana, who have been serving great food in the Headwaters region since 1999 when they left the big city looking for a quieter place to live and raise their family.

The couple met at Mövenpick Marché in Toronto where Adriana was a pastry chef and Gilles worked after he came to Canada from his native France. A classically trained French chef, he did his apprenticeship at the Hôtel de Paris in Monte Carlo, catering such events as Princess Grace’s funeral and the second wedding of Princess Caroline. “Unfortunately I was in the kitchen the entire time,” Gilles says wistfully.

Meanwhile Adriana was training as a pastry chef at George Brown College in Toronto. In 1991 they opened Gilles Bistro at Bay and Scollard streets, which served a discerning Yorkville clientele for eight years. Today, with three children (Pierre, 16, Christian, 14, and Sophia, 12) to care for, Adriana makes the wedding cakes and desserts for an array of Caledon-area social events while Gilles mans the stoves.

Their busy Airport Road shop in the heart of the village features a large selection of prepared meals and desserts ready to go for those times you’re just too busy to cook. But when you have the time and the spirit moves, Gilles’ barley risotto makes an elegant and easy one-dish meal for family and friends.

“Barley works even better than rice,” Gilles says, “because you can’t overcook it. It doesn’t get mushy like Arborio rice. It stays al dente, a little chewy.”

Barley also takes longer to cook than rice, so Gilles’ secret is to pre-cook the grain in the stock for about 45 minutes. He injects intense fall flavours by starting with a mirepoix of shallots and celery, and such root vegetables as sweet potatoes and carrots. (Parsnips and turnips would also work well.) From there he follows the traditional method of preparing a risotto, adding the mushrooms, rice and the reserved stock a ladle at a time.

“You will probably need to add less stock than with regular risotto,” he says, “so the final cooking time will be shorter.” Which means less stirring of course. The finished dish should be “creamy and a little bit soupy.” 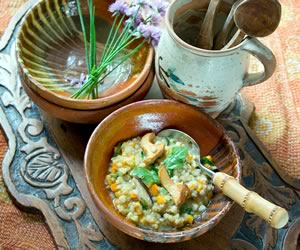 Many home cooks are daunted by the idea of preparing a risotto, imagining it requires hours of standing over a hot stove stirring constantly.