Where the Wild Things Are

The stream gurgles over the rock and stone of the Niagara Escarpment, through a natural wonderland of moss, ferns and wildflowers. Within its glassy pools swim brook trout. They dimple the surface as they feed on insects raining down from overhanging branches.

Brook trout are lovely – especially males at this time of year – with topsides spangled gold, and fins and bellies as fiery as the setting sun. I visit the stream frequently in the autumn to watch them in their wild, liquid haunts. 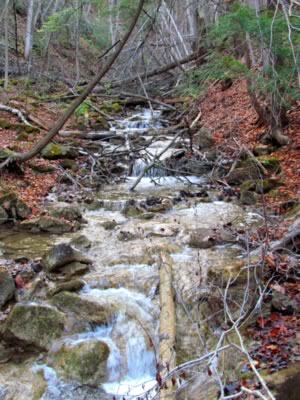 Like the brook trout, these minnows are beautiful, with flanks tinted cardinal red. Redside dace thrive in trout streams because the clarity of the water allows them to see the low flying insects that they eat. These they catch by leaping acrobatically out of the water.

The wild things of brook trout habitat live not only the streams but the surrounding forest. The trout stream I visit cascades through a fine woodland of old pine, hemlock and red oak that harbours abundant bird life. In spring the Louisiana waterthrush, a rare species of warbler here in Ontario, whistles exuberantly over the sound of the burbling water.

One starry night I found a saw-whet owl uttering its modest “toot, toot, toot” call from a hemlock bough overarching the stream. These elfin owls are remarkably trusting. I peered into its untroubled eyes and then quietly backed away.

Spotted salamanders and their rare relatives, the Jefferson salamanders, also live in this trout stream wonderland. They emerge from their subterranean hideaways in spring and wriggle downstream to reach their breeding pools.

To go where the wild things are, visit a trout stream.