A Blast from the Past

It’s so long ago, it’s probably safe to tell the story now.

Canada is a land of committees. Years ago, there was a joke making the rounds that every country had its own distinct form of social organization. If three or more Italians got together, they instantly became a political party, in France they would start a union, and the British would form a queue. Here in Canada we would organize a panel discussion.

I have served on enough committees to know that we do have a habit of jawing a thing to death before we pick up a shovel, but our history tells us we also respect a firm voice and a clear call to action.

For example, there was an old fieldstone church that once stood on the Little farm on the 7th Line of Mulmur Township, just north of Highway 89. The cemetery attached to Old St. Luke’s is still maintained today, although the church itself has been gone for nearly 90 years. The cluster of gravestones in the shade of ancient maple trees carries the names of Littles, McNabbs, Gallaughers and many other families from the first days of the township.

I gave a little talk to a neighborhood audience a few years ago and mentioned how as a boy, I often rode horseback past the remains of the old church, which had burned to the ground in 1926. During the reception afterwards, Lucille Burley, an elderly woman who had been born on the Little farm, came over to correct me. This often happens when I make any observation about the past in Rosemont.

“Did I get the date wrong about the fire?” I asked.

“The date was probably right. But it didn’t burn down.”

“What happened to it then?”

“Really?” I said. “Nobody ever told me anything about blowing it up.”

“I don’t think many people know what really happened. I only know from a few things my father told me. But it’s so long ago, it’s probably safe to tell the story now.”

The old church stood on a lot the family had donated in 1860, but by the 1920s it had fallen into disrepair and the elders were reluctant to pour more money into it. The congregation wrangled over the problem for ten years while the roof leaked and wind whistled through the cracks in the stone walls. Eventually a portion of the congregation broke away and began construction of a new brick church a mile away in the village of Rosemont, proposing to christen it St. Luke’s as well.

Faced with the prospect of a permanent rift in the church family, one of the parishioners went over to the old church in broad daylight and placed a charge of dynamite in the basement. The explosion levelled the building and left the Anglicans with no choice but to gather in New St. Luke’s. This is the same church my wife and I were married in. 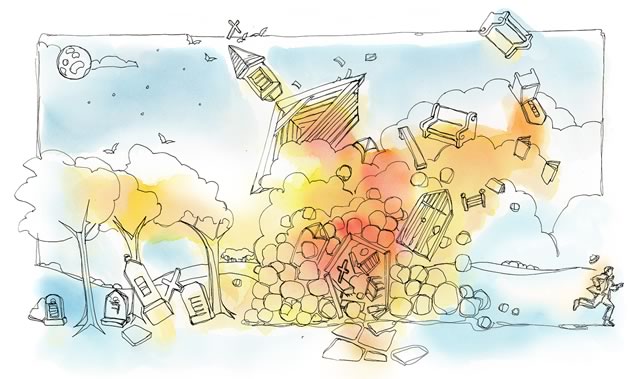 “Really?” I said. “Nobody ever told me anything about blowing it up.” Illustration by Shelagh Armstrong.

“Do they have any idea who the guy was that placed the dynamite?” I asked.

“But one of the stained glass windows above the altar is dedicated to a John McNabb. Would that be the same man?”

She nodded. “People were ever so grateful to John. Without him, the split in the church might have lasted for decades. It was a very painful subject for a lot of people for many years and families were careful not to speak about it. My father certainly never got over it. But it’s all forgotten now.”

The three stained glass windows show a scene of Jesus with a flock of sheep. The inscription below reads, “Feed My Sheep.” As a shepherd myself, I know that sheep are not easily led anywhere and they have a genius for self-destruction. This helps to explain why they turn up so often in Scripture. They are also a completely man-made animal, the work in progress of a committee that has been meeting steadily for about six thousand years now.

Canadians are certainly not sheep. We are talkers because we prefer to move forward as a group. But we are also a fractious and disputatious tribe who sometimes need a rugged individualist to bring closure to a discussion and cast a “weighted” vote. In the end, we understand the group is more important than any building. And, to draw from another corner of the barnyard, you can’t make an omelette without breaking a few eggs.