Fire in the Kitchen

Here’s the Rub! Firefighter Christian Horner is spicing up menus in the hills and beyond. 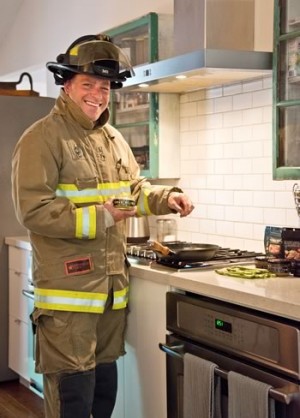 Firefighter Christian Horner is spicing up menus in the hills and beyond. Photo by Pete Paterson.

Christian Horner is a firefighter. He works out of Station 315 at College and Spadina in Toronto, but he lives in these hills and is perhaps better known around here for the spice rubs and pickles he sells at the Orangeville Farmers’ Market – as well as for his black pickup truck with the company logo emblazoned on the side: Fire in the Kitchen Spice Company.

Christian’s interest in food started very early. At an age when many boys dream of becoming firefighters, Christian was thinking about food. “My mother had a fine food catering business in downtown Toronto for 30 years – Catering by Kristina Bliss,” he says. He is telling his story in the Black Wolf Smokehouse on Broadway in Orangeville. Christian, 41, is vigorous and very energetic. He talks in a hurry, as if he has tables waiting for orders.

“I started chopping parsley for Mom when I was seven” he says. “I was making burger patties for Blueberry Hill Burgers at 12.” Over the next 20 years, he worked as a line cook in many restaurants, shucked oysters and tended bar at establishments in Canada and the U.S. He also started his own outdoor barbecue catering company called Sierra North Burger Company – and began to experiment with various spice combinations to flavour his burgers.

In his early 30s, Christian decided he needed a job with more stability. So he took the firefighting course at Humber College and was quickly hired by Toronto Fire Services. Though this put the business of food on the back burner for a while, his passion continued to simmer. After all, it’s difficult to keep that kind of enthusiasm down, and in the fire hall, it was sparked again.

Jim Warren is senior captain at the College Street fire station. When new recruits arrive, Jim says, one of the first things the veterans want to know is whether they can cook. Firefighters work 24-hour shifts, so “whenever you can get a good cook, it’s a bonus. Anyone who wants to cook gets carte blanche.”

Jim has been a firefighter for more than 32 years and has seen many changes in that time, from the firefighting equipment to the protective gear to the food they eat. “Back in the day,” he says, “we had three words to describe our food: hot, brown and lots. Every station had a 50-pound bag of potatoes in the kitchen, and we’d probably eat 10 pounds a meal.

“But we took out the deep fryers, mostly for safety reasons, and have started eating much healthier. Christian represents that change because he always serves a big salad that’s full of stuff. Sometimes,” he laughs, “we have to ask him what’s in there.”

In the fire hall kitchen, Christian, of course, is in his element. He serves various sausages from a butcher who uses his flavourings, and he often creates new hamburger combinations.

“Some of the burgers have slices of fruit and alfalfa sprouts, so they’re six inches high,” says Jim. “They hardly fit into your mouth and Christian always has to take a picture before we eat.” Delaying a meal in a fire hall is not usually a good idea. “It seems we always go out halfway through a meal,” he adds. “They’re chewing and swallowing a last mouthful as they slide down the pole.”

Christian also uses his fellow firefighters as guinea pigs. They help determine whether his spice mixtures are too hot or not hot enough. It was the fire hall work that inspired the name of his company – Fire in the Kitchen – and it was a butcher who helped him launch the endeavour.

For 35 years Ali Jiwani has operated the Elmwood Meat Market on Lakeshore Road East in Port Credit. It’s where Christian used to buy the meat for his catering company. One day he gave Ali a sample of a mixture he had made for his backyard barbecue. Ali thought it was tasty enough to sell and it became the One Rub spice mix.

Ali’s sales idea had lurked in the back of Christian’s mind for some time, so he bought bottles, made labels, mixed a batch and was back at Ali’s market not long afterward. “He sold everything in a week,” said Christian. “I just started making up batches and knocking on doors.”

Now his most longstanding customer, Ali says, “I told him he should always use quality ingredients, no byproducts or fillers. It’s an excellent product and we sell a lot.”

Orangeville Farmers’ Market was another early success. “The reaction of people when they tasted inspired me to keep going,” says Christian, “especially when they’d come back for more!”

Fire in the Kitchen now produces a dozen flavours, as well as a Caesar rimmer, pickles and pickled asparagus. The name of each product has a story. Crazy K’s Rib Rub is named for Christian’s mother. T-Bone’s Smoke Eater is named for his brother-in-law Tony, whose nickname is T-Bone. And Piper is the nickname of a friend who combined three spice blends into a spicy Caesar rimmer. Momma Grace’s Inspired Jerk Rub is named for a great cook at a restaurant where Christian shucked oysters, and Graça’s Piri Piri Spice was inspired by Christian’s Portuguese wife, Grace (Graça in Portugal). Then there’s JJ’s Veggie Blaze, which carries his sister’s nickname. “She loves her vegetables,” says Christian.

Today more than 250 retailers across Canada carry Fire in the Kitchen rubs and pickles. For the most part, these retailers are gourmet food shops, butchers and independent grocers, but Christian has recently had success with some supermarket chains, so his products can now be found on the shelves of 60 Loblaw stores, including Zehrs in Orangeville and Bolton. 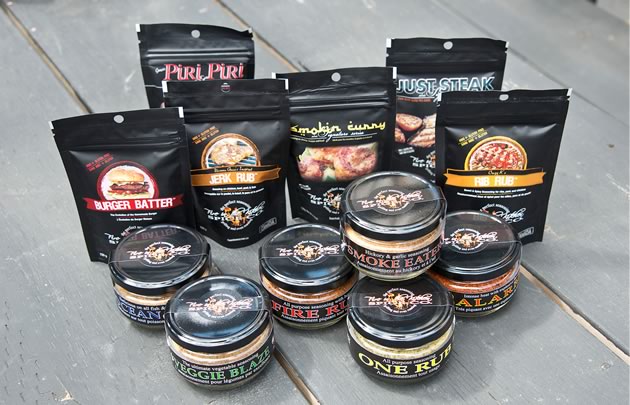 Fire in the Kitchen now produces a dozen flavours, as well as a Caesar rimmer, pickles and pickled asparagus. Photo by Pete Paterson.

His partner may well help bring in more. Three years ago Mark Venton was taking early retirement from his job as sales and marketing director at Procter & Gamble Canada. He met Christian through his brother Scott, who was Christian’s lawyer. Mark was impressed by the product and described the packaging as “awesome.” A few weeks later Christian asked if he would like to be part of the company. Mark replied, “I was hoping you would say that.”

“We’re set on the products for now,” says Mark. “So we’re focusing on increasing our outlets.” A recent trip to Vancouver and Kelowna brought in five more stores. “We support our new outlets with demos from a Red Seal chef,” he continues. “We met her at the Eat! Vancouver food show.”

The partners have planned another trip to the East Coast, where they hope to reconnect with Michael Smith. They met the celebrity chef at an event at Deerhurst Resort, where Christian volunteered to help shuck oysters while Michael was being interviewed. Christian gave him some rubs to try, and Michael complimented them on his Facebook page.

On his days off from the fire hall, it appears Christian will be doing a lot of travelling. Says Mark, “There’s a lot of white space in Canada we have to fill.”

Visit Fire in the Kitchen online for recipes, their rubs and pickles are available at the following retailers in the Headwaters region: