“I feel when you do dishes people know, you really have to do them well.”

Watching chef Jeffrey VandenHoek dart around the kitchen at Mono Cliffs Inn, reaching for pans, spinning on his heels and gliding from stove to countertop seemingly without looking, it’s clear that after three years here it is more like a home than a workplace.

Born and raised in Caledon, the tall, youthful 29-year-old has come to roost at this beloved Mono Centre gathering spot because he and innkeeper Carol Hall see eye to eye on the best kind of food to send out to guests.

“It’s uncomplicated, family-style home cooking,” Jeffrey says. “This place exemplifies that. This is the kind of food that’s been bringing people here for years.”

That said, familiar food still has to wow. With wintery classics such as the braised lamb shanks he’s sharing with us here, there’s plenty of room to deepen and elevate flavours. “I feel when you do dishes people know, you really have to do them well.”

For instance, Jeffrey relies on refined ingredients such as velvety veal stock that just doesn’t compare to its off-the-shelf peers.

“We simmer that stock for two days, which you wouldn’t do at home,” he says, pointing to two giant burbling stock pots. He also adds beer – Wellington County Dark Ale if you want to follow along – which brings a deep caramel undercurrent to the sauce.

“It also adds a little acidity, which is important to a rich dish like this,” he says. “And it helps tenderize the meat.”

Aside from tweaked classics, you will not find any molecular foams or preciously trendy menu items here. “I’m not a fan of fuss and flair.”

After starting his career as a co-op high school student at Devil’s Pulpit golf course in Caledon, Jeffrey travelled to the Yukon when he was 20 to cook in a hotel before coming back and working in various restaurants in the region.

The fact that Jeffrey has only one hand and his left arm ends at his elbow seems to have no impact on his work. He’s dealt with this reality since birth and has never felt compromised or prevented from creating the kind of food he craves.

“Food for me is about family, about sitting down and sharing,” he says, reminiscing about growing up with his four siblings and looking forward to serious table time. The family is now sprinkled around Orangeville, Mono and Acton, as well as the Yukon – a brother who came to visit him there stayed behind and put down roots.

Speaking of family, Jeffrey has just a few months before he has to develop a whole new slate of dishes for a key customer: newborn daughter Olive. Jeffrey’s wife Kelsey, who was also a cook at Mono Cliffs until recently, gave birth to their first child in October and he’s already pondering purées made from, for example, roasted sweet potatoes instead of boiled.

“I’m thinking about how to get flavour out of ingredients without all the salt and sugar of store-bought foods,” he says.

And when she’s ready, may we suggest a little braised lamb shank as the perfect pairing? 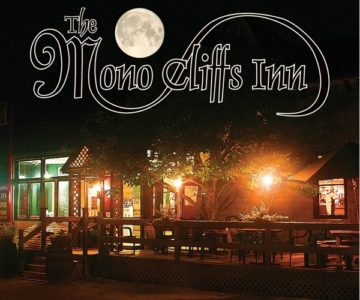 Situated in one of the most scenic stretches of the Bruce Trail, next to the Mono Cliffs Provincial Park the Inn has become a mecca for lovers of food and Australian Wines. 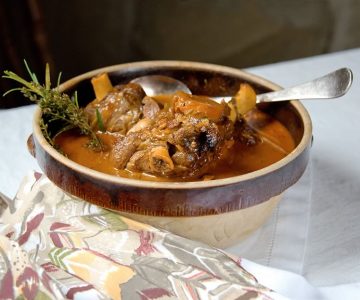 With wintery classics such as the braised lamb shanks, there’s plenty of room to deepen and elevate flavours.