We were no longer home and the space sometimes felt like just that – a space.

As I came around the corner, I felt a sharp stab in my stomach. It spread like fire, and I closed my eyes and folded over, inhaling the cold night air in several large gulps. When my breathing slowed, I stood back up to see what had caused the pain and tears. And there it was, with twinkling lights and a soft glow in the fall night – my house.

It was my house, but with a “sold” sign on it. I was shocked when I came around the corner and saw it, even though I had been going through the motions and paperwork of offers and clauses for months. I realized that soon I could not go on my nightly jaunts and end up back home on Forest Park Road.

We’ve had eight years of living in our flat-roofed house in Orangeville, previously inhabited by Jack and Elizabeth Eastaugh. Jack was a fantastic artist of the Group of Seven era who, with his contemporaries, observed the smooth lines and forces of nature, and translated them to paper with ink and pigment. He was also a carver, and his totem poles were revered and documented in art books, quite unusual for a non-Aboriginal.

When I looked through the books and diaries left in the basement, I came upon Jack’s yearbook and found that he had been in the same school as my Poppa. “If only we could have all been like Jack!” my grandfather cried when I told him about the house we had bought and showed him the yearbook. My kinship with Jack was sealed, even though we had never met.

Elizabeth, who sold the house to us after Jack died, was kind enough to leave a personal welcome note, garden maps, art books and several of Jack’s paintings. It was as if there were a kind spirit watching over the house, making magic year after year.

During a particularly frustrating moment in the (first) basement renovation, I pulled out what I thought was yet another piece of junk from the back of a closet. Aged watercolour paper fell to the floor – another gift from the late Jack Eastaugh, hidden away as a Christmas present perhaps, or put aside for framing later on. It was a painting in Jack’s unmistakable style, depicting an Ontario forest – just the sort of place I desperately needed for some outdoor therapy at that moment. I silently promised him I would get back to the forest for long treks.

When I thought I could not take the flat roofs one more winter, the old rattling windows through one more storm, spring would arrive. I would be thrashing about in the yard, wondering if I could manage the garden yet another year, and then the carefully planned waves of bloom would begin. Jack and Elizabeth were at it again, and I would thank them for the encouragement to stay. My son Adrian spent his younger summers moving garden things here and there – apples, sticks, dead leaves for compost. One of the sheds was cleared out for use as his “clubhouse.” It was perfection for that time in our lives.

But then life got busier. And different. It hurt to think I couldn’t keep up to the house. I felt tremendous guilt as the garden breathed to life the last few springs and all I could do was watch from my window as it unfurled toward me. Repairs were left undone as money ran tight. Arguments over upkeep, finances, and attention to detail led me to slam the windows tight in shame and anger. 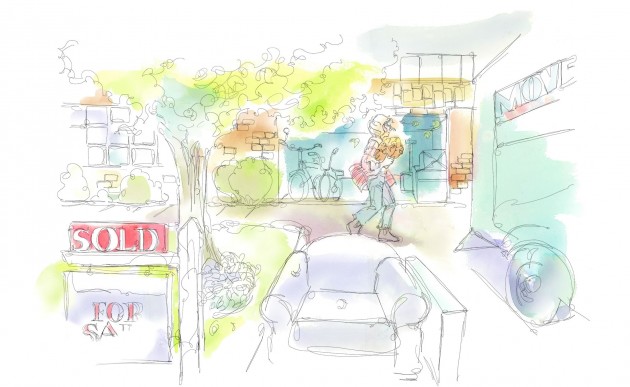 Eventually, the decision was made to sell. Illustration by Shelagh Armstrong.

Off I went to work. For Adrian, it was baseball in the summer and skiing in the winter. We were no longer home and the space sometimes felt like just that – a space. What happened? I asked Jack and Elizabeth as I adjusted the framed forest hanging in the basement.

What happened was that we had changed. Just as Jack and Elizabeth lived gardening and painting and reading together, their needs changed eventually. I needed a smaller space with less housework. When Adrian was toddling around and in school part time, I consulted and set my own hours. When I had a studio on Mill Street, I found an hour or two to come home and touch the garden with a light hand a few times a week. Now I was office-bound by day and out the door to activities on evenings and weekends.

Eventually, the decision was made to sell. It has taken awhile for the right family to find Forest Park Road – a family with little ones in tow, ready to explore and make the backyard their fantasy land for the next few years. They love the house and garden already and have solid plans to revitalize them. I am so thankful for that.

After my walk that fall evening, as I cleaned out the garage with a melancholy heart, Jack came through for me. Two unfinished carvings presented themselves. I had seen them before and almost given them up as firewood. Unfinished – or perhaps just begun? An eagle, as you would see on a totem pole, wings outstretched to the sky, half carved and half sketched. And then, a small warrior carved in relief on a wooden stump, crouched at the ready and looking ahead.

For what? I thought. Where are you going? Where was Jack taking you? “With me,” I answered. “You’re coming with me.”

Moving and purging resources in Headwaters

So, you’re moving? Or maybe just purging the kids’ rooms after the holiday rush! Why not consider one of the following ways to donate your kids’ (and other) goods? Your donations can go a long way to helping our community.

Family Transition Place helps women and their children who have experienced abuse. When you’re cleaning up to move, consider donating new things you don’t want to take with you, such as non-perishable food, bottles of shampoo, conditioner and body lotions, and toys (no stuffies or toys that suggest violence, please). familytransitionplace.ca

Chez Thrift at 301 Queen Street South, Unit 9, in Bolton is a fun place to donate your gently-used clothing and shoes, linens, belts, ties and purses, books, DVDs and CDs, and antiques or collectables. See the “shop” link at ccs4u.org

Digging around and found something you feel has historical value? Get in touch with PAMA (Peel Art Gallery Museum and Archives) or Dufferin County Museum & Archives. Every donation to our local archives plays a role in preserving the history and culture of life in the hills for our kids’ generation. pama.peelregion.ca and dufferinmuseum.com

Bookends bookstore in Erin is the perfect place to drop off children’s books that are still in good condition. There are hundreds of secondhand books to choose from if you’re in the shopping mood as well. It’s located at 45 Main Street in Erin. See “stores” at eastwellingtoncommunityservices.com

Did you know that Dufferin County publishes a local guide on how to manage your waste and recycling? This is an extensive directory that will help you find a home for everything: old sports equipment, outgrown eyeglasses, used instruments, CDs and gaming systems your kids have finished with. Find it online by searching “Take It Back” at dufferincounty.ca

There is one privately run transfer station in Dufferin County, which is owned and operated by Green for Life. Bulky items such as broken toys, car seats, construction and demolition material, games containing electronic waste and metal items are all good to go! Some fees may apply. GFL Dufferin Transfer Station is located at 473051 Dufferin County Road 11, Amaranth. 519-943-0101