Learning to cook at his Macedonian grandmother’s side as a boy in Mississauga, he says he learned, “You cook with emotion as opposed to cooking just to eat.” 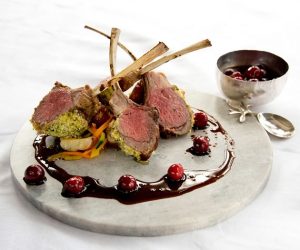 As Anthony Trenton preps a herb crust for his signature fall lamb dish, the youthful, big-eyed chef disappears outside for a moment and comes back with a handful of bright green parsley and mint.

Outside Aria Bistro & Lounge, you see, Chef has a burgeoning herb and vegetable garden. Once back inside, he rolls up dried lavender and grated garlic inside the herb leaves. He then slices the compact bundle into a ribbony chiffonade before chopping it further into tiny flecks, an intense focus never leaving his face.

It’s not hard to believe this plate originates with one of Anthony’s heroes, famed California chef Thomas Keller, who is known for his precision and focus on high-quality ingredients at The French Laundry and beyond.

Anthony says the Keller-inspired sour cherry preserves are ideal carriers for the warming fall flavours that go so well with lamb chops, including cinnamon, star anise and coriander. Thick and tangy, the preserves also act as a glossy paint for the plate, which Anthony applies with a Jackson Pollock-worthy swoop of the wrist.

“Artistry is huge in a place like this,” he says as we onlookers, including young staffers showing up for dinner service, ogle the final plate. This canvas is punctuated with a lean-to of chops, slivers of brightly coloured julienned vegetables and cherries dotting the artful slash of preserves on the plate. “What customers see first is what they’ll taste.”

That first look gives the cook the upper hand, according to Anthony’s strategy. If you follow that up with great ingredients, treated simply, you can’t lose, he says. For fall, that killer ingredient list on the Aria menu features fresh Ontario produce, especially squash, and game meat including bison and venison. (He’s partial to the flavour of Australian lamb for this dish, a notable exception.)

Oh, and those sour cherry preserves? His recipe makes more than enough for leftovers. He recommends trying it with scones, pancakes or French toast.

At just 24, Anthony heads up this kitchen with a confidence beyond his years, but there’s also a big heart behind all that precision. Learning to cook at his Macedonian grandmother’s side as a boy in Mississauga, he says he learned, “You cook with emotion as opposed to cooking just to eat.”

He’s been with Aria for the three years Michael Cherry has owned the tony boîte on Main Street in north Brampton. “I’ve known him since he was 16,” says Michael. The two met at the Culinary Arts School of Ontario, where Michael ran the student restaurant.

And while the pair bring a professional, fine-dining flair to this space, Anthony says home cooks shouldn’t be intimidated by the polished plate above. For one, he’s free with pro tips. For that herb crust, for instance, he recommends blitzing some of the herbs with oil, then adding that to the breadcrumb mixture to bind it together. But he claims we amateurs can nail it, with or without insider knowledge. “Don’t be afraid to try any recipe,” he says. “When you keep at it, you get better every day.” 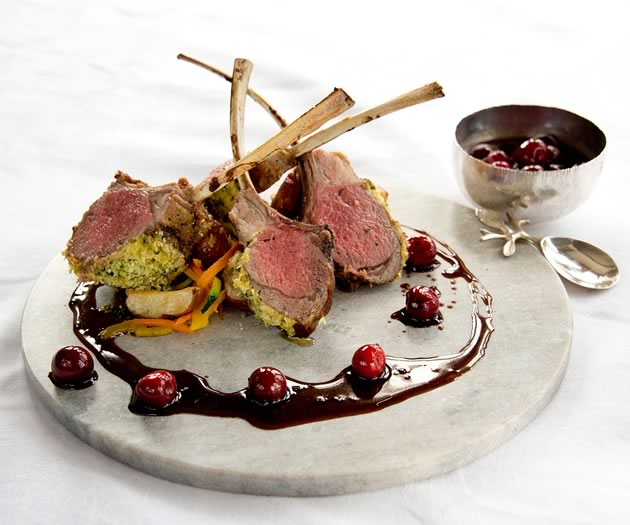