The lovely, handwritten invitation to the Ladies’ Annual Spring Luncheon arrived in my mailbox just as the last of the late winter slush was disappearing from the roads. Always held on the first day of spring, and always with a note reminding guests that hats are mandatory, Mary’s invitation was as welcome as the sound of spring peepers. 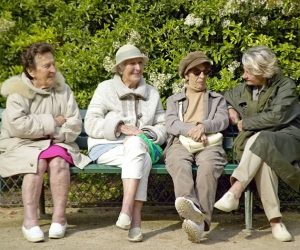 Friends, old and new, are key to companionship.

The lunch is a fun gathering, a chance to emerge from under heavy winter fabrics, don lighter weights and colours, and enjoy the company of women I don’t often see. I find friendships a renewable source of power. They give meaning and purpose to my days.

This time, there was talk of celebrating “the big one,” which in my circle now refers to our 80th. Whoa. Wait a minute. Really? Have 30 years gone by since “the big one” meant our 50th?

Our groping for names and mid-sentence mental blanks was graciously overlooked, and these days more of us are drinking Perrier than wine. The times they are a-changin’. There were fewer of us this year, and more were living alone. I expect this will be the pattern from now on.

Women’s friendships encourage full disclosure and showing vulnerability is the norm. The new widows in the group readily admitted to lonely times and the difficulties of finding their way as singles in a couple’s world.

Writing in The Globe and Mail, Elizabeth Renzetti noted more Canadians than ever now live alone, and nearly one-quarter describe themselves as lonely. Renzetti also cited two U.S. studies showing 40 per cent of people say they’re lonely, a figure that has doubled in 30 years.

She pointed out that the consequences of these societal transformations will undoubtedly provide a focus for social scientists in the years to come. And psychologists believe the toll of loneliness isn’t just emotional. Those who suffer chronic loneliness run a higher risk of illness and premature death. Loneliness has also been linked to depression, anxiety, hostility, an increase in vulnerability to health problems and even suicide.

Along with others, Renzetti noted the great irony of our era. Though current communication technology means people have never been better connected, it also means many of us have never been more disconnected from others.

Long-term care homes recognize the health benefits of meaningful social engagement by incorporating programmed activities into the daily routine of residents, and some even promote intergenerational activities. A few Toronto long-term care homes incorporate early-learning and childcare centres into their facilities, sharing lobby space to encourage spontaneous connections between the children and the seniors.

Did you see that the seventh International Pillow Fight Day was recently celebrated in more than a hundred cities around the world, including Toronto? The Urban Playground Movement, which organizes the event, wants to create a global community of participants to get people off their couches and onto the streets to interact with one another. Wacky, you might say, but definitely creative.

If, as I believe, living is a creative act and if we are to thrive rather than just survive, then the final chapters of our lives demand more use of creative imagination. My friends and acquaintances who continue to be involved in what’s going on around them are the most content.

Those involvements can be as simple as meeting a friend for a birthday breakfast, trying a new restaurant at a bimonthly social lunch with a neighbour or joining, or starting, a book club, walking group, euchre or bridge group, or whatever strikes your fancy.

Dropping into a local seniors’ centre could well spark a new interest, such as starting on your memoirs or family tree, reconnecting with that old guitar, or calling a friend with an idea for a kitchen party. I know of a group that uses the recipes in the LCBO’s Food & Drink magazine as inspiration for quarterly gourmet meals.

At this particular juncture of life, many of us have the time and skills to give back to our neighbourhoods, our communities and the world beyond.

Chris Hadfield’s intriguing book An Astronaut’s Guide to Life on Earth tells us the word “attitude” in space flight refers to orientation, the direction in which your vehicle is pointing in relation to sun, Earth and other spacecraft. He writes, “If you lose control of your attitude, two things happen: the vehicle starts to tumble and spin, disorienting everyone on board, and it also strays from its course, which … could mean the difference between life and death.”

I think this is a particularly appropriate metaphor for how we live the later chapters of our lives. Our attitude is vital to our sense of well-being. That’s why the wellness prescription I write for myself will always include friends.