I discovered at an early age that people who work outside with their hands tend to be more grounded than the rest of the population.

The turmoil south of the border has morphed into a freeway chase that just won’t stop. We stare wide-eyed as the Trump machine takes out lampposts and climbs the sidewalk, wondering how and where this will all end. But at some point, for our sanity, we must find a way to tear ourselves away from the screen and return to our lives.

It is a natural instinct for humans to want to occupy a knowable, controllable universe, to shrink things to a scale we can comprehend. But trying to understand this post-factual world has become exhausting and ridiculous. We look for ways to bring the fever down, but sitting by the bird feeder with a warm cup of herbal tea just doesn’t cut it.

Therapists who treat patients for anxiety disorder often use a technique called “grounding.” They put a rock in your hands or a piece of wood and ask you to describe what it feels like. The physical sensations of cold stone and the smell of the wood pull you back to earth and calm you. My friends in the Native community tell me that whenever a kid gets into difficulty, the first thing they do is put a coat and boots on him and take him out to the bush for a few days. 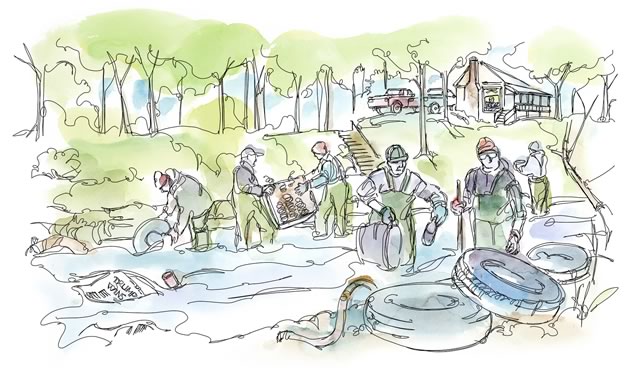 Real change happens when a group of like-minded people get together on a Saturday morning to pull old tires and bedsprings out of a river. Illustration by Shelagh Armstrong.

For my own part, I discovered at an early age that people who work outside with their hands tend to be more grounded than the rest of the population, and I have always sought their company. Cattle farmers were my therapists then and still are. Farmers have their fits and furies, to be sure, but because there is no such thing as a post-truth cow or an alternative-fact chicken, they tend not to spin off into strange territory the way politicians and hedge fund managers do.

That’s why, whenever I feel anxiety building to an uncomfortable level, I pull up a chair at the Table of Truth in Paula’s Pantry or join the G-4 meetings at Gramma Giffen’s lunch counter down in the Glen. These are hangouts for people whom the humorist Garrison Keillor once described as Happy Lutherans, folks who don’t obsess about fine points of doctrine the way their dark and brooding cousins do. If they do speak up during a debate, it is usually to ask a question like, “Hadn’t thought about it either way, but if you’re coming on Sunday, would you bring a hot dish?”

A few days after Trump was elected last November, I attended a Landowner Appreciation Night for the Credit River Conservation Authority. Awards were handed out to volunteers who have been working anywhere from 10 to 50 years to restore the water quality of the river, and they were celebrating the fact that the river once again supports a sport trout fishery. It struck me this was real change. Real change is always slow, incremental and very quiet. It does not come from places like Queen’s Park, or Ottawa or Washington. It happens when a group of like-minded people get together on a Saturday morning to pull old tires and bedsprings out of a river. The evening reminded me that the arc of the moral universe may be long, but it does bend toward less stupidity and more civility.

About the same time, I attended two fundraisers, one for a Caledon heritage group that has waged a slow and steady effort to preserve the historic homes of the neighbourhood, another for DAREarts, which uses art to intervene in the lives of at-risk youth. Then I went to an event in Creemore where a hundred people turned out to watch a group of amateurs stumble through a program of elegant poetry and wretchedly low comedy to mark the 400th anniversary of Shakespeare’s death. They were following a pattern laid down by their forebears that shows how nonsense can make perfect sense of a Canadian winter. All these evenings made me feel better and reminded me that whenever collective trauma strikes, self-care is the worst therapy we can give ourselves. We must be up and doing, as grandmother used to say.

Isolation is the biggest threat to our lives and there is only one way to deal with that. We must shoulder our way into a human community and try to do good work.