How the birth of the Dominion was celebrated in the hills.

When the Speaker gavelled in the second order of business in the British House of Commons on March 29, 1867, every seat was filled.

Not a single Member of Parliament failed to appreciate the vital importance of the issue on the table: a tax on dogs. Yet only two hours earlier, party whips had to search hallways, coffee shops and hotel lobbies for enough MPs to finish up the first matter of that day: passing the British North America Act to create the Dominion of Canada. The honourable members, it seems, had their priorities.

An ocean away in Canada West, the Orangeville Sun seemed to reflect the same mood, for its report that the BNA Act had passed got far less prominence than advertisements proclaiming the benefits of Dr. Bird’s Pulmonic Syrup (for coughs, colds, asthma and consumption) or the announcement that Drs. Trotter and Graham would be available to attend to the dental needs of Erin residents on the first and second Tuesdays of each month.

That was in March. However, by the first of July – Queen Victoria picked the official date – the idea of Confederation or at least the idea of a party to celebrate it, had gained momentum in these hills. Posters announcing a celebration in the village of Orangeville, for example, spread throughout the area. At least one found its way to Hockley and enticed a good number of citizens to make the trek. Another made it to Buckstown – still two years away from becoming part of Palgrave – where innkeeper Bucky Dolan of the Crossroads Tavern displayed it for his customers.

There is no confirmation that a poster graced the walls of William Jelly’s tavern, the heart and soul of Jelly’s Town (Shelburne), but since the official name of this drinking emporium was the British-Canadian Hotel, it’s reasonable to assume that the first Dominion Day was honoured there with a raised glass or two.

Too tired for a party?

Farther south in the brand new County of Peel the idea of celebrating Dominion Day had a harder time attracting official interest. In 1867 Peel was exhausted after years of fierce political debate. In 1856 the decision had been made to separate from the County of York, but it was followed by a prolonged squabble over which community would be the county seat. Just ten days before Canada’s official beginning, the Brampton Times was pretty much ignoring Dominion Day, preferring to offer news of a bar brawl in Streetsville and an account of the funeral of David Livingston of “Dr. Livingston, I presume?” fame.

Closer to July 1, the Times featured a story of how a live frog was removed from the stomach of a woman in Terre Haute, Indiana, and devoted a mere inch and a half of column to harrumph that whereas “we are glad to note that committees [elsewhere] are making arrangements for the proper celebration of Confederation Day, as yet [in Brampton] we hear of nothing being done.”

As it turned out, the big day was rather quiet in Brampton. But quite likely some of its citizens – those who didn’t opt for Toronto via the Grand Trunk Railway – chose to travel north to mark the occasion, a reasonably easy undertaking for there were two stage lines connecting to Orangeville. Even better, in 1867 the two lines were hotly engaged in a price war. 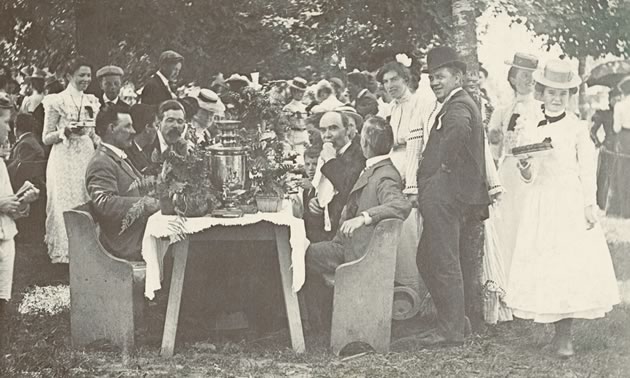 In Alexandra Park, Orangeville celebrated Dominion Day c.1890 with a picnic. Over the years following 1867, Orangeville developed a well-deserved reputation for offering Dominion Day festivities that ranked among the best in the province. Dufferin County Museum & Archives P-0586.

Orangeville whoops it up!

Those who made the trip to Orangeville disembarked in sunny but somewhat muggy weather and joined a crowd the Sun said was “determined to celebrate with loyal hearts and joyous demonstrations.”

There was a good mood here. The Orangeville Infantry Company, for the moment content to forget about Fenian invasions and imagined threats from predominantly Catholic Adjala Township, began the festivities with a display of “military motions” before marching to Broadway where they tested eardrums by firing an enthusiastic feu de joie.

They were then congratulated by their commander who chose the occasion to announce they would soon be issued new, improved rifles. Probably a good thing too, for in the target-shooting competition that followed – invitations had been issued to the Whittingdon, Mono Mills and Alton companies – they were handily outshot by the boys from Mono Mills.

Cricket and soccer games occupied the rest of the morning with the afternoon being taken up by foot races, hurdle jumping, sack and wheelbarrow races (participants were blindfolded), as well as other amusements the Sun reservedly pronounced “more or less entertaining.”

Everybody loves a picnic

Picnics dotted these hills on that very special July 1st for they were an entertainment even the smallest communities could organize with relative ease. People celebrated in Hillsburgh, in Belfountain and Paisley (Caledon East). There were picnics in Rosemont and Joice’s Corners (officially Luther and later Grand Valley), even in Salmonville (Terra Cotta) where salmon were once reputed to be so thick in the Credit River they could be scooped out with your hands.

Naturally, large centres could offer more sophisticated entertainment. Toronto and Guelph had elaborate celebrations complete with parades and fireworks. Toronto’s parade even boasted a regiment of Hussars that in the previous decade had been part of the famous Charge of the Light Brigade. But getting to these cities from the hills was expensive and time-consuming. In 1867 between Hillsburgh and Guelph, for example, there were five toll gates on the road and fully 16 hotels and taverns to refresh – not to mention delay – the weary traveller.

Local picnics were thus the dominant theme of the day. In Bolton Village, Division No. 211 of the Sons of Temperance served tea, though patrons seeking a more aggressive libation in that community of a few hundred souls had five licensed hotels to choose from. How extensively these latter establishments were frequented on our first Dominion Day is open to speculation, but given their ratio by population (Orangeville’s 600 people were served by 13 hotels; tiny Charleston, later Caledon Village, had three; Shelburne offered five), it seems they must have been popular.

Indeed in Orangeville, the Sun observed that by the end of the day, the streets of the village “presented a very animated appearance.”

Still, we didn’t overdo it

Nevertheless the Sun also went on to report that as darkness fell on that first Dominion Day, the stalwart pioneers of these hills chose the path of responsibility, as “men and women who had dallied with time suddenly thought of their homes, and all kinds of vehicles from the heavy lumber wagon to the easy, graceful carriage were called into requisition to bear them thither. The tumults of the day settled into a calm eve.”

It was all very Canadian. 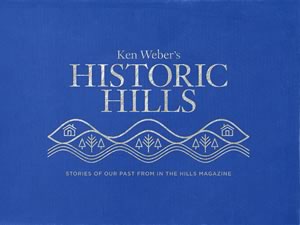 This column by Ken Weber first appeared in the summer 1996 issue of In The Hills and was his first contribution to the magazine. In the 20-some years since, Ken has written more than 80 “Historic Hills” columns for the magazine (along with his regular last page “Puzzling Conclusion”).

This fall, a selection of those columns will be published in his new book, Ken Weber’s Historic Hills. An official book launch will take place on October 15 at 2 p.m. at Dufferin County Museum & Archives.

Earlier in the fall, Ken will bring together his enthusiasm for history and puzzles when he emcees a Canadian Beer & Trivia night at the museum on the evening of Saturday, September 23. For details and tickets ($20), see dufferinmuseum.com.

“O Mesopelagia! We stand on guard for thee!”

Once the Fathers of Confederation agreed there was going to be a country, they gave brief consideration to a new name for it. The suggestions brought forward included Albionoria, Borealia, Ursalia, Mesopelagia and other polysyllabic mouthfuls. Popular legend has it that when none of these offerings attracted support, Samuel Tilley, a daily reader of the Bible (and a Father from New Brunswick who was really not all that keen about Confederation), proposed sticking with “Canada” and adding “‘Dominion” as in Psalm 72:8 (“His Dominion shall be also from sea to sea”). So Dominion of Canada it became. Although the British readily substituted “Dominion” for “colony,” the Canadian government began phasing out the term as early as World War II. Nevertheless, July 1 officially remained “Dominion Day” in Canada until October 1982 when Parliament declared it “Canada Day.”