Signs the Bubble May Burst

“Painted barns are a symptom of an overheated economy, just like the whiz kids driving around downtown Toronto in a BMW with two payments made on it.” 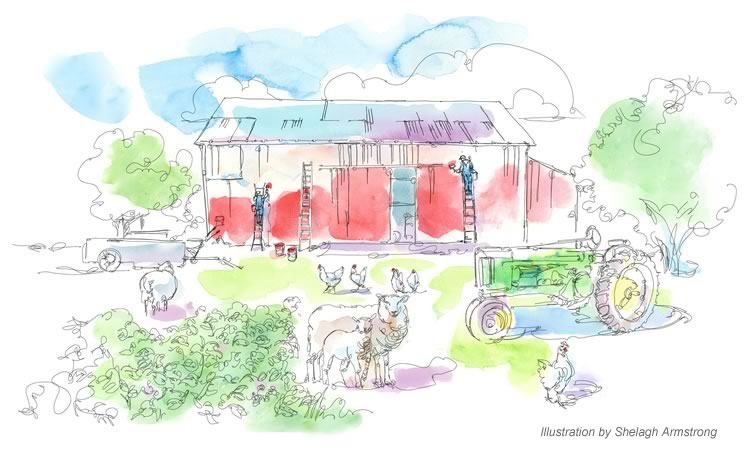 This week a man drove in and offered to sell me a large aerial photo of my farm. It gave me an odd feeling because the last time I saw one of these guys was around my birthday in the summer of 2000 when Nortel shares had reached an all-time high of $124.50. The photographer presented me with clear evidence the dot-com bubble was about to burst. All the warning signs were right there in the photo, but I failed to see them and was caught as flat-footed as everyone else.

The governor of the central bank sifts through a pile of reports looking for danger signs before he makes any pronouncement on interest rates. I have often thought of sending him that photo because it offers a flashing red warning light that fairly shouts “market over-exuberance.”

First, there are three horses in the pasture, swatting flies and doing nothing in particular. That is a very dangerous signal. No one needs or can really afford a horse to start with, and three of them are totally unsustainable. In the front yard is a small flock of extremely rare Euskal Oiloa chickens from the Basque region of Spain. This is a breed that prefers extinction and only those who view the world through rose-coloured glasses really believe these birds have any place on a farm. Then there’s the expensive purebred Leicester ram, on its knees coughing. There’s a third tractor, the garden is planted in kale…

But the clearest sign of pathology is the fresh coat of paint on the barn. There must have been a lot of paint because the henhouse is done too. Barns and henhouses don’t really need to be painted any more than dogs need their teeth flossed or horses need Tai Chi lessons. Painted barns are a symptom of an overheated economy, just like the whiz kids driving around downtown Toronto in a BMW with two payments made on it.

I remember the barn painting crew drove into the neighbourhood one morning and found my neighbour Hughie out thinning apples from the top of a ladder. The driver rolled down the window of his battered truck and yelled, “I paint your barn for a thousand dollars. What do you say?”

“What kind of paint do you use?” asked Hughie, who didn’t really need his barn painted.

“I do it for five hundred…and put eavestroughs on it too.”

At that price, Hughie didn’t care what kind of paint they were using. But he did need eavestroughs, so he put them to work. He was curious how this character could do the job so cheaply. It turned out he was gathering up all the whoops buckets from hardware stores. They were happy to give them away because they didn’t have to pay expensive landfill charges, and he was happy to mix it all up in one big drum and go painting barns sort of brown at rock-bottom prices. For a small surcharge he could nudge the colour toward another part of the spectrum. Hughie steered him over to my place and the crew painted my barn sort of red for an extra 50 bucks.

The rest is history. A month later Nortel shares suddenly collapsed and never recovered. The TSE 300 lost 15 per cent of its value by Christmas. By spring, young people were wearing ties again at the office and we entered the disappointment phase of the digital revolution. Hughie and I shook our heads in wonder. “The signs were so clear,” he said. “Why couldn’t we see them?”

But this week, I study the new photo and decide things look pretty healthy, all things considered. The horses are gone, the sheep are sturdy, honest crossbreds, the chickens are the same ones you get at Swiss Chalet, and there’s only one tractor. The garden is planted almost entirely to potatoes.

There is a fresh coat of paint on the barn. But my son and I painted it ourselves with a five-gallon whoops bucket from Home Depot we got on sale for 30 bucks. It’s sort of red. And we just did the side you can see from the road.

Our forward guidance for the economy is cautiously optimistic.

Author and playwright Dan Needles will be reading from his new book, True Confessions from the Ninth Concession, a collection from 20 years of his columns for In The Hills and other publications, on November 16 along with Cecily Ross (The Lost Diaries of Susanna Moodie – see excerpt in our summer ’17 issue) and Bianca Marais (Hum If You Don’t Know the Words). The event is part of the Authors on Stage series at Theatre Orangeville.