Dave Moule: One of our 2017 Local Heroes

In The Tipping Point, Malcolm Gladwell categorizes people as mavens (those who sit behind a computer and research stuff), connectors (those who always know the right person for the job) and salespeople (those who make you happy to spend $40 when $20 was your grudgingly arrived-at limit). Occasionally, according to Gladwell, you get three in one: someone who is accomplished at all these things. 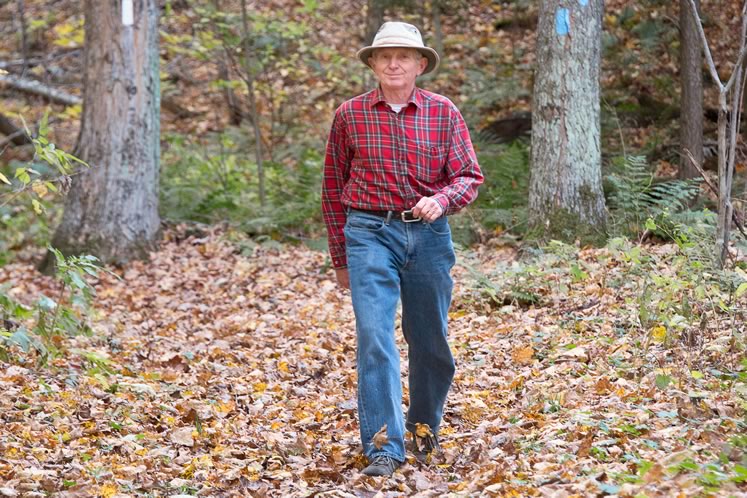 Dave’s fascination with trails began in the early 1980s when he decided to hike the Grand Canyon and selected the Bruce Trail as his training course. Photo by Pete Paterson.

Dave Moule is such a someone. Dave the maven is an engineer who designed, built and uses both track-setting and grooming equipment for 14 kilometres of cross-country ski trails he now shares with others on his farm in Mono. Dave the connector knows all his landowning neighbours, and Dave the salesperson persuaded most of them to allow his ski trails and, often, the Bruce Trail to cross their land.

Dave’s fascination with trails began in the early 1980s when he decided to hike the Grand Canyon and selected the Bruce Trail as his training course. “I noticed some parts of the trail needed repair,” he says. This was enough to make him volunteer. “If you use the trail, you have an obligation to help.”

He then adopted a section of trail miles away on the Bruce Peninsula, a stretch he continues to maintain. Since then he has served in numerous volunteer posts with both the Bruce Trail Conservancy and the Caledon Bruce Trail Club, and is now serving his second stint as trail director for the entire trail.

Dave’s commitment doesn’t stop at volunteering. In 1993, he and his wife Sally Cohen purchased the property partially because it was on the Bruce Trail’s optimum route. Then, kilometre by kilometre, landowner by landowner, neighbour by neighbour, he and fellow volunteer Carol Sheppard pieced together access for the Bruce Trail from 5 Sideroad, just east of Airport Road, to the 5th Line near Hockley Road.

He relates how in 2008 Carol had handshake agreements with all the neighbouring landowners except one. When the missing piece came up for sale, he and Sally stepped up to the plate again. They bought the 85-acre property to fill in the last gap. Called the Hemlock Ridge property, it rises to lofty heights, including a pair of peaks called “Sally’s Pinnacle” and “Dave’s Pinnacle.” The latter marks the highest point on the property.

Dave recalls building this section of trail: “In the winter of 2008-09, I went out repeatedly on snowshoes with a topo map to find the best route.” That spring he took part in five work parties of 30 to 40 volunteers. “It was pretty rewarding when we completed it,” he says.

Dave and Sally’s involvement goes even further. Always on the lookout for creative ways to raise money for the Bruce Trail Conservancy, they took advantage of their location along “Christmas tree alley,” as some people call the area north of Highway 9. “It was really Sally’s idea,” Dave explains. In the late 1990s, they began planting Scots pines until, at one point and with the help of Bruce Trail volunteers, they were pruning and caring for 1,200 trees. For each of the past ten or so years, the Bruce Trail has received about $2,500 from their cut-your-own Christmas tree operation. It’s yet another venture that makes Dave happy.

And having numerous projects on the go seems to be what makes Dave the maven-connector-salesperson tick. Says Sally, “Dave can’t sit still.”