The Case for Civility

That made me think – grumpy old middle-class white guys who live in the country? 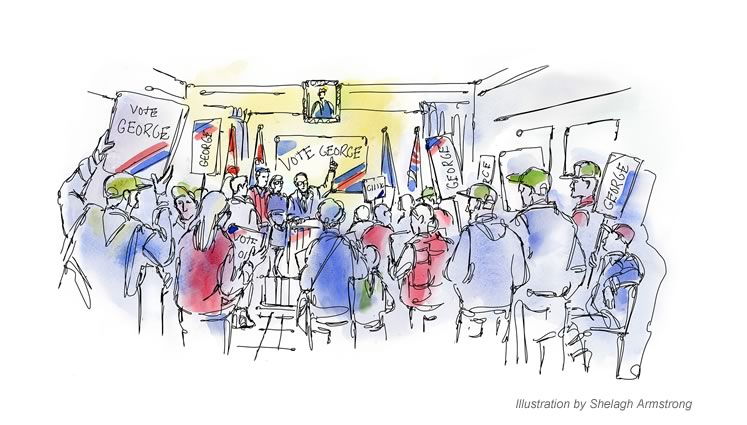 I was born on a tree-lined street in North Toronto, the middle child of two artists who were free-thinking, Socialist, pacifist, Volkswagen-driving tree-huggers. If we had stayed put in the city, chances are I might have followed in their footsteps.

But when I was still in public school, my mother bought a windswept pasture farm on the Seventh Line near Rosemont, and planted me in a neighbourhood of heavily armed Presbyterian cattle farmers who thought trees were noxious weeds. For some reason, probably the usual adolescent male fascination with explosives and dangerous machinery, I drifted away from the beliefs of my parents and let those farmers shape the way I looked at the world. At the age of 26, I shocked my mother by putting on a blue suit and going to work as a speechwriter in the Conservative government of Bill Davis at Queen’s Park.

I came to my conservatism through the back door. Late one night, when I was sweeping up at the Shelburne newspaper office where I worked as the editor, George McCague, the candidate for the Tory nomination, tapped at the mailroom door and asked if I would be interested in writing material for his campaign.

I said, “How do you know I’m a Conservative?”

“I don’t,” he answered. “Right now I need a writer more than I need a Conservative.”

It was hard to resist someone who talked like that. George got the nomination and won the election by the narrowest of margins, and I followed him for the next five years, all the way back to the city and into the carpeted corridors of power. Ever since those days, I have remained a small ‘c’ conservative, largely because of George’s influence.

It’s been getting harder. The experts tell us Donald Trump got elected last year because older, middle-class, white males from the flyover states were angry about government’s failure to address the problems in their lives.

That made me think – grumpy old middle-class white guys who live in the country? That sounded a lot like me. Had I become a Trump supporter? I didn’t think so, because I believe a society must remain civil if it’s going to continue to be a civil society. But is that all a Conservative can be these days? Are we just grumpy old white guys from the country?

The original definition of a conservative used to be a grumpy Englishman who was opposed to the idea of removing James II from the succession to the British throne. “Tory” was an Irish word that meant “outlaw” and it was used to lambaste those supporters of James II. I learned at university that a Conservative could also be someone who is cautious about change and anxious to hold onto those things which are good.

That idea made sense to me, just as it made sense to the farmers of my township who had been sending Conservatives to Queen’s Park in an unbroken streak since Confederation. The closest they ever came to electing a Liberal was the year I started writing speeches for George. It was a sobering moment and I learned very quickly that farmers are skeptical people who are not swayed by an elegant phrase or a flashy new idea. I also knew them to be tolerant people because they had been tolerating me for a number of years by that point.

Today the grumpy old white guys I know are mostly very successful people from other professions who should be on top of the world. The last 50 years have been extremely generous to them, and yet they walk around talking as if the socialists have burned their villages and carried off their women. They haven’t earned their grumpiness any more than my children have earned their cynicism about politics.

George never forgot that nail-biter election of 1975 and he always said to me, “You can’t win this riding without a few Liberal votes.” And he made it a rule of his life to be civil and not to antagonize a Liberal or anyone else if he could help it. He stayed in office for four terms and served another 12 years as the mayor of his hometown. Even my mother voted for him.

At his funeral, the church leaflet carried a passage from Scripture that summed up his view of public service: “Like good stewards of the manifold grace of God, serve one another with whatever gift each of you has received.”

Nothing at all grumpy about that.

Author and playwright Dan Needles’ new book, True Confessions from the Ninth Concession, a collection from 20 years of his columns for this magazine and others, was published this fall. His latest play, The Last Christmas Turkey, premieres at Theatre Orangeville on November 30.