As someone old enough to remember the dinging bell of the carriage return on manual typewriters, I suffer an elevated degree of anxiety when I hear the words “computer glitch” – bands of tightness across the upper rib cage, squinting in the eye area, dry mouth.

My Internet provider recently asked me to change my access code. Sounded easy enough, particularly as the techie on the other end of the phone seemed confident and knowledgeable. The job was completed with a few keystrokes –  and the creation of yet another dreaded password. “That should do it,” he said cheerily.

Well, as it happens, no. The next day I discovered my computer was no longer talking to my printer. Rats! I should have known it wouldn’t be that simple. A call to the service provider produced the expected answer: “We can’t do anything about printer problems.” So it was on to the chat line with the printer manufacturer.

Four hours later, bleary-eyed and cranky, I was no further ahead, even though, following the patient instructions of the person on the other end of the chat line, I had unplugged, replugged and reconfigured the mass of wires hiding behind my desk. In the process I had produced nearly 50 pages of reports on printer settings.

Time to call in the experts. In my experience, computer experts are often barely out of their teens and speak an inscrutable language. Not this time. Ken Wynne, 63 years old and recommended by a friend, turned out to be a delightful surprise.

Shortly after he retired from a career in computers and banking, Ken discovered Seniors Helping Seniors, offered by Caledon Community Services, a registered charity that identifies and responds to community needs. His discovery set him on a personal path to help seniors with a fear of computers, and to “light the spark” for those who might not have had the opportunity to understand a  computer’s relevance to everyday living.

During Ken’s six years’ teaching computer know-how to seniors in Caledon East, he has learned to classify their needs into three categories: social (connecting and staying connected with family and friends by sharing photos, recipes, gardening tips, etc.); informational, which he defines as learning (how to fix a faucet or name a flower, bird, etc.); and transactional (banking, booking a flight or ordering a parking permit). His classes involve teaching students how to safely use their computers, demystifying each category in the process. 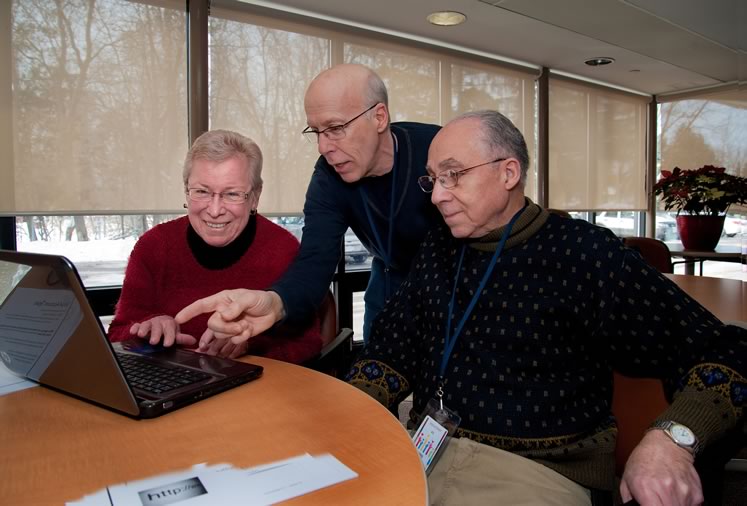 Ken has also opened up the world of online forums to students who want to broaden their knowledge in one particular subject, such as gardening or the quirks of a specific car. He put a carpentry student in touch with suppliers of unusual items used to fix tools and taught students how to use Skype. The day I joined his class, they were discussing the benefits of Google Chrome and how to use an ad-blocking app, clear a browser and go incognito.

Mary Ruggles, 88, enjoys the time she spends in Ken’s class – when she can wedge it in between her skiing and tennis pursuits. She describes him as exceptionally well-informed and capable, and says he’s doing a difficult job superbly. “The people who come to these classes have different skill levels, knowledge and capabilities when it comes to computers,” says Mary, a former math teacher and guidance counsellor. “This challenges a teacher. But I’m grateful that Caledon Community Services has acknowledged and met this need in our community. Ken’s time, knowledge and enthusiasm are thoroughly appreciated by our group.”

Ken’s students often bring their own computers to class, only to discover hardware or software problems. If the problem is readily solvable, Ken will either fix it on the spot or work with a student before or after class to get rid of the glitch. As a result, another career has opened up for him: computer repair and training, which he offers through his company Technology 411. His client base has grown with his reputation, so he now spends as much time fixing computers as he does teaching.

I’m so pleased to have found Ken. He solved my printer communication problem in a flash and even offered some one-on-one time to clear up a few areas of confusion for me.

Back to the dreaded passwords. Ken encourages his students to create “pass phrases,” at least eight characters long, with random capitals and a number or two thrown in. For instance, IloveTOgolf2. Now that’s something I would remember. The name of a favourite TV show would work, so would the kind of car you drive.

Now that I have Ken’s contact information, the words “computer glitch” have lost their power.

Gail Grant is a freelance writer who lives in Palgrave.
Show 2 Comments