When my mom asked me to bring dessert for a recent family celebration, I panicked. 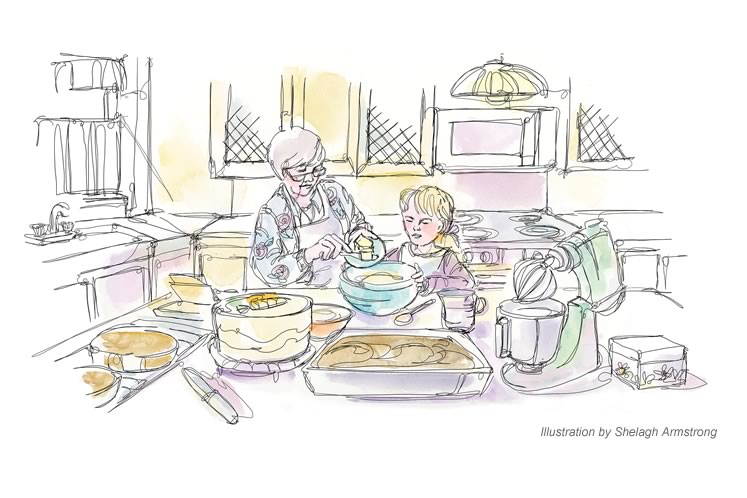 I scrambled to think of something I could make – but ended up drifting through the cheese aisle, dreaming of cheese platters and salty crisps, with maybe some grapes or figs. Not one dessert idea popped into my mind or one ingredient into my cart.

If I have a choice of what to contribute to dinner, I always offer a main or side dish or appetizer, and avoid the desserts. It’s not that my taste buds don’t enjoy sweetness, it’s just that my brain doesn’t seem to speak dessert. Tongue and tummy, yes; brain and batter, not so much.

Mom did some baking when she was growing up, but like me, she was not a baker at heart. A masterful cook, able to whip up a curry or stew, not afraid to tackle flavours of the world and work with a budget, she can create the best meals I’ve ever had. And she does have a few desserts in her core repertoire. Peach and apple pies are really tops. The tin pan she makes them in is ancient and thin, its edges blackened from generations of pie makers, I like to believe.

We’ve tried making pastry and a few times have been successful. I’ll admit, though, it’s usually premade by Tenderflake, and it does the trick just fine. We fill the inside with an easy mix of fresh apples or peaches, a tiny sprinkle of cinnamon and sugar, and a little flour to thicken the saucy middle. The fruit, local and fresh, makes the pie sing; we’re just there to support its appearance. Topped with granulated sugar in the last few minutes of baking, to caramelize and crust the edges, and served with a generous dollop of real whipped cream, you can imagine why these pies have been a heavenly and oft-requested end to a happy meal in our home.

My nan (on my mom’s side) really didn’t bake much. She was good for Toronto treats – chocolatey Hostess cupcakes or a baked cake in a foil pan, from a time when real bakers actually worked in the store bakery and measured and toiled over their production line. My brother and I would help unpack Nan’s grocery bags to see what awaited. She did produce her own very traditional mince tarts and pudding every year at this time, but they were a bit daunting for us little ones – too mysterious for young palates, though caramel sauce poured over ice cream was a welcome treat.

It is on my dad’s side that the recessive baking gene exists. Dad’s mom was a fabulous baker, widely known for her “squares” and for serving dessert after pretty much every meal, sometimes even between meals. Little cakes with hand-whipped icing, cut into squares, were just enough that two or three samples enjoyed with a stiff coffee would wake you up after a long meal and before the drive home. When I had a kitchen of my own, I started trying to bake a few of her delicious recipes.

Elizabeth, or Betty as she was known, though Gramma to me, started sending me home with a few of her little white recipe cards. The 3×5-inch cards were topped with one red line, for the recipe name, followed by thin blue lines on which Gramma set out the ingredients and instructions in her tidy, feminine script. I believed dessert making was her calling. Indeed, she worked at the Rowntree factory in Toronto making chocolates at one time – how perfectly sweet.

One of her favourite recipes was Toffee Bars, sweet but not overly so, with a secret ingredient that made for a good, mouthy chew. She also shared her carrot cake recipe, which is simply divine – heavy, moist, full of pineapple bits, shredded carrots, walnuts and coconut. She captured sunshine and figured out how to mix it right into that jewel-like cake. A special card accompanies the recipe – for cream cheese icing and a buttermilk version.

When Gramma died, quietly and quickly, and too soon to meet my son Adrian for the first time, her recipes were what everyone wanted to remember her by.

However, even though she had the gene, I didn’t inherit it! I will taste test your desserts and almost certainly enjoy them, and I promise to pay attention and herald your baking triumphs. Proof: Joanne, I adore your sludgey black brownies. Dense, dark and delicious, their crackled tops tempt us to sin. Tanya, your cardamom madeleines are tiny, airy pockets of flavour, with just a blush of an edge that makes them a perfect accompaniment to an Indian feast followed by tea. Christina, you have a natural gift for pastry and your handheld flat pies are ingenious. Filled with seasonal fruit and served in a napkin, their home-baked goodness is devoured by kids and adults alike.

For now, I will remain jealous of your stand mixers, my friends. I will bring the cheese and baguette, and you bring the desserts! Come Christmas, we’ll be a match made in heaven.

Celebrate the icy season by sliding into the Orangeville Library on Mill Street for a family matinée of Frozen on December 15 at 2pm. No reservation is required for this favourite film of young and old alike. The library offers a monthly family-friendly movie at no charge. For coming titles see orangevillelibrary.ca.

First time skiing for you or your kids? Try Hockley Valley Resort’s Magic Carpet! It’s a giant conveyor belt that novice skiers and boarders can hop on to get back up the hill. It’s easy-peasy and almost as much fun as going down – and so much friendlier for newbies than trying to master tow ropes or the dreaded T-bar. Hockley offers lessons for all levels, super close to home. hockley.com/ski-and-board

A Path to Understanding

Let’s Get Every Child Ready to Read

The Hills are Alive!

From classical choral music to big band and jazz, to traditional carols, the hills are definitely alive with the sounds of the season. The holidays offer a great opportunity to get the family out to hear live music, and maybe even sing along, in theatres, churches and community halls. Check out the Music section of What’s On.

Beat the post-holiday letdown and embrace winter in all its glory at Alton Mill’s annual Fire & Ice Festival on January 19 and 20. There will be ice carving, skating and curling on the millpond, a snow slide, bonfires and plenty of food and drink, as well as indoor art activities when you need to take the chill off.  And, of course there’s hockey. On Saturday, teams compete in the famous Millpond Classic. How Canadian can you get? You’ll find all the details at altonmill.ca.