After more than three decades serving her community as a rural mail carrier, Connie Tersigni decided to retire last December. “Mostly, I loved my job, but the decision came down to one word — ice,” she says. Connie had tumbled in each of the past three years, and at 65, she didn’t want to chance another fall. 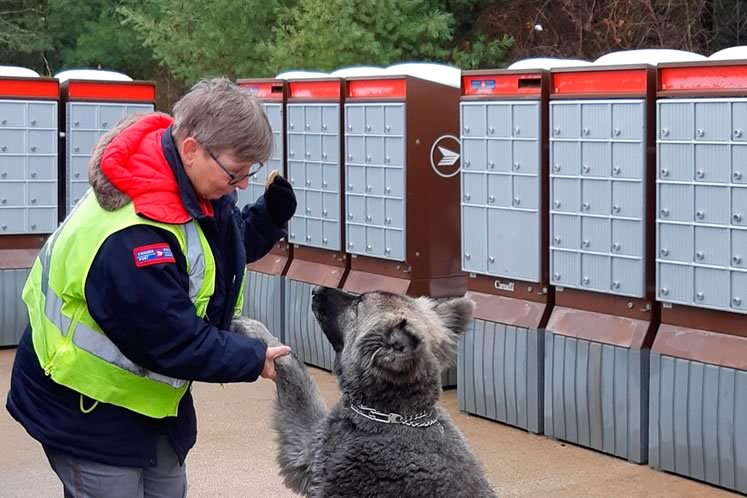 On her last day as a rural mail carrier, Connie Tersigni bade farewell to Beau, who would miss his treats. Photo by Bernie Rochon.

Her familiar face and cheerful wave were part of the tapestry of the community around Palgrave, where she could be counted on to go the extra mile. If a parcel was too big for the mailbox, customers would find it on their doorstep. And her van was never without dog treats. She got to know most of the local mutts by name, and her supply of treats ensured that nearly all of them greeted her enthusiastically.

The eldest of three daughters, Connie grew up on a farm near Bervie in Bruce County. After studying food technology, she moved to Toronto to take a job at Humber Memorial Hospital and met her husband, Gino. The couple later moved to Orangeville to start their family.

In 1989, Connie successfully bid for a rural mail route, which offered independence and flexibility for a mom with young children. Most rural and suburban mail couriers, or RSMCs, were — and are — women. As independent contractors at the time, RSMCs were paid less than Canada Post employees and didn’t enjoy the same job rights and benefits. “We had some really strong, independent women who felt that we deserved to be part of the union,” says Connie. Their struggle was long and hard, but they ultimately prevailed. In 2004, RSMCs became members of the Canadian Union of Postal Workers.

When Connie started her route, there were no street numbers in Caledon. Her route initially encompassed 525 “points of call,” in Canada Post parlance. Of those, more than 430 received their mail at the same postal address — RR#1, Palgrave. So Connie had to learn each customer’s location and the name of everyone in each household. Her route eventually topped 800 homes.

“I remember the head scratchers, such as an annual letter addressed to Aunt Gladie, RR#1, Palgrave,” she says. I eventually figured out who that was, but it took me a while to sort out the three Jim Robinsons I had on my route, plus the names of each of their wives, and which bank statement went where.”

Though mail volume has dropped dramatically since the arrival of email, the Covid situation and the uptick in online shopping has bumped up the number of packages requiring distribution. “I’m off the job now, but I still have great respect for those responsible for getting packages to doorsteps in a timely fashion,” Connie says.