When the winter wind blows and the flakes fly, snowplow operator Bruce Crawford is ready to go to work.

After sunset, snow begins like a fog, dusting the trees and skittering across roadways. Cold gusts herald the coming wind. By midnight, snow fills the air, hurled by the storm. The wind howls at our windows and blows cold drafts through chinks in our walls. As we burrow deeper under the covers, Bruce Crawford’s feet hit the cold floor. Bruce is public works foreman in Mulmur Township – and one of the unheralded snowplow operators who work the small hours, clearing the winter roads, so we can drive by morning. His beat is the southeast corner of Mulmur, north of Highway 89, both sides of Airport Road.

2:30 a.m. The alarm on the bedside table begins to sound and Bruce shuts it off right away. He’s already half awake, listening to the wind. He checks the forecast on his phone and sees he’ll have his work cut out for him this day.

2:45 a.m. In the kitchen, he’s making coffee, a couple of sandwiches and snacks. “It’s too early to have anything to eat,” he says. He’ll do half a day’s work before breakfast.

3:00 a.m. The pickup is just starting to get warm as Bruce leaves home in Stayner, headed toward Terra Nova. When the night is clear, he may take a longer route to check the condition of a couple of roads on the way down, but when the snow is already drifting, he heads straight for the works yard to get a good start. 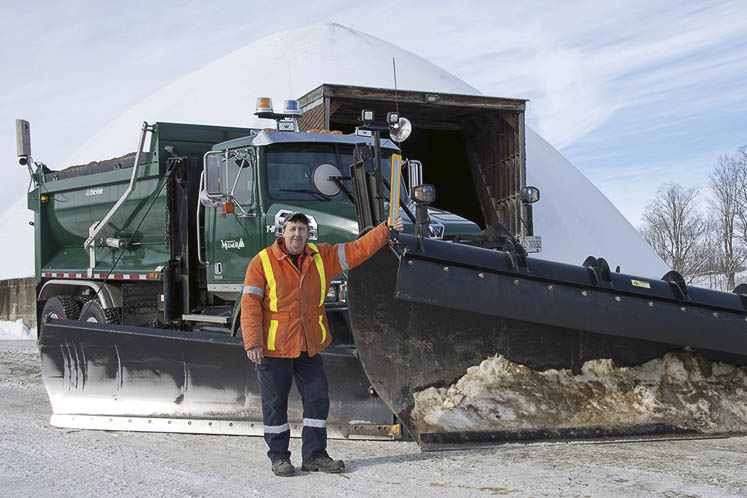 If the sun is up, snowplow operator Bruce Crawford is nearing the end of an overnight shift clearing roads for residents of Dufferin County. Photography by Pete Paterson.

3:30 a.m. He arrives at the Mulmur Township works yard deep in the Pine River valley, north of Terra Nova. Cold gusts swirl snow around the lights like bugs in the summertime. Bruce is one of the early crew’s six people who drive the three graders and three trucks with plows attached to the front. A fourth truck is available in case one of the vehicles breaks down.

“There are roughly 300 kilometres of roads in the township, but some of them we don’t look after in winter,” says Bruce. Each vehicle has a designated route. “We do two passes – on the way out and on the way back – to clear both sides. That takes about four and a half hours, and there are some days where you get done and you’ve got to go back out and do it again.”

The graders are ready to go first. They clear the gravel roads and, with carbide teeth on the bottom of their blades, scratch into the gravel to break up the surface to provide better traction. Meanwhile, the trucks are taking on mixed loads of salt and sand.

4:00 a.m. Bruce climbs into his plow, a Western Star tandem-axle truck with a 430 horsepower engine and a plow that will clear a four-metre swath. With a full load of sand and salt, it weighs 27 tons. He has done the inspection – oil level, tires, lights – and filled the dump box. He heads south on the Fifth Line from the 20th Sideroad to Highway 89, then north on the Seventh Line, pushing the snow off the road and spreading salt and sand as he goes.

“We try to leave some snow on the shoulder to help slow down any vehicles that go off the road,” says Bruce. “But if it’s going to rain, we clear them so the roads drain.”

Bruce knows these roads well. He has lived in the area all his life. Growing up south of Honeywood, he attended Centennial Hylands Elementary and Centre Dufferin District High School in Shelburne. For many years he drove transport with long hauls into the United States. He has two grown kids but is not with their mother. “The trucking industry is hard on relationships,” he says. “You’re away from home a lot.”

Ten years ago he decided to stick closer to home and started clearing roads in Mulmur. “I thought I’d settle down,” he says. Then he met his fiancée, Brenda Rabson, and they bought a house in Stayner.

“I really enjoy the snow removal, so that’s what made me venture into this,” he says. He relishes a challenge and there’s a steep learning curve to driving a plow on Mulmur roads. “I started here with a good bunch of guys who taught me a lot.”

Although Bruce knows where the tough spots are along his route, he still sometimes finds himself sliding backwards down a hill or up against a drift that his 430 horses can’t budge.

“On the Fifth Line near Mansfield Ski Club, it can blow in … Sometimes it plugs right up and we have to get a tractor-mounted snowblower to clear the drifts.”

7:00 a.m. Time for breakfast. The school boards have decided schools will be open, so the buses are setting out. Bruce pulls over, out of the way, and takes a few minutes for coffee and a snack.

7:15 a.m. Back on the road. He has pushed the snow off the main roads, but now there are five subdivisions to clear.

One thing Bruce would like from some drivers is a little more patience. “We go slow for a reason … on narrow roads we’ve got to be more careful … or we need to get the right coverage of grit on the road … or we have a tight turn coming up. When we have a chance, we’ll slow right down or pull over to let drivers go by.”

8:30 a.m. He’s back in the yard. He’ll likely go out again, so he refills the dump box before taking a break for lunch.

9:00 a.m. The storm isn’t letting up, so Bruce heads out for another round. He knows where the bad spots are along his route and where he’ll need to clear off the snow again.

12 noon He drives the truck back to the yard, fuels up, inspects the tires and oil level, and puts the rig back in the garage. The afternoon shift is arriving, two people to continue keeping the roads clear for the drive home. They’ll work till 8:30 p.m., about the time Bruce will be setting his alarm for the next morning. 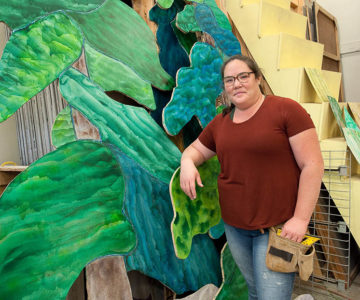 Jigsaws and Routers and Drills, Oh My!

Theatre Orangeville’s technical director, Lisa Lahue, gets her hands dirty as she helps create the imagined worlds that enchant theatregoers. 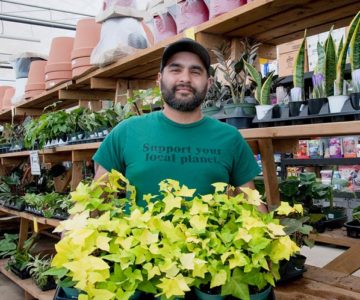 A typical day for Nishan Kooner of 10 and 10 Garden Centre revolves around helping customers find the right plants – all while raising funds for Ukraine. 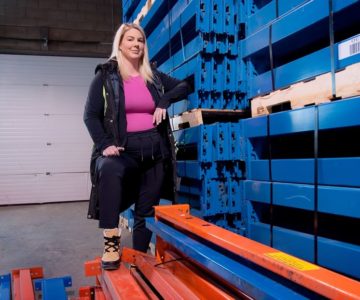