MISSION: Supporting small to midsize natural and organic farms, artisanal and fair trade producers by offering fair compensation and by providing a larger market presence and increased accessibility by consumers to this group and their products.

On the shelf behind where I sit, I spy a selection of books that includes The 100-Mile Diet, Slow Food Nation, Ecoholic – just the titles you’d expect in a food store that includes the term “100 mile” in its name.

Jackie Durnford and Sandra Lackie have opened a shop on Creemore’s Mill Street that has villagers and residents of the surrounding countryside enthusiastically atwitter. They have invited me into the Creemore 100 Mile Store, an enterprise that has been eating up most of their time since long before their September grand opening. Jackie sits behind the “cash register” – a laptop computer – on a stool fashioned from an old tractor seat.

One leg crossed, with short dark hair and equally dark eyes, Jackie exudes professionalism. In clipped sentences she describes how the business idea grew after they organized a 100-mile dinner in Creemore in 2007 and were then inspired by a visit to The 100-Mile Market in Meaford.

Sandra stands across the counter from us, one eye on the door ready to explain to anyone who comes along that, it being Thanksgiving Sunday and all, the store is closed. But when one of the store’s favoured suppliers, Jonathan Forbes from Forbes Wild Foods, peers in the window, Sandra can’t help but let him in to pick up a few last minute items for Thanksgiving dinner. 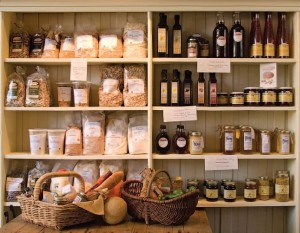 Shelves are chock full of jams, grains, breads and much more produced within 100 miles of Creemore. Photo by MK Lynde.

Proudly, she shows me a few of Forbes’ products that the store sells: maple syrup, juniper berries and wild mustard. Forbes has other products, but because their main ingredients don’t grow within 100 miles of Creemore, they aren’t on Jackie’s and Sandra’s shelves.

Sandra, who is more accustomed to the volunteer world of the not-for-profit sector, can’t quite believe she’s involved in a business that could well become profitable. “I’ve always worked for somebody,” she explains. “Opening my own business has been empowering.”

Clad in a T-shirt and long denim skirt, Sandra is distracted from our conversation by a young man who knocks on the door. She explains about being closed, but when he asks what the store charges for a Highland cattle beef steak, she invites him in and shows him what she has in the cooler. Then she offers him some cooking instructions before ushering him out the door and returning to our interview.

In their forties, Sandra and Jackie aren’t starry-eyed youngsters infatuated with a fun but flawed new love. This pair has come up with an impressive local business model. They created the 100 Mile Syndicate to augment the $2,500 they each invested. On offer are a maximum of fifty shares, each worth $1,000. To kick things off, they threw a Prospectus Party a few short months ago in July. They invited forty women – only women can buy shares – to what was supposed to be a glorious evening of food, drinks and information about the share offering, under a southern Ontario star-studded sky. The guests were served “Farmtinis,” a concoction consisting of local apple cider, local cranberry juice and maple vodka, as they, in fact, huddled under a tent to escape pelting rain and rumbling thunder.

But the heavens weren’t the only thing moving and shaking that evening, the women stormed too. When the evening was done, the 100 Mile Syndicate had its first seventeen investors, including their inspirational mentors from The 100-Mile Market in Meaford. Each investor signed a cheque that amounted to a five-year loan for which they would receive a seven per cent annual return.

Two months later, Jackie and Sandra watched proudly from the step of their newly opened store as Donny Metheral, a local expert, sheared a sheep, as a substitute for the traditional ribbon cutting. This sort of twist, one that brings a smile to your face, infuses most of what goes on in the Creemore 100 Mile Store – a business that won’t “fleece” you, according to one customer.

At about 560 square feet, the pint-sized shop is chock full of the best food Creemore and area has to offer. Artisanal cheeses fly off the shelves, as does the 100-per-cent grass-fed Highland cattle beef, the Berkshire pork, the apple sausage and elk pepperettes. Moreover, Jackie and Sandra have been amazed at how difficult it is to keep Harmony Dairy milk – sold in old-fashioned glass bottles – on hand. After only six weeks they’ve already outgrown their space, have plans to relocate down the street, and are reworking their business plan to catch up.

“To be sold in the store, a product has to be grown or raised within 100 miles of Creemore,” Jackie explains when I ask her why they don’t sell chocolate or coffee. While a few short years ago this restriction would have resulted in a lacklustre, if not a bare, pantry, that’s no longer the case. “We expected to have twenty suppliers by Christmas,” says Jackie. “We already have over forty.” 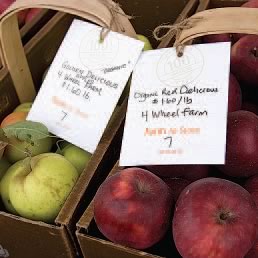 Fruits, vegetables, herbs, cheese, eggs, grains, meat, fish, bread, oils and preserves normally overflow from shelves and tables. But on this holiday Sunday, the place has been mostly cleaned out by customers who have bought into the “local is better” idea. Sandra can’t locate a single remaining example of what has to be their most unusual item: hardy kiwis that are grown near Barrie.

Thom Paterson, a food enthusiast and area councillor, is delighted with the place. He tells me, “Some people say that buying local, buying organic is expensive, but you have to think about what it is you get.” He adds, “I think it’s what you get free in the bag.” By this Thom means a sense of community. He is able to walk to the Creemore 100 Mile Store, knows the people who sell him his food, and often even knows the people who grew it.

Robin Vaile, a shareholder and enthusiastic customer, spends weekends near Creemore. “I am thoroughly knocked out by their business acumen,” she enthuses. “We actually buy food in the Creemore 100 Mile Store and take it back to Toronto.”

Isn’t that the way it should be?