When it opened in 1867, Peel County’s new jail was seen as a sturdy symbol of justice. A century later it was called a barbaric dungeon. Today, it is part of an award-winning heritage complex.

For a building destined to have a long and prominent history, the Peel County Jail did not begin well. By its completion in 1867, it had come in late and 93 per cent over budget. One of the first motions passed by the council of the brand new county was to ask the province for a special grant to cover the gap.

For the councillors, building a jail was not a matter of choice. To be an independent county in Ontario, a jail and courthouse were prerequisites. Peel’s pricey facility not only filled the bill, but even attracted admiring comments, such as the observation of an English tourist who called it “a handsome pile.”

Not “handsome” to those inside

The tourist’s description must have triggered a sardonic comment or two from the wrong side of the bars. Like most nineteenth-century jails in Ontario, the design of Peel’s unhallowed halls was modelled on that of England’s fortress-like Newgate Prison. 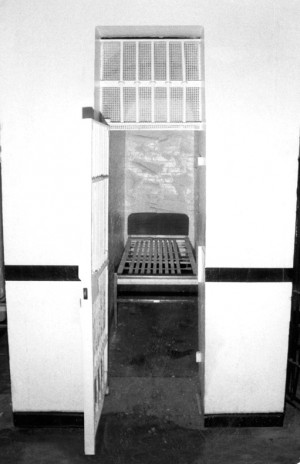 The jail’s mandate was punishment, pure and simple. Cells were tiny. The narrow metal cots had skinny straw mattresses. Lighting was inadequate, the heating even more so, and well into the twentieth century, the nighttime toilet facility was a pail. Prisoners cleaned their own cells and killed the vermin (lice, centipedes and the like).

There was little or no recreational activity and no skills training. Exercise was usually limited to thirty minutes to an hour a day in the yard, although prisoners could be put to work at gardening and repairs – complete with ball and chain if that was deemed necessary.

Peel’s jail, however, boasted a perk that not all facilities could claim: a family-sized apartment for its “governor.” This, in addition to a reasonable income (in 1962, the starting salary was $5,500, somewhat above the average start for Ontario teachers at the time), meant the position was easy to fill.

As in all jails, the governor’s rule was absolute. He was responsible for privileges, visiting rights, food quality (and quantity), discipline, even for administering sentences, such as strapping, which was still applied a century after the Peel jail was built. Fortunately for the inmates, Peel’s governors seem to have been an enlightened lot.

According to May Greig, for example, an assistant matron from 1950 to 1971, Governor Joe Mitchell refused to strap prisoners on the back, avowing that applying the leather to the buttocks was enough. Mitchell was also known for administering fewer swings than the judge had specified, although he still believed in the power of deterrence. One reason younger prisoners were housed in a common area was so that a strapping could be heard clearly by everyone nearby.

The urge to be free

Joe Mitchell was not alone in his management style. One of his predecessors, William Partridge, was noted for serving inmates a Christmas dinner that, as the Brampton Conservator put it, “would match the excellence of any hotel repast in the province.” This generosity might account for the significant number of transients who tried to get into Brampton’s jail for brief stays, especially in winter, and especially during the 1930s. Still, their numbers were well matched over the years by inmates wanting to go the other way.

Among the more daring of the latter was one A. Preston, who made a ramp of a bench and table to get over the wall in broad daylight and then upped the chutzpah factor by walking right past Sheriff Broddy’s house. Preston was never seen again. Nor were the two prisoners in 1906 who pulled the jail’s pump out of the well and used its long draw pipe to defeat the wall. During this particular escape, two other prisoners watched the proceedings, but declined to participate in the belief that their obedience would help prove their innocence at their burglary trial. (It didn’t.)

The escape in 1932 of yet another inmate, E.C. Morrow, was surprising because he had only two days left in his sentence. However, he had done time in Owen Sound before being transported to Peel and, on release from Peel, was due to serve another sentence in Barrie. Unlike some of his predecessors, Morrow was recaptured, perhaps because in an inspired moment on his way out, he had grabbed a suit of gaudy street clothes off a rack, making it easier for his pursuers to identify him.

As the Peel jail aged, the number of attempted breakouts increased, although the strategies generally did not reflect well on the planning skills of the would-be escapees. A case in point: In 1950, inmates Morissette and Everson could be heard up and down the corridors busily sawing the bars of their cell with hacksaw blades in the middle of the afternoon.

Still, the Attorney-General’s office was sufficiently impressed by the sheer volume of activity to hold an inquiry. Among other ideas, it came up with a recommendation to cover the jail-yard wall with smooth plaster to make it harder to climb. Ironically, no escapee had ever successfully scaled that wall until after the recommendation was implemented.

Worse than jails in Cuba!

The province took control of all county jails in 1968. That same year, the Peel County Jail was officially condemned, a sanction pronounced annually thereafter until the facility was finally closed in 1977. That year, one of its final and more famous inmates (for five days), Black Panther leader Huey Newton, described the place as worse than the jails in Cuba.

It was not an unjustified comparison. The cells, albeit with lighting now, still measured about four feet by seven feet as in 1867. The straw mattresses were now foam rubber (several of which a prisoner managed to set afire in 1976, resulting in a total evacuation). The jail was understaffed and overcrowded and, despite the well-established philosophy of “correction” in prisons by this time, the nature of the building meant that operations continued pretty much as they had in 1867.

Although the end of its service as a jail was too long in coming, the rebirth of the old building as a heritage complex was dramatic. In 1986, nine years after the last cell door had clanged shut, the Peel County Jail opened to enthusiastic public acclaim as a museum, art gallery and archives, now known as the Peel Heritage Complex. The enthusiasm was reinforced by a premier award of excellence for contemporary architecture – chosen from among twenty-nine entries. By both preserving history  and blending it with modern purpose and function, the building is now a site of distinction in the Region of Peel.

It took 120 years to get there, but at long last the old Peel County Jail truly deserves to be called a “handsome pile.”

WHO WENT TO JAIL?

In its final decades, Peel County Jail generally housed prisoners serving short sentences (weeks or months) and others awaiting trial or transfer, but in the beginning the facility was pretty much full service. Early records tell of a highwayman serving nine years for robbing a stagecoach, of a cow thief serving nine months, and of a 16-year-old girl awaiting trial for infanticide (she was acquitted). Statistics for 1868 show the jail housed sixty prisoners that year, all but five were citizens of Peel. Among the prisoners were twenty-five farmers, six blacksmiths, a tailor, a baker, a whip-maker, a gentleman – and five wives.

Only half the prisoners in 1868 were literate, and only seven of the sixty were female. The most frequent sentence that year was “aiding and abetting manslaughter” (13), followed by “assault” (7) and “drunk and disorderly” (6). There was one murder that year, one manslaughter, one “suspected of being a member of an illegal society,” and one “obtaining lumber under false pretences.” Ironically, one-third (20) of the 1868 inmates were from Albion Township, the jurisdiction that had fought hardest against the creation of Peel County, and the expense of building a jail.

A solitary confinement cell was still in use in 1968. A prisoner named Hodge, then 18, reported spending 30 days there in a cell with a steel mesh bed, no lighting, and with curved ceilings that allowed him to stand erect in only one spot. He was fed twice daily (cold bean cake and tea) and had to request drinking water. His toilet, a white potty, was emptied once a day. According to his written account, when he objected to his treatment during a court hearing the Crown argued successfully that no judge should interfere with jail authorities doing their job. Arraigned for car theft, Hodge spent a total of three months in Peel County Jail. The charge was dismissed.

Next year, the old Peel County Jail will be reborn yet again as part of the dramatically renovated and expanded Peel Heritage Complex. Construction on the $10-million project begins this month. When the complex reopens in the fall of 2011, it will include a spacious new art gallery, meeting and event venues in the historic Peel County Court House (1867), new community performance and studio space, as well as additional storage for the archives. During the construction, access to the Peel archives will be limited. However, in the renovated complex, the archives will continue to occupy the jail as they have since 1986. And, as they are now, some of the original old cells will remain preserved for the amazement of visitors.

Updates on the progress of the renovation, including information on interim access to services, is available at http://www.peelregion.ca/heritage/.