Roundabouts have long been a feature of European roads – and a source of bewilderment verging on terror for many Canadian travellers who cross the Atlantic and dare to get behind the wheel of a car.

Our collective inexperience with roundabouts was best captured in the 1985 film European Vacation, starring Chevy Chase as Clark Griswold. After landing in England, Clark and his family rent a car to drive to their hotel. Along the way, they are caught in the Lambeth Bridge roundabout in downtown London. Unable to merge to exit, Clark drives around the circle for hours, each time happily proclaiming, “Look kids, Big Ben! Parliament!” Eventually day turns to night and his wife and kids fall asleep, leaving a confounded Clark to decipher the roundabout on his own.

But that joke may soon grow old on this continent, as more and more roundabouts replace traffic signals and stop signs at our intersections.

As the calendar flipped from 1999 to 2000, there were only about a hundred roundabouts across North America, but the past decade has seen a slow but steady transportation transformation.

Engineers have turned to roundabouts to help solve growing traffic congestion and air quality concerns. In Canada, roundabouts now number in the hundreds.

The Region of Peel joined that movement last November when it officially unveiled its first roundabout at the intersection of Dixie Road and Olde Base Line in Caledon. Since then, according to Joe Avsec, manager of traffic engineering, drivers have expressed “a lot of positive feedback.”

And more are already in the works. The intersection of Mayfield Road and Pillsworth Drive is getting one, and roundabouts are set to become an integral part of the new, estimated $50-million Bolton arterial bypass project on King Street at Coleraine Drive and Highway 50.

Love them or loathe them, roundabouts are here to stay.

The plan for the region’s first roundabout goes back to 2006 when staff decided to correct the “jog” in the offset intersection. Construction began in 2010 and the entire project cost about $2.3 million, including the $400,000 roundabout, as well as the realignment and reconstruction of Dixie Road from south of Boston Mills Road to Olde Base Line. 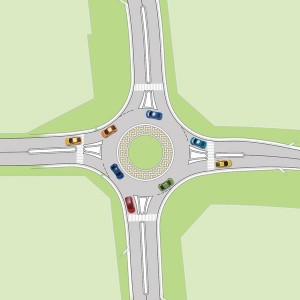 It would have cost about $250,000 to construct a conventional four-way intersection at the site, with another $150,000 anticipated for installing traffic lights in a few years, so planners expect the roundabout will save the region money in the long run. They note the savings in hydro and maintaining traffic signals represents savings of approximately $6,000 per year.

Also, because the entrance to a roundabout is curved (referred to as deflection), drivers instinctively slow down while entering. “Motorists will reduce to an internal operating speed of 30 or 35 kilometres per hour,” said Sean Ballaro, supervisor of traffic operations.

“When you build a roundabout, in essence what you get are rear-enders and side-swipes, which are not the types of collisions that typically kill people,” said Ballaro.

From Vancouver to Halifax, roundabouts have sprung up across the nation. In neighboring Halton Region, the first roundabout opened in late 2010, and Waterloo Region has been building them since 2004.

Peel has been relatively late to introduce roundabouts, and there is growing evidence that slow and thoughtful implementation is prudent.

Waterloo has been one of the most aggressive jurisdictions in the country to adopt the roundabout. Since 2004, when Waterloo built its first four, their numbers have quadrupled to 16, and there are at least 30 more in the planning stage. But the municipality has come under fire in recent years for rolling them out too quickly and in poorly chosen locations.

In the past two years alone, the number of collisions in Waterloo’s roundabouts has risen nearly 54 per cent – from 85 in 2009 to 131 in 2010 – an indication that the learning curve has been steeper than anticipated.

Although the majority of the Waterloo collisions were of the fender-bender and side-swipe variety with no serious injuries – precisely the types of collisions traffic engineers expected – the fact remains that collisions at roundabouts continue to rise despite their presence in the region for nearly a decade.

In response, Waterloo tripled their roundabout education budget to $150,000 in 2011, introducing a program called “Practice Makes Perfect.” It included various print and radio ads, as well as a series of television spots featuring the Ontario Hockey League’s Kitchener Rangers.

“I challenge anyone to find a more comprehensive education plan than what we have,” said Bob Henderson, Waterloo’s manager of transportation engineering.

In Peel, the approach to education is so far more muted. Staff conducted what they call a “grassroots educational campaign” that consisted of distributing brochures and other materials to residents at a cost of about $4,500.

“We found generally that any issues anyone had were just fear of the unknown,” said Imre Tot, the region’s technical analyst of traffic operations. “[The public] didn’t really understand how roundabouts would work, but they’re excited about it, and the message we got was that it’s about time.”

Road signs associated with roundabouts, from left to right : Roundabout ahead, begin to slow. Prepare to merge, yield to vehicles in the roundabout. Proceed in the direction indicated. Be aware of which exit you will be taking.

The early results in Peel have been encouraging. There has been only one reported collision at the intersection so far, and that was while it was under construction. “It is a more rural location and it is a one-lane roundabout, which was what we were looking for to kick off,” said Avsec.

According to a traffic analysis at Dixie and Olde Base Line, only a little more than 3,000 vehicles moved through the intersection in total over three daily peak times, and about 96 per cent of all traffic was cars. The intersection also had a sparse collision history – only 12 were reported between 2006 and 2010, less than 0.2 per cent of the 6,102 collisions that occurred in the entire region in 2010 alone.

Still, if Waterloo is an example, the number of fender-benders is almost certain to rise once roundabouts begin to appear at intersections with higher traffic volumes.

Staff recognize the challenges ahead, and admit this roundabout is a test to see how they might potentially roll out across the rest of the region. Still, they are optimistic that given a little time and experience, the public will adjust without too many problems.

“Like I tell my mother, they are no different than road signs. It’s just a standard yield situation,” said Tot. “Just drive slowly, proceed with caution, and the roundabout will help you get through it.”

What do you think about Roundabouts?

How to use a Roundabout

Check out this interactive, animated demonstration on using a roundabout:

A brief history of roundabouts

While the roundabout is new to the region, circular traffic control measures have been around for centuries, predating the invention of the automobile by more than a hundred years.

One of the first was the Bath Circus (circus is Latin for “ring” or “circle”), located in Somerset, England, a circular section of road surrounded by townhouses completed in 1768. The first true roundabout, referred to as a traffic circle or rotary, was built around the Arc de Triomphe in France in 1901, and the first known traffic circle in North America was the Columbus Circle in New York City, completed in 1904.

Traffic circles are much different from their modern counterpart. They’re typically larger than roundabouts (90 to 120 metres in diameter compared to 20 to 40 metres now), allowing vehicles to operate at higher speeds. Priority was also given to traffic entering the roundabout, instead of traffic already inside.

Operational problems and safety concerns with traffic circles led to their gradual disappearance from North American roads during the 1950s, though they continued to be used extensively in Europe. France has the most roundabouts and traffic circles in the world – about 30,000 – while the UK has about 25,000.

During the 1960s and ’70s, changes to the design and function of traffic circles helped spark renewed interest in their use around the world.

Those changes were simple, but important. Traffic still moves in one direction around a central island, but modern roundabouts give priority to the vehicles already inside the circle, allowing traffic to flow much more smoothly and reducing the number of collisions.

In 1999, there were only about a hundred roundabouts across Canada and the U.S. In 2007, the Ontario Ministry of Transportation established its first Roundabout Implementation Team to research and promote roundabouts as an alternative form of traffic control on provincial highways.

By 2010, the Canadian Institute of Transport Engineers reported there were 146 roundabouts in Canada – with BC and Ontario leading the way with 44 and 39 respectively – and an estimated 2,300 in the U.S.

Still, there has yet to be a roundabout built in Canada as complex as the so-called “Magic Roundabout” in Swindon, England. Built in 1972, it consists of five mini-roundabouts arranged in a circle around a large central one.

About the Author More by James Jackson

James Jackson is a freelance writer who grew up on a farm in Caledon.
Add a Comment

And they're better for the environment!