It’s Saturday afternoon at the Erin Fall Fair. Thanksgiving weekend. I’ve treated myself to hot French fries, the potato skin bubbled and crisp. I sprinkle on salt and malt vinegar as greasy Rorschach spots spread on the conical cardboard container.

My favourite fair food in hand, I find a seat on the crowded bleachers overlooking the main ring where a dozen teams of grey or black percherons and copper-toned Belgians seem to feel the crowd’s energy. They’re anxious to pull an ever-heavier “boat” loaded with concrete slabs over a 15-foot distance to prove they are the best team in their class.

I spy King and Thumper. The chocolate and sorrel Belgian pair prance with a fleetness of hoof that’s unexpected in such enormous animals. Between the two, they weigh almost 3,400 pounds. To look Thumper, the taller of the two, in the eye, I would have to sit on his owner Scott McLean’s shoulders. Yet, these mammoths are giddy like schoolgirls before a dance competition. They can’t wait for the show to begin. 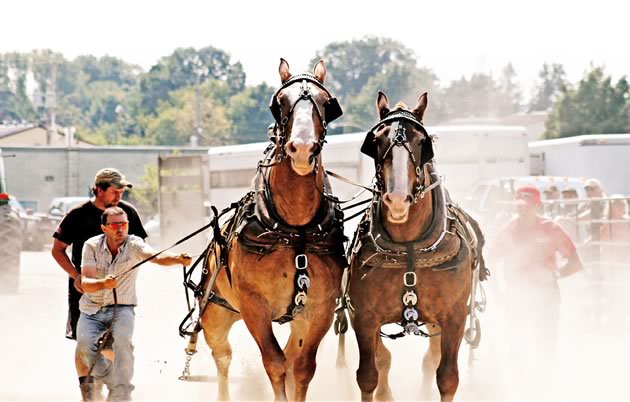 Scott McLean holds the traces as Thumper and King pour their hearts into the task of pulling a “boat” loaded with up to 10,000 pounds of concrete slabs at recent agricultural fair competitions. Scott and his team participate in as many as 30 competitions over the course of the summer and fall. Photo by Lisa Binns.

Heavy horse pulls are crowd pleasers at Ontario’s fall fairs. Erin Fall Fair secretary Eileen Brown says they attract so many spectators they’re given the prime Saturday afternoon timeslot. Most of the other local fairs in these hills also offer audiences a chance to enjoy this nod to the olden days when horses pulled farm ploughs and hauled trees out of the bush.

A horse pull is a chance for these mighty beasts to strut their stuff. And lest you think it’s a pastime for geezers, the majority of the “teamsters” who drive these horses are in their 40s, though a few are indeed in their 70s and 80s. Scott McLean began as a relative youngster. Now 39, he has been pulling for 15 years. “There are more people pulling now than when I began,” he says.

McLean has a day job, but competes in as many as 30 horse pulls during the season, which runs from early summer until Thanksgiving. “Sometimes I’ll do four pulls in a weekend,” says the Erin native.

The rules governing horse pulls vary from place to place, but in Ontario they involve having either lightweight (3,400 pounds and under) or heavyweight (over 3,400 pounds) two-horse teams take turns pulling a skid, called a “boat.” It carries an increasingly heavier load of concrete blocks starting at about 3,500 pounds and going up to around 10,000 pounds for the lightweights, and 12,000 or more for the big guys. In other words, these horses pull three times their combined weight, sometimes more.

If a team fails to pull their load for 15 feet on their first attempt, they get a second chance to cross the line. If they can’t make the distance in two attempts, they’re eliminated. The team that takes home the red ribbon, a few hundred bucks in prize money and braggin’ rights is the one that drags the most weight for 15 feet (or, in the event of a tie, the team that pulls the heaviest weight the farthest).

Harness used for draft horses can be ornate, but it’s mainly functional. A padded leather collar goes around the horse’s neck protecting it from the pair of hames (wooden or metal shaped bars) that rest on the collar and run vertically down the sides of the horse’s neck. Attached to the end of each hame is a thick leather strap called a trace. These long traces pass along either side of the horse at about a 45-degree angle from just above and in front of the horse’s shoulder, to the ends of a tree – a metre-long wooden or metal bar behind the horse. Configured this way, the horses actually push against the collar to pull the load that is attached to the hames via the traces.

And pull they do, which is what makes these competitions my favourite spectator sport. That and the fact they involve a level of teamwork that would make Wayne Gretzky smile. With no encouragement except the teamster’s voice, the horses pour their hearts into their task. It’s impossible for spectators not to cheer them on as they dig their plate-sized front hooves into the turf, sometimes getting down on their knees as the muscles in their massive hind ends quiver with effort.

The trick to a team’s success, according to Bill Pendleton, a champion teamster until his hips gave out a few years ago, is that they must hit the load at the same time and pull together. “When it gets up to 8 or 9 or 10 or 12,000 pounds, if they don’t start together, they don’t stand a chance,” Pendleton explains.

And therein lies the skill of the teamsters who know their horses. People can spend $40,000 to buy the best team and still not beat McLean’s well-trained Belgians for which he paid a fraction of that amount.

Adding to the excitement is the all-important “hook,” wherein a “hooker” must slip a big hook into a fitting on the boat to attach the team to their load. To set up for the hook, the teamster lines his horses up in front of the boat and accomplishes his task with split-second timing as a few thousand pounds of horseflesh are raring to go. Pendleton holds up his hand for me. Minus the end of one finger, he says, “I sprayed the judges with blood when I did this, hooking for a friend.”

At his farm on Erin’s Sixth Line, McLean passes me the lines for King and Thumper as they haul us along on a 1,200-pound sled around a small muddy track in front of his barn. I tell him I want to feel what it’s like when the horses really pull.

Before I have time to properly brace myself, McLean whistles. We’re instantly airborne. As I pull on the lines to keep myself from being flipped off the back of the sled, I have a hint of the true meaning of horsepower. I also realize that eating crisp hot French fries and cheering on King and Thumper from the sidelines is the better spot for me on an October Saturday afternoon at the Erin Fall Fair.

Pulling Their Weight from Mick Partlett

Pulling Their Weight from Mick Partlett on Vimeo.