A Week Without Screens

Over the week we got into some serious battles in the mornings, pushing the time envelope until everyone had to rush off to work and school.

Have you ever threatened something only to want to swallow back your words once they had escaped? It happened to me a few weeks ago with my son Adrian – “If you mouth off like that once more, all screens are off for the week!”

“I don’t care – do whatever you want!” he spat in my direction.

The screens went black. I was filled with an uncertain dread about what I’d promised and now had to enact.

In our house there are a lot of screens. I have a personal phone and a work phone, both fully hopped up with all forms of voice mail, text, email, BBM, social media and Internet. I can work and socialize around the clock with these by my side. There is a big-screen TV and a medium-screen TV. There are a number of laptops and various other smart things. Adrian does not have a phone yet, but he does have his own iPod and Nintendo, and can run all the systems better than I can. He’s lobbying for a smartphone for his tenth birthday.

The way we work and live now, screens are on. For many of us, there is very little, other than a prolonged power outage, that turns them off. We ensure we have backups to our backups to keep life running. During the big ice storm last winter, what was the most requested “comfort” in the town where I work? A place to recharge gadgets.

Kids are calmed with screens from a young age now – on car trips, while dinner is being made, after dinner, before bedtime. Active Healthy Kids Canada reported a few years ago that Canadian children and youth engage in a whopping average of 7 hours and 48 minutes of screen time per day.

So what happens when you take the screen away from the child? I was about to find out.

At first there was some dramatic flopping around. I could hear extended sighs, projected for my benefit. Long periods of silence were punctuated by physical shifts on the couch resulting in slithery poses with skinny legs and arms splayed in all directions. Starfish! Octopus! Eel! More sighs. The twitchy inactivity went on for what felt like hours. What had I done? Dread rested at the top of my throat.

Then I heard some tinkering in the bowl that holds dominoes. Adrian set up a course in the front window that was quite dramatic and resulted in the final domino falling back into the bowl. Next came Mastermind, then Battleship. I love these games! Over the week we got into some serious battles in the mornings, pushing the time envelope until everyone had to rush off to work and school. The puppy cocked her head to one side as we laughed at the patterns and “strategies” (read “cheats”). She took to stealing Mastermind pegs and dominoes. I found a few under my pillow. 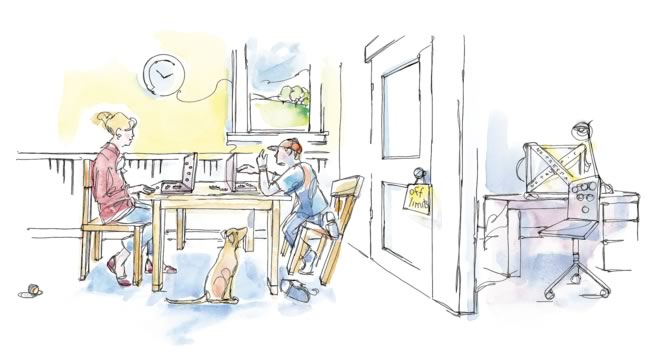 Next came Mastermind, then Battleship. I love these games! Illustration by Shelagh Armstrong.

There were a few bored moments, with more couch posing. But there were also pillow fights and wrestling matches in the basement. He made a call to his grandparents that lasted more than a minute. He drew and planned and made crafty things. I was pleasantly surprised at how quickly he had stepped away. The funny thing was, he didn’t ask for any screens back. Adrian is definitely an active kid, in various organized sports, a bike and scooter rider, but he also loves video games, movies and YouTube.

In Canada, over 30 per cent of children and youth are considered overweight or obese, according to the Childhood Obesity Foundation. Even outside the “no screens” edict, I try to find a balance of active play and screen play. That week, he played ball and rode his bike and goofed around with the dog as he usually does, but it was the in-between times that were different for him, that involved being more creative, interactive and … bored.

The difference for me was a lot more mental work. In the car, I usually listen to the news or maybe make lists in my head, or sort out problems while Adrian plays a game on his iPod. Instead, his ideas free-flowed. We discussed various bullies, war, traffic, best movies. He talked, talked, talked. We had several dance parties (which basically involve turning up the radio really loud). I had to be “on” for him much more than usual.

I do love how creative Adrian is on the computer, what he can build virtually in Minecraft, and how adept he is at using technology. Is technology an evil? No, it’s a reality – a part of our lives. We need to love it, use it, and then be able to set it aside to go outside, to move and play and interact with the world. After the initial electronic drought, he was lapping up old-fashioned games and social activities. I thought about previous generations’ calls to “Go outside and don’t come back until dinner!”

The dreaded week without screens? It was a huge success, and I am considering doling out this punishment again very soon.

Winter’s short days and long nights can be challenging when it comes to keeping our families active and engaged. Here are a few of our special picks for the season that will warm your heart and get you out and about. Enjoy!

In the spirit of giving…

Many of us spend much time giving to others within our families and communities at this time of the year. Here is a way to get your little ones involved. Operation Christmas Child is accepting shoeboxes packed with hygiene items, toys, and school supplies for needy children worldwide. Drop-off takes place at Covenant Alliance Church, 3 Zina St. in Orangeville on November 21, 3 to 7 p.m. and November 22, 9 a.m. to noon. 519-940-9479; samaritanspurse.ca

If you haven’t been to the Tractor Parade of Lights in Orangeville, it’s a real local gem. Boys and girls just love seeing the big machines trundling through downtown, all bedecked in hundreds of lights. Grab blankets and a thermos, or buy some hot chocolate or cider on the go – it’s a great night!

The parade starts at 6 p.m. on Friday, November 21 and travels south on First St. from Hansen Blvd. before making its way along Broadway. Orangeville’s more traditional Santa Claus parade takes place earlier on Saturday, November 15, beginning at 5 p.m. and travelling the same route.

Light up my life

Christmas in the Park in Orangeville is a wonderful tradition that you must see! Families come year after year to “ooh” and “ahh” at over 50,000 bulbs, unique displays, Santa visits, carolling, readings, ice sculptures in the heart of the town – all free. The display of lights would make the Griswolds wish they lived in Kay Cee Gardens! December 5 is the kick-off night from 7 to 10 p.m. and the display is open nightly from December 6 to January 2 from 5:30 to 10 p.m. Kay Cee Gardens is nestled between Bythia and John streets in Orangeville. orangevilleoptimists.ca

And from our furry friends…

All the best for a wonderful and safe season, from Kids in the Hills! — Bethany