A Breath of Fresh Air

This Mulmur house was designed from the ground up with healthy living in mind. 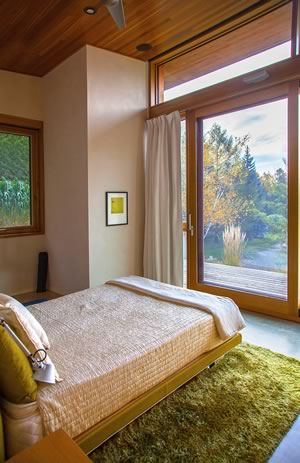 This bedroom overlooks the pond and fills with early morning light. Photo by Pam Purves.

A North American couple – she from Dallas, he from Toronto – both with a strong sense of home and place, have two feet firmly planted in Texas and two in Mulmur. This transnational strategy means the couple can easily keep up with both sides of the family and friends. They made Mulmur the centre of their search for property in Ontario principally because they already had roots there.

Like many others, this couple loves the escarpment, the clean air and abundant fresh water in the area. They appreciate the beauty and the surprising landscapes found down its narrow roads and trails.

The 11-acre property they chose has a storybook quality. The previous owners had created spectacular gardens. The land itself rolls and resolves in a large natural pond at the foot of a hill. It is a well-wooded spot, creating privacy around a large open area where the home and pond sit.

There was a house on the property, and the couple planned to live in it for a few months while they worked on plans for a new home. Early on, however, they discovered mould, which completely altered their approach.

She has been diagnosed with chemical and electromagnetic sensitivity. This condition threatens her immune system and has a serious impact on the quality of her life. Perfumes, car exhaust and modern glues and moulds, among other substances, can cause dizziness, headaches, fatigue and other worrisome symptoms. They tried to remediate the mould, but it didn’t work. So their strategy shifted and a completely new house became the plan.

Here was an opportunity to design a healthy home from the ground up. Needless to say, this was a challenge. Imagine having to think about the chemical exhaust from modern cabinetry and paint, about electromagnetics – the energy fields given off by everyday features such as metal roofs, steel rebar and Wi-Fi. Things most of us never think about had to be considered and analyzed, and new solutions developed.

The couple went to Andre D’Elia and Geoffrey Moote of Superkül, a Toronto architectural firm. The team there immediately understood and rose to the challenge. The next step was to find a builder willing to innovate, and they quickly settled on Wilson Project Management, a Toronto-based firm with an office in nearby Collingwood. Jeff Pepper was the project manager.

The couple had read and been impressed by a book called Prescriptions for a Healthy House by Paula Baker-Laporte and others, and they pressed it on the architects and builder. “Everybody got a copy,” joked the husband. As it turned out, everyone appreciated the book’s practical approach, and it helped guide them through the unfamiliar territory they were entering together.

While building materials were being selected, the couple camped at a Toronto hotel, and as the architects brought carts of samples to them, she conducted sniff tests to see how she would react. It was an unusual and very educational process. 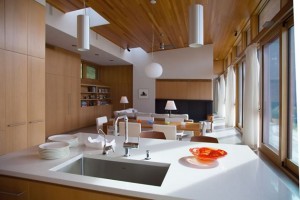 The 90-foot corridor of windows exposes the whole house to southern light and wonderful views. Photo by Pam Purves.

The learning curve was steep. The architects started out thinking the project was a wonderful opportunity to use some recycled materials. But while recycled materials may help the environment, they don’t necessarily support better health. Modern wooden cabinets, for instance, are often made of wood chips glued together – and the glue is laced with harmful chemicals that may leach out of the wood for years. A problem. But a problem with a solution. Off-gassing, the emission of harmful gases, could be limited by heat treating and sealing the cabinets.

Other products, though, had to be eliminated. The foundation materials were one example. The rear wall of the house nestles into the hillside and was to be built of reinforced concrete. But reinforced concrete must be poured into a plywood form, which is coated with a release agent so it will easily come away when the concrete dries.

The release agent includes a petrochemical – so that was the end of that idea.

Fortunately, they found a company called EcoInhabit in Meaford and Robert Steller, a Thornbury-based building biologist. He was familiar with Durisol insulated concrete forms, which look like cinder blocks but are made of recycled wood fibre mixed with Portland cement. Very strong, these forms produce no off-gases. They also resist fire, fungus and mould, and don’t attract vermin. And their ability to absorb and expel moisture makes them a natural humidity regulator.

Using the Durisol product also eliminated the need for strapping and a vapour barrier. The walls could simply be finished with coats of American clay, a clean product that looks like plaster, comes in various colours so painting is not required, and also helps regulate humidity.

To add strength to the blocks, rebar was required. But typical steel rebar can set up an electromagnetic field, as can steel roofs. Her electromagnetic sensitivity meant she could tolerate neither, so they substituted fibreglass rebar for steel and installed a green roof. 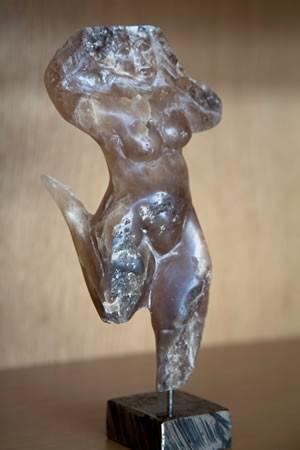 A sculpture by Pascal Cerchi from his 2012 Paris show. Photo by Pam Purves.

Although off-gassing had been minimized, it was still important to have lots of fresh air. In addition to a 90-foot wall of sliding glass doors that overlook the pond, the couple installed skylights to provide passive ventilation, bringing in lovely cool air from the woods.

The interior design of the two-bedroom, 2,150-square-foot home is elegantly simple, using a colour palette inspired by stone and wood. This combination, coupled with the long wall of open view, has resulted in a quietly exuberant space.

A project that was challenging but exciting for everyone has resulted in an environment that promotes health and was awarded a LEED Silver rating by the Canada Green Building Council. Though it has also won several other architectural awards, there is nothing precious about this project. The thought and care that went into the design and materials are subtly understated.

“We feel fantastic living in this house. Everyone comes in and feels comfortable with the space itself,” says the husband. “There is a feeling of softness due to light and fabrics. It’s an efficient house to use and easy to keep clean. You don’t get any cell phone signals here, so we’re unattached to cell. We use old-fashioned phones and our computers are connected by Ethernet cable, so the environment remains calm and peaceful.”

What is more important is how his wife feels. “I love how you feel like you are outside – doors open, skylights open, fresh air coming through the house and a confident feeling of well-being,” she says.

This home, a template for a way of building to minimize environmental impact and maximize health benefits, has proven a delight for all. 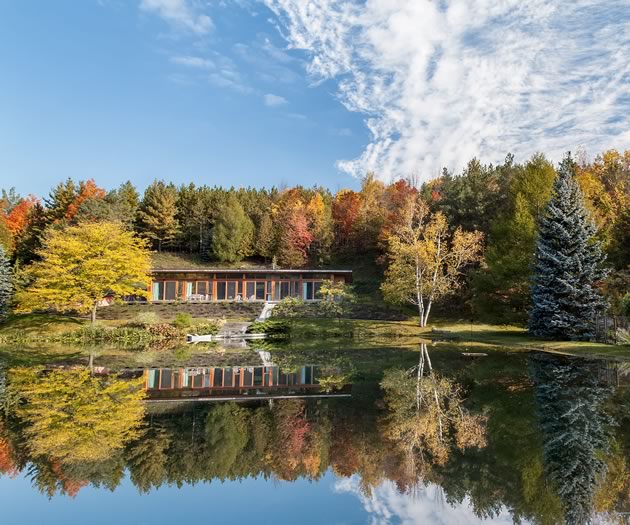 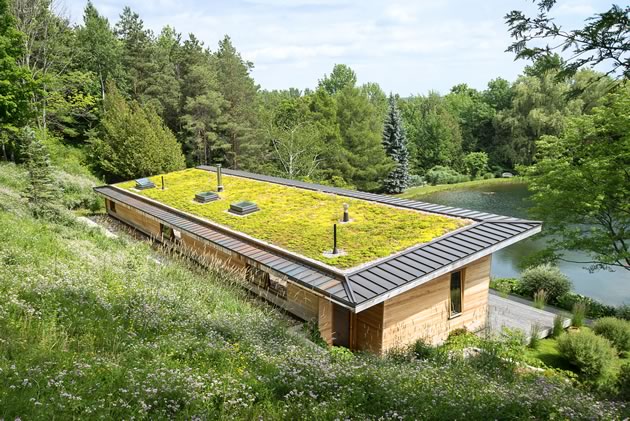 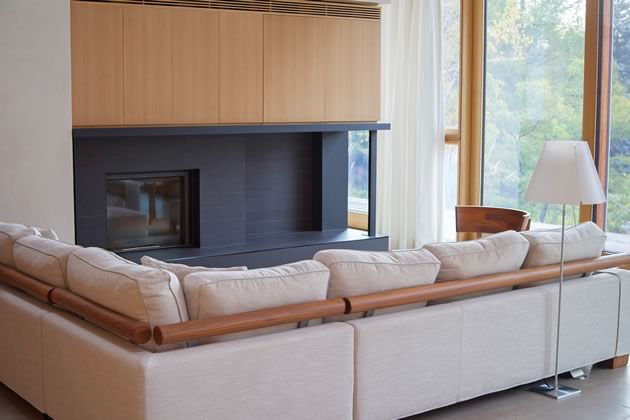 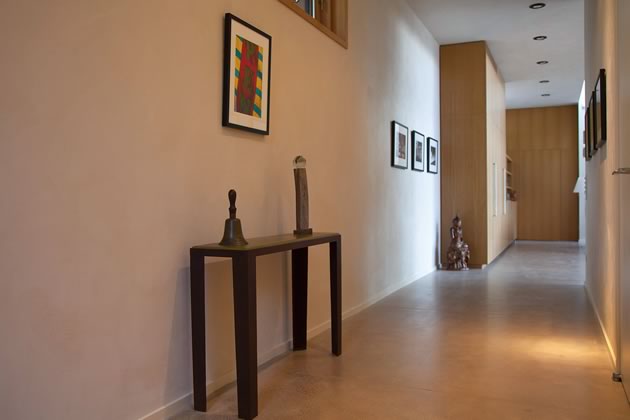 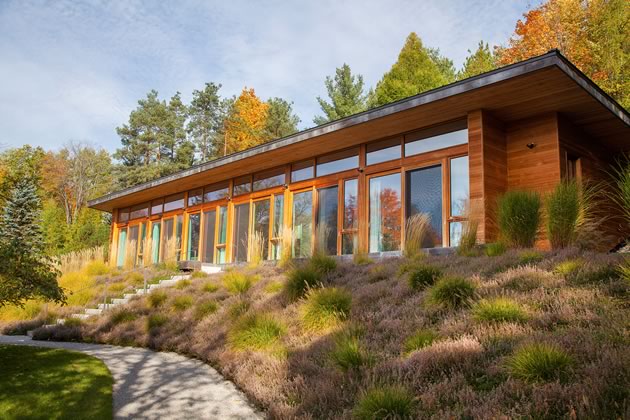 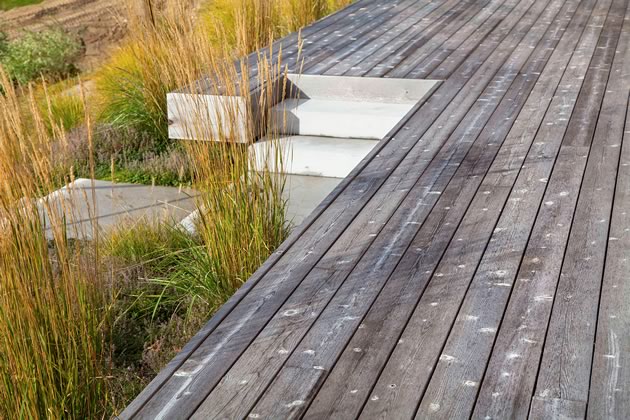 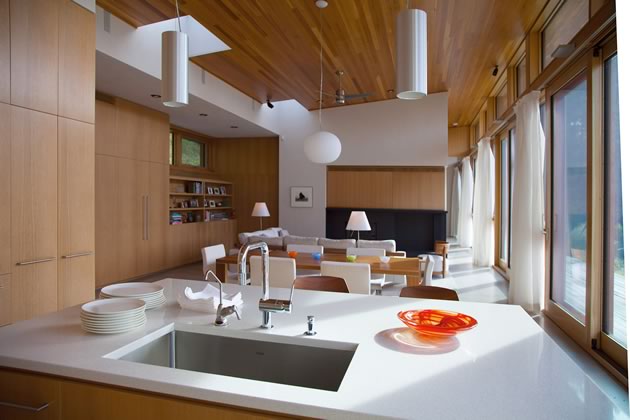 <
►
>
A green roof also helps settle the building into the landscape and contributes to a healthy indoor environment. Green roof and pond photos courtesy of owner.