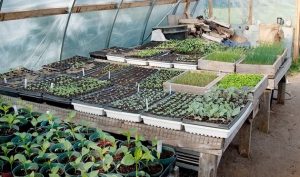 Seedlings for CSA produce are off to a great start in the greenhouse. Photo by Rosemary Hasner / Black Dog Creative Arts.

“Great Expectations.” Ten years ago, that was the headline on a story in this magazine about Whole Village, Caledon’s then brand new ecocommunity. And there is no doubt expectations were great.

Part of a global ecovillage network, Whole Village members’ common ambition for their 191-acre farm on Shaw’s Creek Road was as lofty as it was simple: to create a culture of living peacefully with one another and the planet. At the heart of this co-operative of up to 30 residents was one common denominator – sustainability, in every sense.

Cynics might say the concept was anything but sustainable. Indeed, several similar “intentional communities” from Hamilton to Orangeville have failed. But a decade later, Caledon’s Whole Village thrives. In that time it has made great strides toward its members’ key objectives: reducing their ecological footprint, living simply with shared resources, employing renewable energy and energy-saving building techniques, and stewarding their land by implementing principles of permaculture. They also run outreach programs to share their values and know-how with the outside world. Still, Whole Villagers themselves insist the key to their success, past and future, is a commitment to sustainability that reaches far beyond the environment alone.

“It’s a hell of a thing to try to recreate tribe or clan,” says Stephen Wilson, the Whole Village property manager. “You spend centuries developing individualism. Now trying to go back to the tribe, it’s a challenge, but it is a good feeling most of the time.” 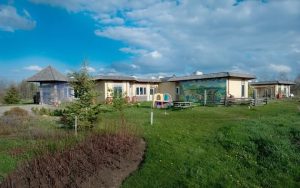 You can experience and learn more about Whole Village in many ways, from buying a share in their CSA to volunteering for a work bee or even becoming a farm intern. Photo by Rosemary Hasner / Black Dog Creative Arts.

In the late 1990s, zoning restrictions doomed Whole Village’s original vision, which included 30 self-contained co-housing units on a property in King Township. The project then moved west and morphed into an 11-unit, 15,000- square-foot single-family ecoresidence called Greenhaven. It boasts 6,500 square feet of common living, cooking and dining space. Ten of the suites have bedrooms, a sitting room, bathroom and kitchenette with no stove. The 11th, a six-bedroom family suite, does have its own stove. In addition to meeting Town of Caledon planning requirements, this one-big-happy-family design ended up being a much stronger fit with the values of the community.

While Greenhaven was in the planning and construction stages, community members lived in the heritage farmhouse on the property. This classic red brick house has been renovated and updated, and a number of residents continue to call it home.

Whole Villagers view community as basic to life, drawing parallels to an ecosystem in which a community of species lives in balanced relationships with one another. Longtime resident Brenda Dolling explains, “Whole Village tries to recreate that basic human community and to live in harmony with each other as well as the natural environment.”

Brenda emphasizes how spending time together eating (members try to have dinner together as many as five nights a week), socializing and working through problems and possibilities has been a big part of what has made this particular community work. And though individual residents, both renters and owners, have come and gone, Whole Village has accomplished a great deal as a community. 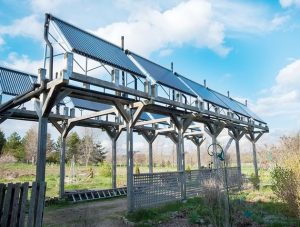 Greenhaven reflects a deep commitment to reducing their ecological footprint. The super-insulated building, for example, is heated by passive solar design and a highly efficient masonry heater fuelled by wood collected on the property, as well as a geothermal system. A new solar hot water array, known as an evacuated tube system, uses the sun’s energy to heat water for domestic use.

But residents aren’t entirely off the grid. They are, for example, online – with a website, a Facebook page and even a 12-episode YouTube video. On an ecovillage scale that ranges from rustic to luxurious, they claim the middle ground. “Our first goal is to be a sustainable community, which means working toward a self-sufficient ideal, but also working with the realities of Western life,” says Stephen.

Outdoors, Whole Villagers have worked hard to implement the principles of permaculture – an agricultural ecosystem that works with the natural forces of wind, sun, water and soil to attain self-sufficiency. Stephen says subsidized modern agriculture uses 10 calories of fossil fuel energy to produce one calorie of food. “For the first time in human history,” he says, “agriculture operates at a net loss of energy.”

Whole Village has been exploring ways to change this while ensuring the soil at the base of the food chain is clean and healthy. Their biodynamic garden, which amounted to half an acre in 2005, has grown to 10 acres planted in fruit, vegetables and nuts. It is cultivated largely by young farmers who pay rent to learn hands-on permaculture practices while running the Whole Village Community Supported Agriculture program. From June to October, CSA customers in the GTA buy shares in the farm’s harvest of diverse fruit and vegetables. The surplus is sold to local restaurants and farmers’ markets. 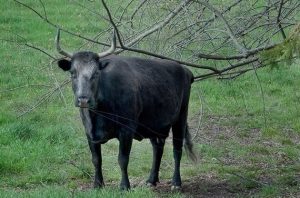 Elsewhere on the farm food production includes perennials, an apiary, maple syrup, a mixed orchard, an edible forest and poultry. Their mixed farming model also includes four Kerry cattle, a rare dairy breed that originated in Ireland. Every process is chemical-free and every possible bit of waste is reused, which may include feeding the previous night’s salad to the chickens or using extra building materials from Greenhaven to fox-proof the chicken coop.

With the help of local farmers, landscape designers, the Escarpment Biosphere Conservancy and Credit Valley Conservation, the community has brought permaculture values to the property’s living infrastructure as well. They’ve planted more than 20,000 native trees as windbreaks that enhance crop growth, heat traps to protect more delicate crops, wildlife corridors, and calm areas where people and livestock dwell. Woodlots and wetlands have been protected with buffer zones.

Wherever possible, human power replaces combustion-powered machines. “Most of us haven’t farmed before,” says Brenda. “Some things we do well, and some things, like our nut trees, are a work in progress.” The group agrees. Their efforts aren’t examples of perfected farming practices. They’re an object lesson in the astounding things people can accomplish when they work together to reconnect to the land.

Community members have found ways to spread these permaculture values beyond the property lines through internships, tours, workshops, conferences, cultural and orientation events for potential new members. “We teach a permaculture design course once a year,” says resident and professional videographer Jon Gagnon. “I’m still in touch with people who took the course three or four years ago, and I’ve seen the projects that are starting to spread throughout Ontario.” 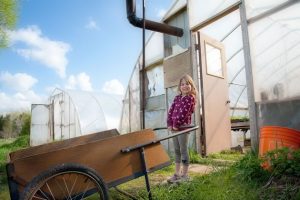 Five year-old Mila Sunshine Dickie, who was born at Whole Village, is ready to help in the greenhouse. Photo by Rosemary Hasner / Black Dog Creative Arts.

Still, Whole Village’s greatest success in permaculture, in sustainability, may be within the community itself. Village elder Barbara Wallace has lived “in community” with various groups since the 1970s. She says 99 per cent of ecovillages have difficulty at the stage where they must trust each other and put money on the table, find land and get along. That’s when most disappear.

What makes Whole Village an exception? How does this diverse group – young singles, couples, families with children, senior – who’ve been drawn together only by their shared values live harmoniously, like a big family?

“Striking this balance is a constant and conscious work in progress,” says Brenda. “We work very hard to be civil, to cultivate emotional maturity and to work together like good neighbours.” The group uses a flat organizational hierarchy with a formal process for finding consensus, and they say diversity – social, cultural, economic, professional and spiritual – helps them make better decisions. That’s why it’s important every resident has a voice.

The group’s commitment to honest and kind interpersonal communication is remarkable. They read books on the subject, work on exercises. Sometimes they bring in outside help to work through issues. Says Brenda, “It’s probably one of the most difficult, but rewarding pieces of communal living. One can be so easily defeated by a comment or action of another. It is very hard to stay whole and confident, but we are cultivating ways of living together here we would never have learned in the outside world.”

“Socrates said an unexamined life is not worth living,” adds Wilson. “I want to be willing to say to myself, That wasn’t a good decision, but now I’ll do better. That comes with knowing people are there to pick you up when you’re down. It’s safe to lean into the uncomfortable.” 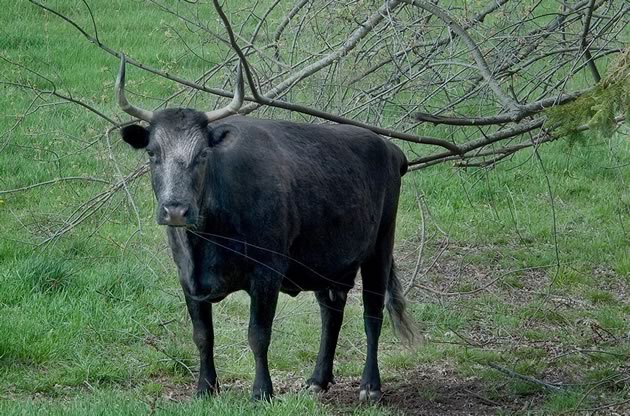 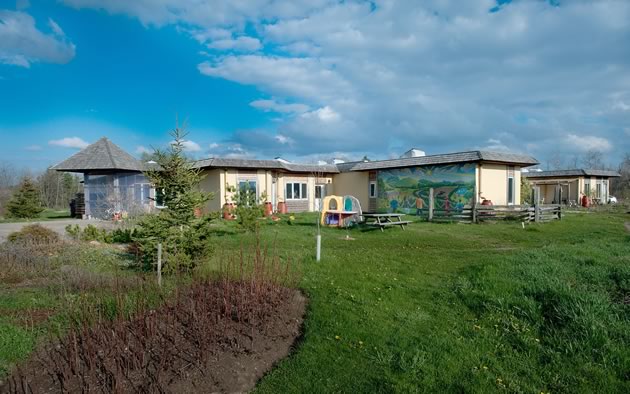 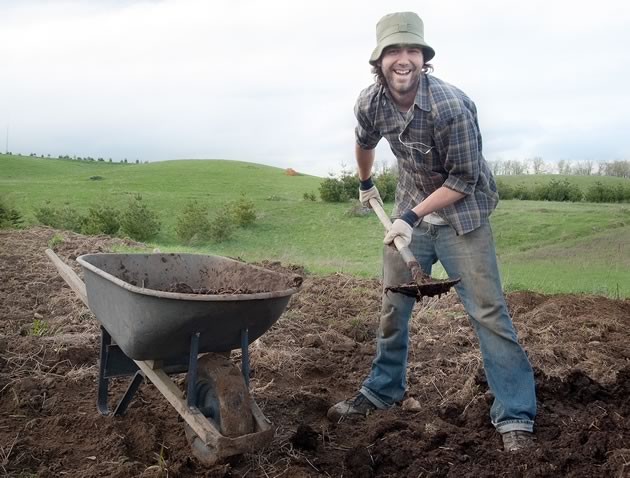 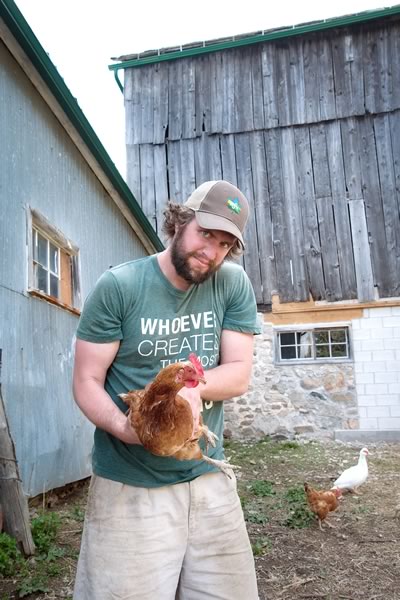 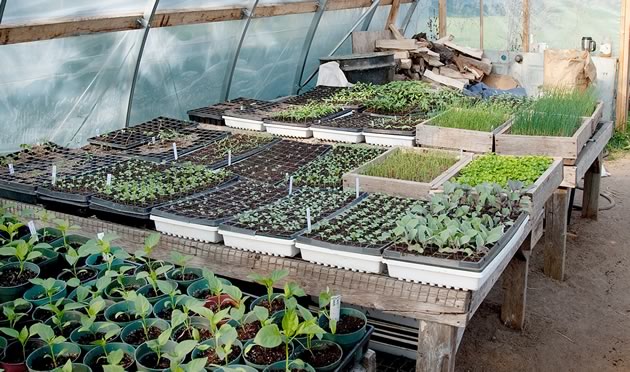 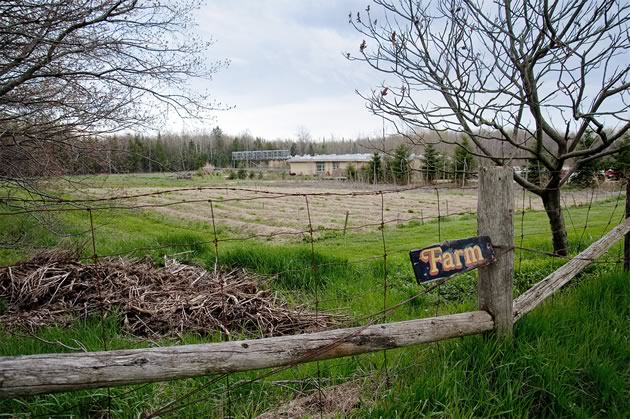 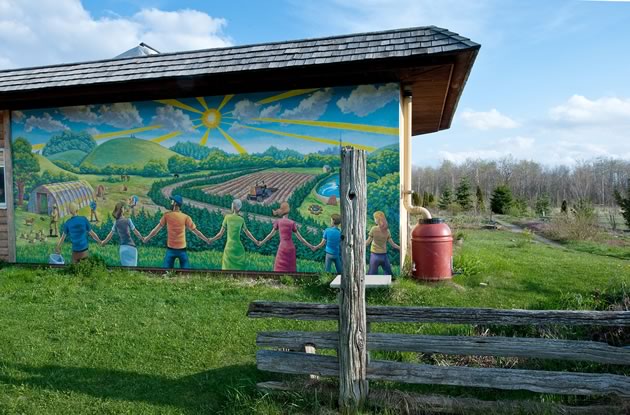 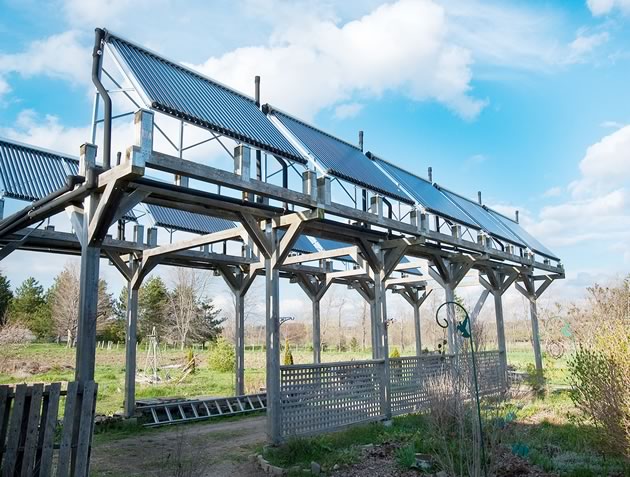 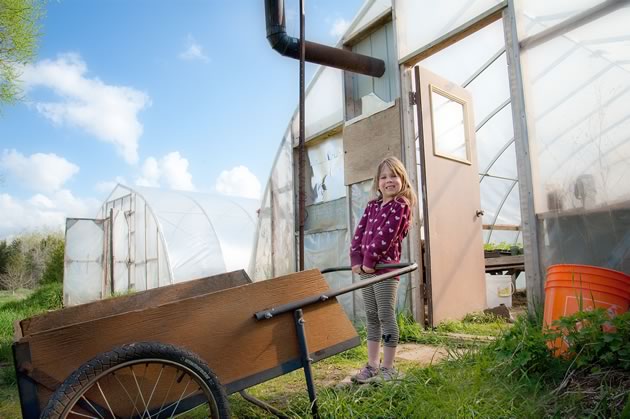 <
►
>
You can experience and learn more about Whole Village in many ways, from buying a share in their CSA to volunteering for a work bee or even becoming a farm intern. Photo by Rosemary Hasner / Black Dog Creative Arts.

What does the next 10 years hold for Whole Village?

Now that much of the pioneering work is done, what does the next 10 years hold for Whole Village?

For the small group sipping green tea and lounging in the Greenhaven living room on a recent spring morning, the priority is clear: further strengthening the sustainability of community culture.

Jon explains how a big part of this is refining their mission beyond living harmoniously. “At first, we just wanted to be accommodating and welcoming to people,” he says. “We thought if someone was interested in us there would be a natural mutuality. Now we realize we need to be clear about what’s involved and what’s expected. We need people who know their own needs and want to do the work to keep the project of the property going. That clarity will help avoid friction.”

Barb chips in, “If ego is above the collective good, that’s not okay.”

Though they celebrate being a shining alternative to the capitalist grind of agribusiness, they have no problem with the goal of boosting profitability in the years ahead – all part of the sustainability piece in our Western world. Right now, many residents have part- and full-time careers off the property and subsidize the farming of the land.

Brenda smiles broadly and says that in a decade she wants to be alive to see the trees grow. She wants to experience the results of this exciting transitional time.

Finally, after listening quietly, Stephen pipes up. “In 10 years I’d like to see even more of a culture of sacrifice. Too many people everywhere want things fixed, like climate change, but they don’t want to sacrifice to make things happen. In community, I want us to keep pushing each other to a higher standard. There’s a lot we get out of sacrifice and then there’s something to draw on when things get tough. I believe it’s sharing the challenges of sacrifice together that makes this journey sustainable.”