Will it last through the family reunion this weekend? Should I have it tested? How do I explain delicately to the guests that long showers are not an option?

Norman Maclean, the author of A River Runs Through It, famously wrote he was “haunted by waters.” If you own a country property, chances are you fret quietly about water a lot, for without a decent supply of it, a place is pretty much uninhabitable.

Will it last through the family reunion this weekend? Should I have it tested? How do I explain delicately to the guests that long showers are not an option?

With all the streams bubbling out of the limestone cliffs of the Niagara Escarpment above our farm, you would think we live with an abundance of pristine water. Several of my neighbours get by with just a couple of concrete tiles sunk in a soggy depression near the house. One doesn’t even own a pump. The water flows downhill through a pipe and up to his second floor bathroom by gravity alone. But these are the lucky ones.

In our neighbourhood the best quality of water is within 25 feet of the surface. The deeper you go, the more likely you are to get iron and sulphur and that rotten egg smell they never tell you about in the real estate office. We sit on a massive deposit of blue clay, hundreds of feet thick in places, which is great if you’re making Blue Mountain pottery, but a famously fickle source of potable water. The last time someone drilled a well on our sideroad, they went down to 130 feet and hit gas. Another neighbour, a mile away, has drilled five times in different places on his property, all dry holes.

When I was a kid, two ancient characters came to our farm in Dufferin County to hand dig a well, lining the walls with timbers and corrugated iron as they went down. They worked away with pick and shovel for a week in complete silence. Finally, my father went out and called down the hole to ask how they were doing.

“We’re into the blue clay!” a cheery voice answered.

“What does that mean?” asked my dad.

At the end of the second week he went out and asked them again.

A few minutes later, they broke through the clay into a limestone seam and the water came in so fast they had to scramble out of the hole ahead of it. It was milky white and looked undrinkable.

“It looks like very hard water,” said my dad.

The men nodded in agreement. “Any harder and you could skate on it,” they said. They advised him to run the hose for a while. Water the lawn and wash the car. My father asked how long the cribbing was likely to last and they estimated 25 years. Then they left. My dad washed the car and it turned white. Then he watered the lawn and it too turned white. Eventually the well settled down and cleared, but I grew up thinking it was normal to use half a bottle of dish soap to raise bubbles in the sink. 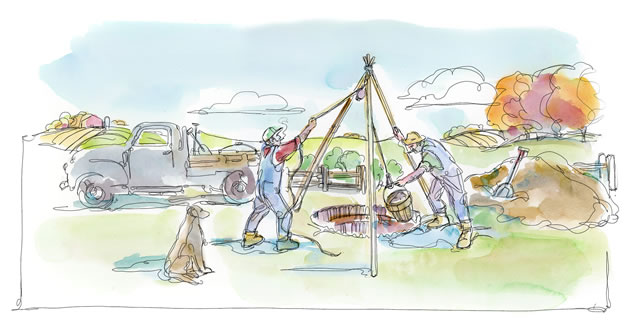 Twenty-five years later, almost to the week, we were all sitting at breakfast when the ground trembled slightly. A few minutes later the taps were hissing. We went out to look down the well and saw that the cribbing had collapsed in a jumble of corrugated iron and rotted timbers, right on schedule. The grandsons of the original team came out to dig another hole.

Here at Larkspur Farm I have now dug three wells, following two wiggly lines laid down by the local water witch, old Joe Sampson, nearly 40 years ago. Joe came well recommended. They said he could find anything, even unmarked graves down at the cemetery, and he could tell you which ones had died by drowning. He said I had a choice between going down 30 feet for a small supply of sweet water or 100 feet for a larger supply of hard water.

We eventually settled for the second option and our water is hard enough to skate on, loaded with iron, calcium and sulphur. But we are blessed with all the modern inconveniences and a lifetime contract with Select Water in Creemore to remove these irritants.

The place remains habitable for now. But I am haunted by water.