Dr. Purvis’s 12 Steps to Getting Horse-Free

“Nothing lives longer than a horse with a health problem!” says the vet as he purrs out the lane in his limited edition Land Rover.

I just came back from a horse-riding adventure in the Rockies with my brother-in-law. It’s been ten years since I’ve been on a horse and I was worried that climbing back up in the saddle might make me want to give up the vow I made a decade ago never to own another horse. But I was fine. I walked away from the ranch without a twinge of regret.

This is because I took Dr. Purvis’s 12-step program to get myself horse-free. He’s a young vet in our neighbourhood who got tired of the suffering he witnessed in his daily practice and decided to do something about it. This is how it goes:

Step 1. Admit there’s a problem. You bought the horse years ago for a ten-year-old daughter who swore she would brush it every day and lavish it with affection. That was before she discovered boys, clothes, makeup and Facebook. Now the horse stands in the pasture swatting flies with a companion horse and two other visiting horses dumped off by your daughter’s friends before they all went off to careers in investment banking.

Each year these horses munch through five tons of hay and convert it to ten tons of manure, all of which has to be shovelled by hand. Each animal suffers an expensive ailment that brings the vet to your door with another soul-crushing prescription. You ask hopefully if the diagnosis is terminal, but he just grins.

“Nothing lives longer than a horse with a health problem!” he says as he purrs out the lane in his limited edition Land Rover. 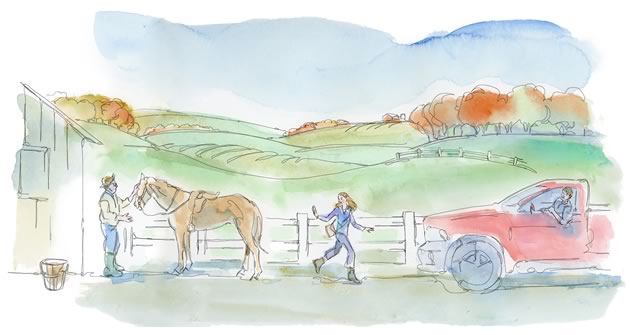 Admit there’s a problem. You bought the horse years ago for a ten-year-old daughter who swore she would brush it every day and lavish it with affection. That was before she discovered boys, clothes, makeup and Facebook. Illustration by Shelagh Armstrong.

Step 2. Imagine the freedom. In economics, the term “opportunity cost” refers to all the things you might be doing if you didn’t have horses. Not having a horse is like being able to go to Tuscany pretty much anytime you like.

Step 3. Stop hanging around horse people. You know the type. People with British fox-hunting prints on the wall and three decompression chambers between the barn and the broadloom carpet. They have lantern jaws, gin veins on their noses and voices that hang on the air like hoof paint. They talk all night about stud books and trips to Lexington, and you stagger away from their dinner parties with exactly the same feeling you get on the way back from the city that you aren’t making nearly enough money or having nearly as much fun as everybody else.

I would share more details of this program with you, but the other nine steps are proprietary and I would be doing Dr. Purvis a disservice by revealing them. It is also difficult and dangerous to try to follow these steps without professional assistance.

Dr. Purvis scared me into the program that day when I went into the office for yet another gallon jug of phenylbutazone, the horse anti-inflammatory that comes in the orange crystal flavour. He asked me if I was using the “bute” myself. I insisted I was not. He took me by the elbow.

“They don’t make that stuff in orange flavour for the horse, you know. It’s for the trainers.”

“You take a really good farm, one that’s been in the family for three generations and has sent kids to college. You put one horse on that farm and it starts on a downward slope to destruction. Pretty soon the guy is spending too much time at the track and then too much time in the bar at the track. Then he’s into the bute and before long the copper weathervane is hanging at an angle off the roofline, the boards are blowing off the barn and the white fences are all tipped over.”

It was a chilling story. It scared me so badly I signed up. I learned there’s only one way to recover any money on a horse and that is to sell it for a whole lot less than you paid for it. Dr. Purvis taught me how to tell a white lie: “She’s a dear old thing with no bad habits, trailers well and is good with children.” If you can learn to do that, if you can take your lowest price and cut it in half, you will soon enjoy that light sensation horses get when the saddle and bridle come off and they are released into a lush pasture – forever.

Call me. Confidentiality is assured.