Imagination is the only weapon in the war against reality.
—Lewis Carroll, Alice in Wonderland

It’s not that Ron Adam and Glenn Jones are indecisive. It’s that they’re careful. That’s why they visited the house they now call home at least seven times before buying it. Not included in this tally is the number of times they walked Chloe, their German shepherd, in Mono Cliffs Provincial Park just across the road from the house. On those walks their mantra became, “Wouldn’t it be great if we lived across the street?” Now they do. Although they already lived in the country, the area around their previous home was becoming built up and congested. The allure of deep countryside finally became irresistible.

It’s not that the two are indecisive about design either. They’re interior designers by trade – and they’re adventurous. By turns whimsical and elegant, their Mono home presents a wide range of design ideas. Some areas are a riot of colour and texture, others are cooler and quieter. One suspects Alice and the Mad Hatter would feel quite at home here. 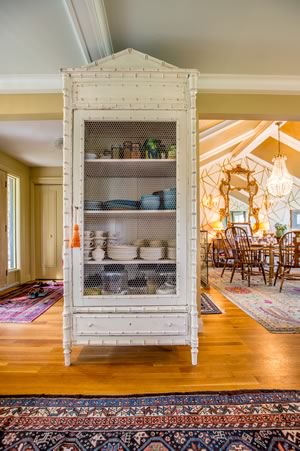 A new acquisition, the antique dish cupboard adds to the eclectic decor. Photo by Pam Purves.

Initially it was the great bones, simple lines and “glorious windows” of the modernist house that appealed to the pair. And when they learned the house contained no volatile organic compounds, or VOCs, because of the severe allergies suffered by the previous owner, its appeal grew. All cupboards, windows, doors, floors and joists were made of natural wood and especially solidly built to prevent pollen and dust from intruding.

And then there was the size of the property. At seven acres, it was large enough to build a barn and paddocks for their horses.

But building a barn on a rural property on the Niagara Escarpment wasn’t a snap. Getting the permits was a 16-month odyssey. The finished structure, with its classical northern Ontario design features, is linked by a breezeway to the matching garage. The building has attracted a fair number of curious passersby intrigued by what they assume is a century barn.

The aisle between the horse stalls in the barn has become a favourite venue for large, madcap dinner parties. A long table stretches the length of the aisle and is lit by a glamorous fixture from the old Royal York ballroom. You can imagine guests thinking “curiouser and curiouser” as they dine under a chandelier in the barn. “The horses love it,” says Ron, who is a member of the Toronto and North York Hunt. He and Glenn frequently host the club at their “Gourmet Hack” that features dinner in the stable.

With the equine accommodations completed first, it might seem as if the horses took precedence, but actually Ron and Glenn decided to wait a year before starting work on the house. They wanted to live in it to get a feel for how they would use it. As principals of Adam and Company Interior Design, which deals with clients around the world, the two undertook the design and most of the reconstruction themselves. It is a work of wonderful imagination.

And they wanted to add colour! “Our lives are serious, so we want the house to be whimsical,” says Ron. Indeed, their design motto might be “Live in Colour.” They try to guide their clients away from the currently trendy monochromatic and soft-colour aesthetic. In their house, they even put vibrant colour on the ceilings, an unexpected touch that casts a soft glow over a room. 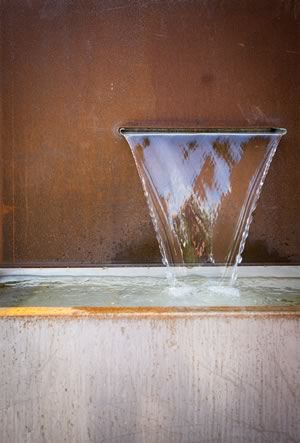 A two-tiered waterfall adds soothing sound and motion to the terrace. Photo by Pam Purves.

Banks of windows on either side of the generous foyer bring light directly into the open dining and kitchen areas. But there is seating and enough of an enclosed feeling to make the space a welcoming transition from outdoors to in.

The dining area is a treat. At once grand and whimsical, the room’s bold use of a theatrical wallpaper, a new ceiling detail from Multi-Cast Design and a splendid reproduction of a chinoiserie mirror the pair had seen in Paris take visitors by surprise. Ron and Glenn also installed a large Italian chandelier and mounted a 19th-century terra cotta deer head on the wall – so authentic-looking it sometimes shocks people who mistake it for real. All these elements take full advantage of the room’s very high vaulted ceiling.

The exuberant feel extends to the kitchen, which is accented with antique furniture that mixes well with the contemporary cabinetry and successfully integrates the kitchen into the entertainment area.

The adjacent living room is warm and more traditionally English in feel. A new Rumford-style wood-burning fireplace looks as if it is built into the wall and has been there forever. But this feature was actually designed to eliminate the need for a masonry chimney, which considerably reduced the cost.

Because Ron and Glenn love to repurpose things, they try to use existing or inexpensive items that have good lines. They view repurposing as a way of showing respect for the environment, so refinishing and painting are integral to their design approach.

The lower level of the house contains their design studio, which offers ample space for Glenn and Ron and a couple of colleagues. The south and east walls of this level are above grade with lots of windows and an exterior door that leads to a large patio. The patio is partially enclosed by two walls made of large sheets of Cor-ten steel, a raw steel product that rusts attractively when exposed to weather. A sculptural element and a water feature add to the aesthetic. 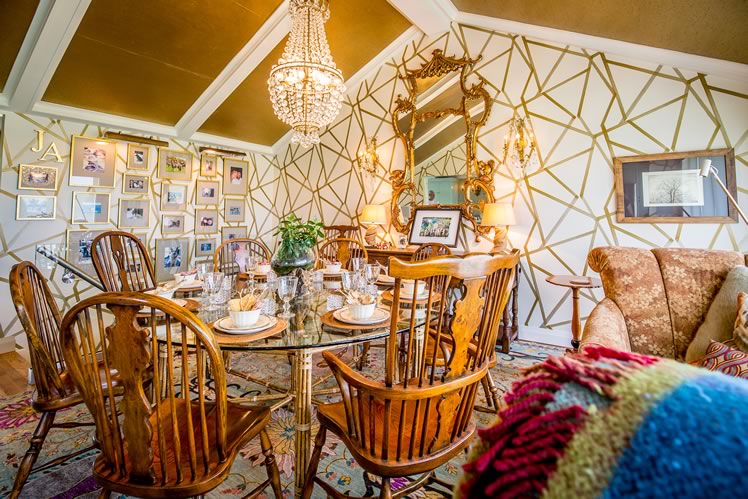 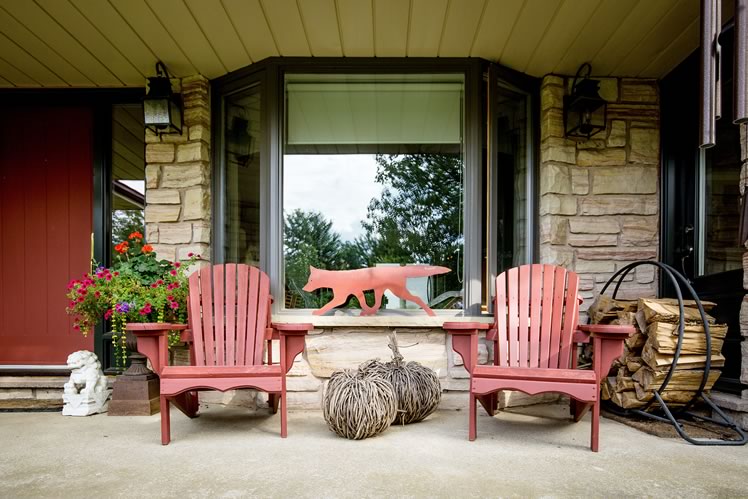 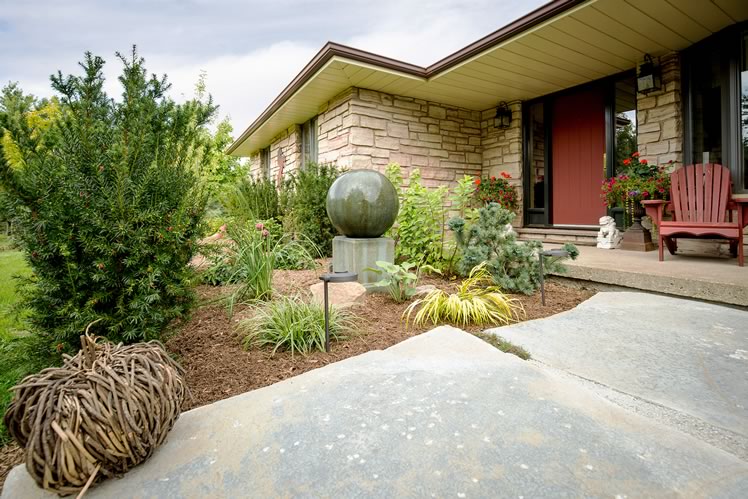 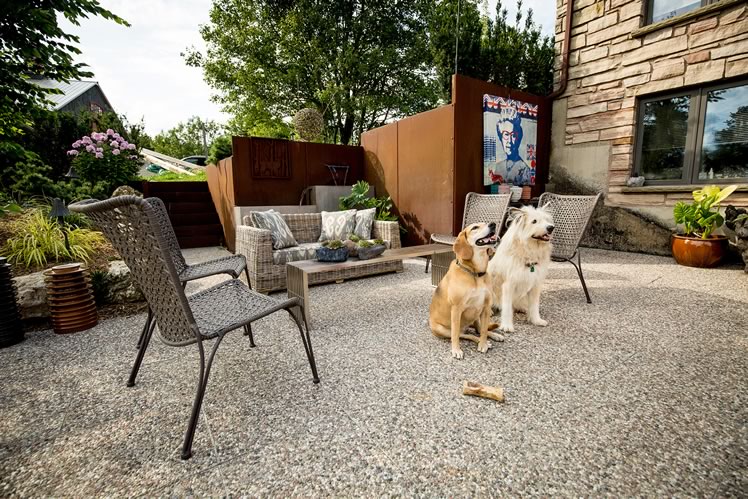 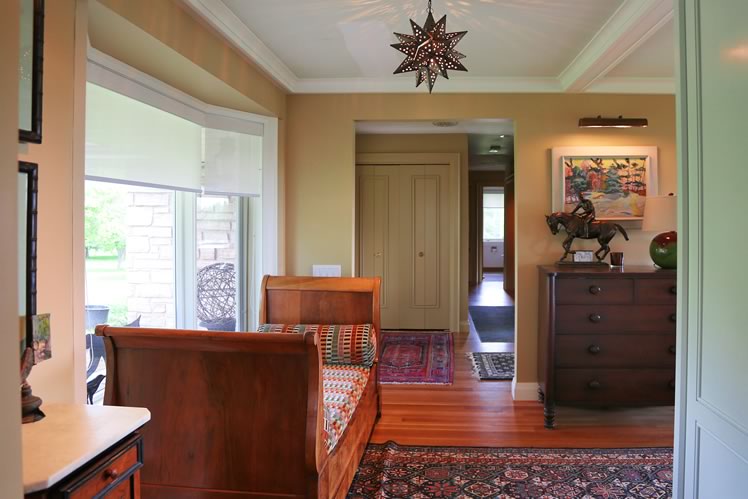 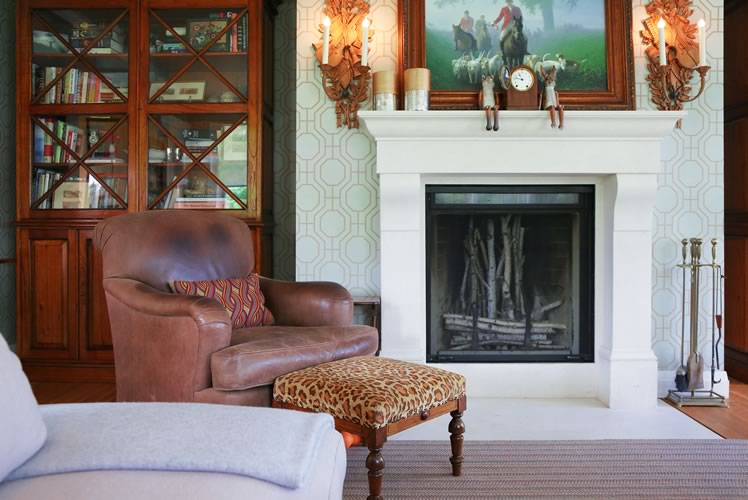 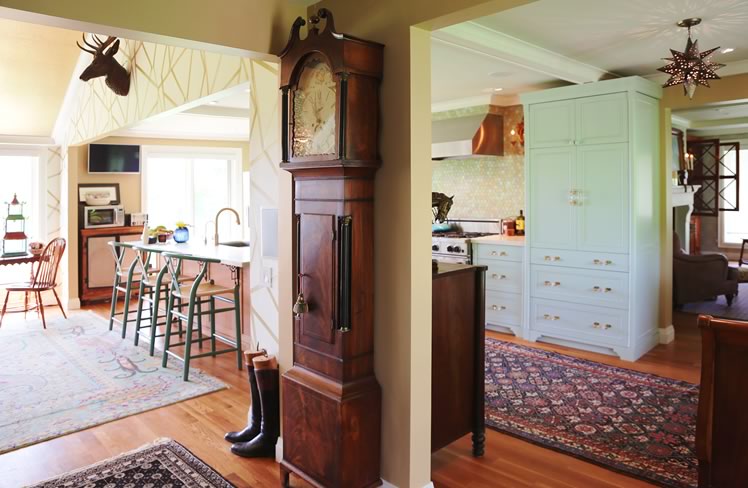 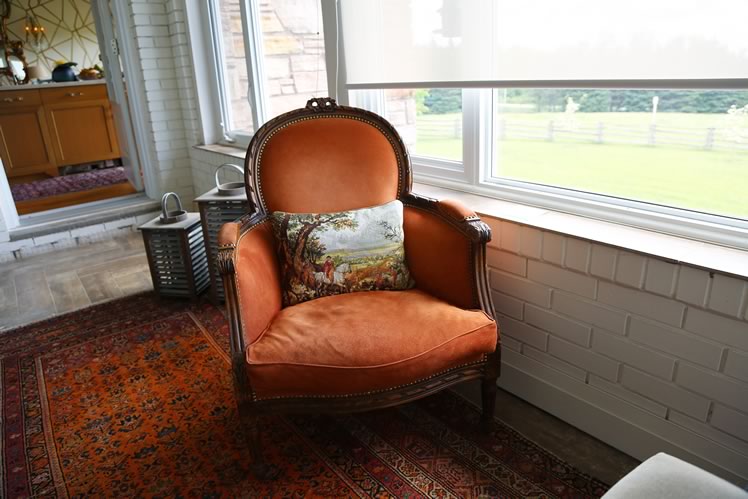 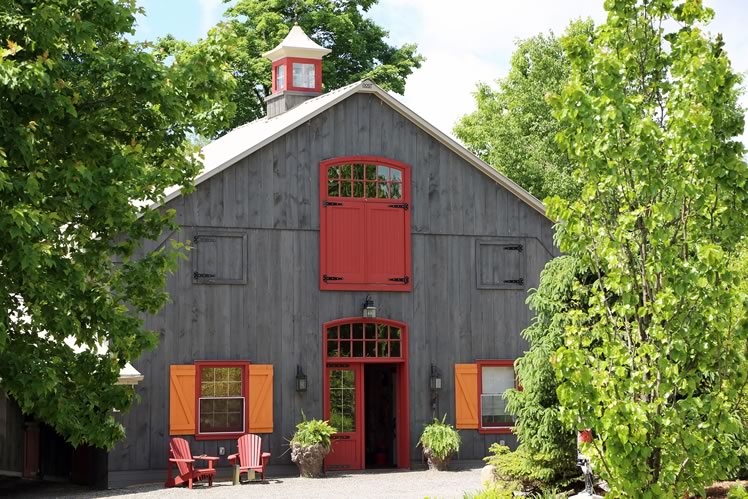 <
►
>
In the uninhibited riot of colour and texture of the dining room, guests can’t help but leave any stuffiness at the door. Photo by Pam Purves.

The couple describe the landscaping, directed by Glenn, as architectural. Hedges and gardens in front of the house largely conceal it from the road and happily prevent the two dogs who have succeeded Chloe from seeing the cars they love to bark at. Raised cutting beds provide fresh flowers in the house throughout the growing season.

For themselves and their clients, Ron and Glenn encourage investing in Canadian materials and buying the best that budgets allow. For the rest, they encourage the imaginative rethinking of existing pieces. With their taste for eclecticism, the two don’t hesitate to go for drama when the opportunity arises – as their home, with its spirited sensibility, so clearly demonstrates.