Pickleball? “What kind of a crazy name is that?” I wondered as I headed over to the Caledon Community Complex in Caledon East to give the increasingly popular game a whirl. Because pickleball is billed as a combination of tennis, badminton and Ping-Pong, and considered ideal for seniors, I imagined the sporting version of instant mashed potatoes layered between red Jell-O and prunes.

Several players had arrived before me, most of them grey haired. I wore a tennis skirt and tennis shoes because I had been playing that more traditional racquet sport for years. Winona Clarke placed an oversized Ping-Pong paddle in my hand and suggested we warm up. “Are you a tennis player?” she asked. When I answered yes, I expected her to assure me I’d catch on quickly. But no. Instead she warned, “You’ll completely miss the ball until you get used to the short-handled paddle.”

From the other side of the tennis-like net, Winona gave the wiffle ball, a plastic ball with holes in it that’s a little larger than a tennis ball, a confident smack. It bounced in front of me and I took a tennis-like swing. You guessed it: swoosh. Only in my imagination did any part of my paddle make contact with any part of that yellow ball. I visualized Winona’s knowing grin. Fortunately my inauspicious start didn’t last long. I adjusted my stroke and caught on pretty quickly. My tennis experience helped a lot. The slower-paced wiffle ball makes the game easier than any of the sports it’s based on. 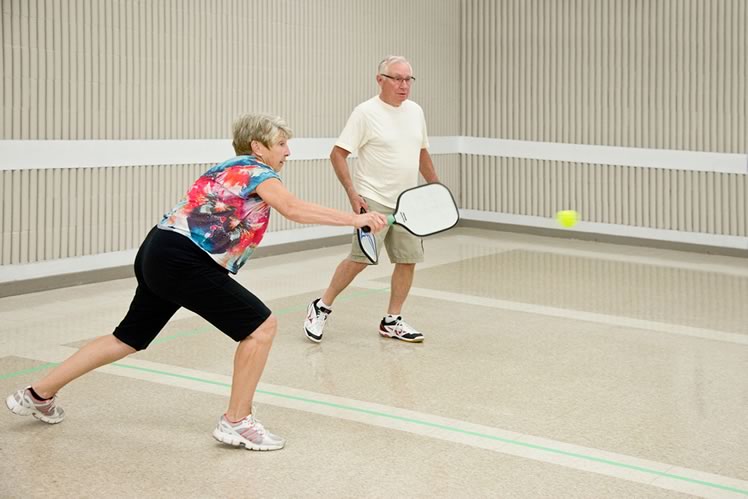 Two other players joined us, including Winona’s husband Keith. As our match progressed, I realized Keith’s strategy was to use his brain because speed was no longer his greatest strength. After observing his play, I was surprised to learn he had no previous experience with any racquet sport. “It took a couple of months for me to really catch on,” he said. From fall through spring, Keith now plays two or three times a week in the town of Caledon’s drop-in program. 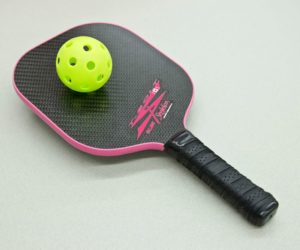 You’ll completely miss the ball until you get used to the shorthandled pickleball paddle. Photo by Pete Paterson.

Pickleball games usually involve two players a side on a badminton-sized court, though singles can be played as well. The small court and slow ball mean there’s less emphasis on quick, agile movement. The game allows smart players like Keith and Winona to play competitively against fleeter-footed ones. That said, there is nothing idle – nothing instant mashed potatoes – about pickleball. Unlike in golf, for example, players never stand around watching and waiting. All players are involved in every point, so they never stop moving.

On a tennis court, the rallies that are the most fun occur when all four players battle it out at the net, keeping the ball in play without letting it touch the ground. It’s fast and furious. Rallies like this are not uncommon in tennis, but most players would love it if they happened even more often. Well, forget tennis; get on a pickleball court. Because it’s harder to hit a winner with a wiffle ball on the game’s smaller court, there are more – and longer – net rallies.

I warmed up to the sport even more when I learned it’s named after a dog. Apparently U.S. congressman Joel Pritchard, one of the game’s founders, owned a cocker spaniel named Pickles. Cool. But alas, it turns out Pickles was born some years after Pritchard and two friends created pickleball in 1965, and it’s more likely the dog was named after the game.

According to reporter and blogger Tristan Baurick, who interviewed members of Pritchard’s family, no one is really sure how the game came to be known as pickleball. Some say it’s because in rowing, a pickle boat has a mixed crew of leftover rowers. Others say it’s because a pickle boat fishes for pickerel, which apparently means it’s the last boat back to shore. But how you get from these nautical terms to a racquet sport eludes me. 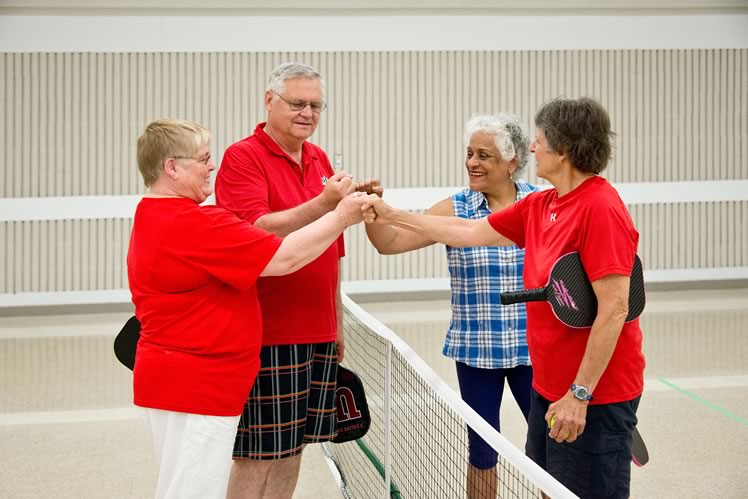 And who really cares anyway? More important is that pickleball is picking up steam. In Ontario it has its own association and online store, as well as a handy online list of all the places you can pick up a game. There are provincial and national championships, and a new wheelchair league.

Locally, pickleball is played primarily indoors. The two courts in the Caledon Community Complex in Caledon East are filled for two and a half hours three days a week during spring, fall and winter. “Sometimes we have 25 or 26 players out,” said Cheri Cowan, an avid player. Winona says the most competitive place to play is at the Athlete Institute in Orangeville. There is also drop-in pickleball at the Caledon Centre for Recreation and Wellness in Bolton. In Inglewood, pickleball lines have been added to the tennis courts to accommodate the swelling ranks of baby boomers who describe pickleball as fun, lots of laughs, social and good exercise – though no one, I noted, mentioned liking its name.

A couple of links to help get you in the game: 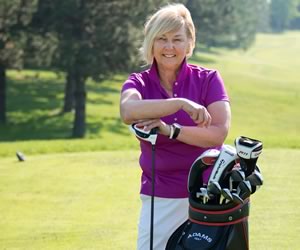