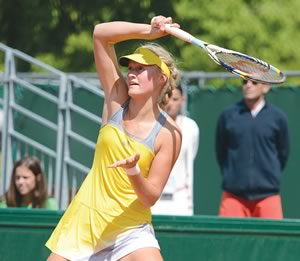 An acquaintance of mine immigrated to Canada in the 1950s to escape racial tensions at his home in South Africa. An avid tennis player, he headed down to the local racquet club in Montreal hoping to make some friends. As he walked up to the courts, he noticed a large green sign. In block letters, it stated, “Whites Only.” It took him a long moment to realize the sign referred to the colour of the players’ attire.

Modern tennis has shed much of its genteel “Whites Only” image. Today’s top players, including Canada’s own Milos Raonic and Eugenie Bouchard, are superstars, often admired as much for their good looks and colour co-ordinated outfits as for their slice backhand. While the local tennis scene in Headwaters has been active for years, it is attracting a new crop of youngsters drawn by Canada’s unprecedented success on the world tennis stage. Now seeded number seven, Bouchard was the first Canadian ever to break into the top five seeded players. Raonic, the eighth seed, was a semifinalist at Wimbledon last year.

Headwaters Racquet Club, a privately owned facility in Orangeville, reports its junior programs are swelling by 20 per cent per year. Joanna Phang, formerly a member of Malaysia’s national team, is a pro at both the Racquet Club and several of the region’s nine outdoor clubs. Between the ones in Caledon Village, Erin, Belfountain and Palgrave, Phang instructs some 40 to 50 kids. She says Erin’s club is so busy “there are weeknights when members have to wait for a court.”

All of this activity, says Phil Staite, a Caledon Village resident who had a successful varsity career, is the result of there being over 2,000 active local players – some of whom have won provincial and national titles in their age groups.

People are drawn to tennis (and other racquet sports) because it requires a mix of technical skills and fitness, doesn’t require much equipment (tennis shoes, a racquet and three balls) and is simple to organize. You only need two players for a game of singles, or four for doubles, rather than a whole team. Moreover, tennis is considered a “life sport” – one that can be played at all ages. Brian Millar, head pro at the Headwaters Club, says they have four-year-olds enrolled in Tiny Tennis, and octogenarians can be crafty players indeed.

While the Headwaters Club is tennis central for players of all ages and skill levels in the winter, it’s the nine outdoor facilities that echo with the sound of tennis balls during summer.

In addition to being simply places for people to play a “set” or two with a friend or friends, most clubs also offer lessons for kids and adults. There is also a host of leagues and a number of tournaments. In other words, if you want to play tennis in Headwaters, there is a club and a program for you.

The much loved Caledon-Dufferin Interclub League is as competitive as it is fun. Teams from each home community play against one another on a weekly basis. The league culminates in a day of playoffs and great food. The ever-popular 95+ Mixed Doubles Tournament in Mono Centre was the brainwave of Carol Hall, the owner of the Mono Cliffs Inn, tournament sponsor and two-time winner. Hall realized that if the combined age of a mixed doubles team had to add up to over 95, it would force participants to play with someone other than their spouse. As Hall puts it, “There was too much bickering between couples.”

Proving tennis is both a lifelong sport and intergenerational, one year my mother, who was almost 80, played in the 95+ tournament with Carol’s son Jason Hall, who was 19. They didn’t win, but they had a good go of it. 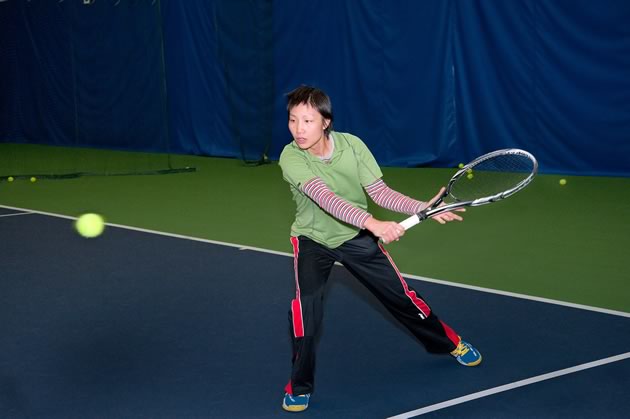 Since it opened five years ago, the Headwaters Racquet Club has been adding programs as members and non-members demand them. There is a popular men’s league, some house leagues and two InterCounty women’s teams, as well as lessons for adults and kids of all skill levels taught by six pros. Another option is Cardio Tennis, “a fun group activity where players of all abilities enjoy tennis together.”

JoAnn Pilkey, a pro and provincial champ, says the club’s Cardio Tennis is attracting people who may not otherwise be interested in the game because it’s free for the club’s fitness members.

Given all this tennis, it’s not surprising that Headwaters has spawned a potential superstar.

At six foot two and about to turn 20, Erin Routliffe is burning up the courts in the Southeastern U.S. where she’s on a tennis scholarship at the University of Alabama. In 2012, Routliffe made it to the quarterfinals in the junior women’s doubles competitions at both Wimbledon and the U.S. Open. Last year, she and her partner won the NCAA Doubles Championship and she made the honour roll.

A former Mayfield Secondary School student, Erin started playing in Caledon Village. She may wallop her forehand, but Erin’s advice to other players is pretty simple: “Make sure you are having fun.” 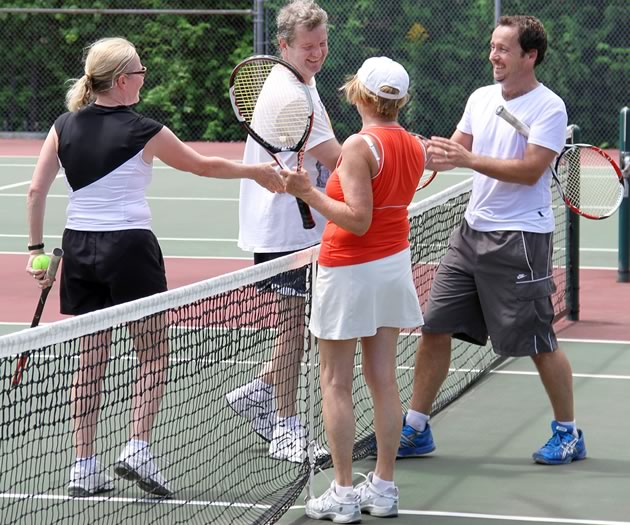 Play Tennis In The Hills

With the exception of the privately owned Headwaters Racquet Club in Orangeville, the region’s outdoor tennis clubs are municipally owned courts that are managed and maintained by volunteer boards. Members have priority court access. Membership fees vary. Orangeville has a public court alongside the Orangeville Tennis Club. It is free to play on this court.