The tweets and accusations of fake news in today’s media seem almost dainty compared to the Orangeville Sun’s lambasting of its rival weekly, the Orangeville Advertiser. 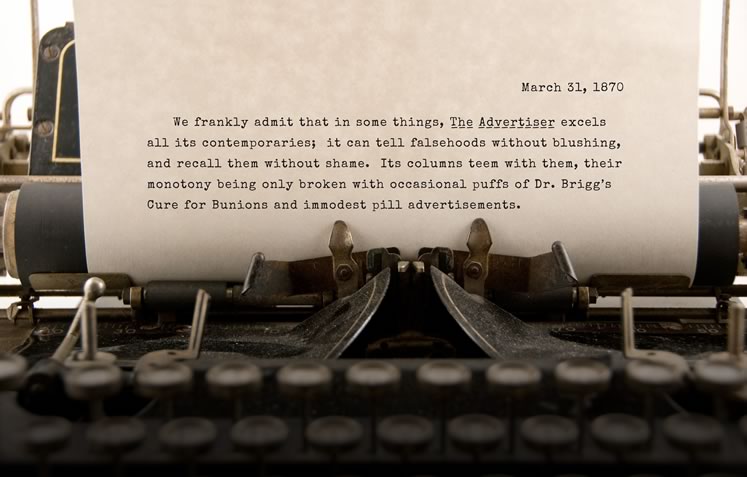 “The Advertiser … never rises out of the cess pool of village scandal and village squabbles [and] traduces men of known probity and integrity, preferring false charges against them and accusing them of villainy at the same time that it extols nincompoops who have never done anything to deserve public commendation …”
(Sun, June 16, 1870)

This was most uncharacteristic language for John Foley Sr., editor and publisher of the Orangeville Sun. Although 19th-century newspapers regularly indulged in harsh language and inflammatory attacks, Foley, in addition to his reputation for accurate and comprehensive reporting, was widely respected for his calm and balanced approach. Not, it seems, when it came to The Advertiser.

It may have been the reality of competition that stirred the pot. From its launch in 1861, Foley’s Sun had had the market to itself, and it’s likely the appearance of The Advertiser in 1868 had an impact on revenue. It could be that the new journal was Liberal politically, while Foley, despite professing neutrality, leaned Conservative. And Fisher Munro, editor and publisher of The Advertiser, was an Orangeman. John Foley was a Roman Catholic (although thought to be a “good” Catholic by local Orangemen because he reported Lodge activities fairly and at length).

What an examination of The Sun’s pages throughout 1870 suggests, however, is that the cause of Foley’s high dudgeon was his certain conviction that the rival paper was inaccurate, that it deliberately skewed facts, and that it casually maligned stalwart local citizens. The Advertiser, Foley believed, got things just plain wrong!

The headline above appeared in The Sun in March 1870 (it’s a sample; there were more like it). The column below it dives headlong into correcting what Foley asserts are gross inaccuracies in the rival paper’s reporting. It begins by refuting in great detail an Advertiser accusation that The Sun had failed to report properly on the poor attendance of certain trustees at school board meetings. And then, to emphasize the “twaddle,” the column describes an abuse of privilege by a trustee (who allegedly sold goods to the board at an inflated price), a transgression Foley says is the real news but which The Advertiser had either missed or ignored.

The column requires multiple readings to get at the facts, not least because it shifts from accusing The Advertiser of being “a fabricator of falsehoods” to a personal attack on its editor Fisher Munro (without actually naming him), calling him “a drivelling writer” who relies on a “vocabulary  of opprobrious epithets.” For a newspaperman with a reputation for concentrating on facts, Foley devotes as much space to condemnation as he does to evidence. Even for a 19th-century newspaper – and especially for him – this is powerful stuff.

Under this headline in November 1870, The Sun again hammers on “fake news.”

“The editor of The Advertiser has a predilection for misrepresenting facts, and drawing from them unwarrantable conclusions, and the circumstances attending the investigation respecting the escape of [a] prisoner, afforded a favourable opportunity for the exercise of this faculty.”
(Sun, Nov. 10, 1870)

Once more in voluminous detail, The Sun, while wearily making clear it wished it didn’t have to, sets out to correct what it calls The Advertiser’s complete misreporting of an incident involving an escaped prisoner. Foley tells Sun readers the story could have been “lucidly stated and intelligently commented on in a quarter of a column,” but instead The Advertiser took four columns to “befog the whole matter in frothy furious words” and turn it into a muddle.

Was one paper always right, the other always wrong?

Regrettably, there are no surviving copies of The Advertiser (whereas almost the entire corpus of The Sun is preserved and archived – a reflection perhaps of its regard in the community). Thus the tangles of 1870 – and to a lesser extent of other years – are available to us only from one side.

But Sun’s closet may indeed have a skeleton or two. For example, The Advertiser spent four columns on the prisoner story because Foley, in investigating the matter while it was unfolding, had – probably innocently – got himself involved in it, and The Advertiser was keen to make that clear to its readers. So it’s no surprise the two papers had a different take on the story.

Despite the lack of preserved copies, we have a good idea what The Advertiser was printing in this media back-and-forth because The Sun frequently responded to what its rival reported, and Foley’s style was always to provide deep background, sometimes quoting The Advertiser’s prose at length before taking it apart.

As to who was right or wrong, the weight of evidence suggests Foley did have some cause to berate his rival. Fisher Munro, founding editor of The Advertiser, became a police magistrate in Orangeville (with a reputation for falling asleep during hearings) and so was often at the centre of the news rather than reporting from the outside.

Furthermore, whereas Foley remained at the helm of The Sun until his death in 1882, the editorship of The Advertiser was in a variety of hands until it closed in 1902. Eleven different names are listed as editors of the paper, with Munro resigning and reappearing twice. Given that Foley’s attacks generally ceased after 1870 (it appears Munro’s first resignation was around 1871), it may well have been a matter of personal antagonism toward The Advertiser’s first editor. (Munro left Orangeville in the early 1890s and died in Buffalo in 1917.)

Most telling, though, is that a broad review of Foley’s reportage over his 21 years at The Sun reveals the career of a responsible journalist who was very sensitive to the power of the press in his community and who was always in search of real news. For years the masthead of his paper proclaimed, “Extremes Are Error and Truth Lies Between.” There’s little room in that philosophy for fake news.

In October 1891, The Advertiser, now edited by R.J. and Wm. Wallace, editorialized on what it felt was inappropriate behaviour by certain young women in Orangeville and named names. J.W. Aiken, husband of one of the women, immediately cancelled his subscription, a response which the paper reported in a subsequent issue. Mr. Aiken reacted to this by visiting the offices of The Advertiser and punching out both Wallaces. Aiken was charged and fined ($10 for R.J and $1 for Wm.). The entire incident was reported gleefully in The Sun by James Foley Jr. who, in a style reminiscent of his father, assured everyone The Sun would “leave scandal and the like to those who make a specialty of that commodity,” while his paper would continue to be “a respectable journal.”

Did The Advertiser apologize?

Although The Sun doesn’t provide the misreported dollar figure in this column, it appears to have wrung an admission of error from The Advertiser in March 1870:

“We have a duty to perform in an endeavour to prevent the moral suicide of our erring contemporary, and in refuting his slander against our citizens;  we have pointed out the folly of his conduct and corrected some of his misrepresentations;  and though we may not have improved his understanding, we have at least wrung from him the humiliating confession that he deals largely in misrepresentation.  The statement that The Sun had charged $13.50 for publishing the Auditor’s Report for Orangeville for 1868, he now admits to be false …” 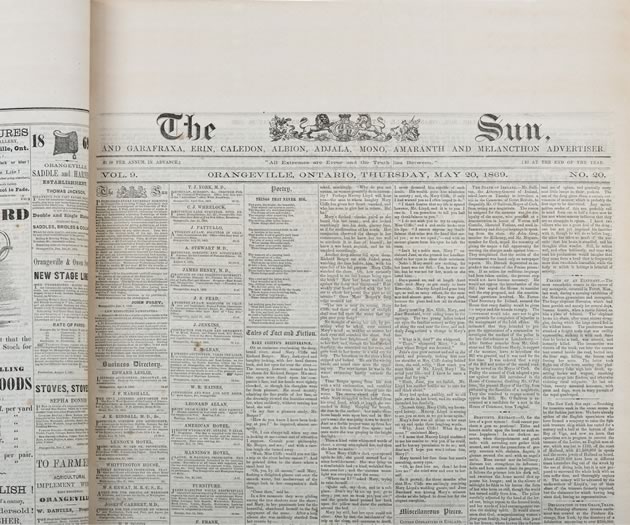 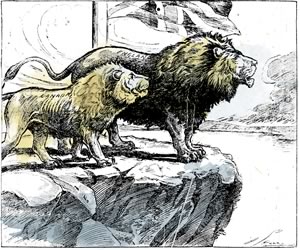 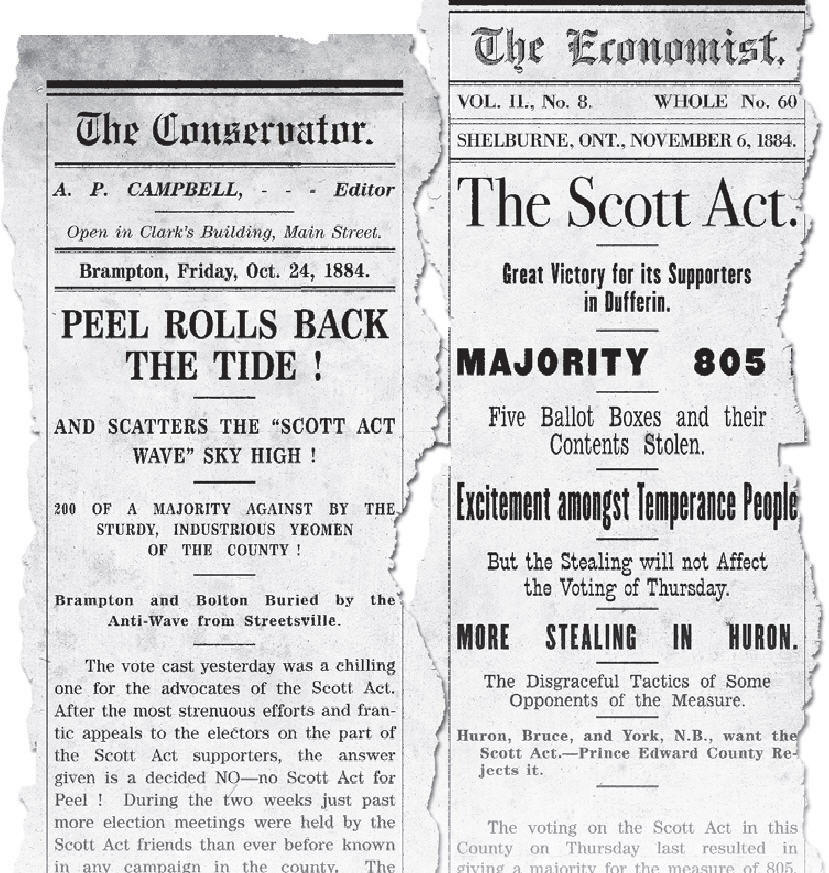 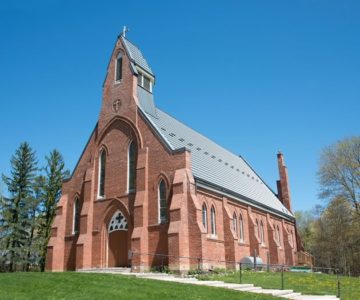 The 19th century saw tiny villages spring up all over these hills, bearing sturdy names like Lockton and Elder, unusual names like Biggles and Shrigley, and pretty names like Camilla and Silver Creek. They faded away, but left a legacy that helped create the hills we know today.