There is not an inch of wasted space at the Caledon Hills Brewing Company headquarters on the edge of Bolton. Stepping through the side door of the former winery, a visitor comes face to face with the supersize means of production Stefan Riedelsheimer uses daily to create 2,000-litre batches of the easy-drinking Vienna-style lager he introduced in 2016, and two newer offerings, the rich Deadly Dark and the light, summery Bohemian Pilsner. 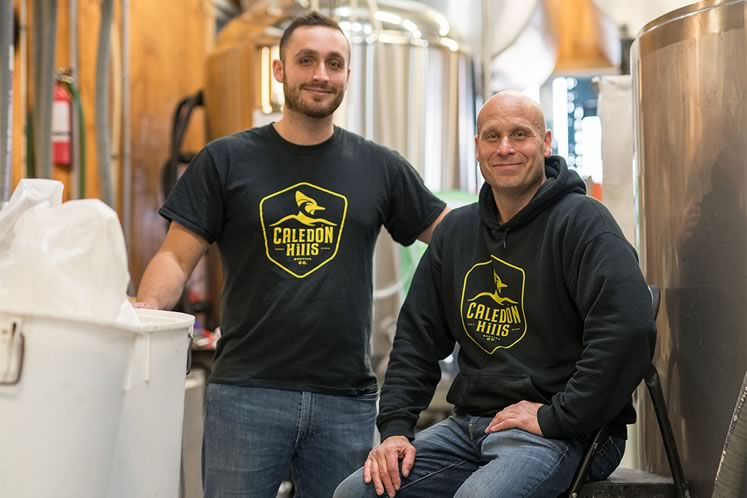 Stefan and son Sebastian work harmoniously together in their chock-a-block brewery. Photo by James MacDonald.

The tight quarters mean brewmaster Stefan and his son Sebastian move quickly between the bags of grain they shovel into the tall, cylindrical brew tanks, the lauter tun, an oblong trough that sieves out the spent grains from the beer-to-be (a local farmer then feeds them to his cattle), the fermentation tanks, where they add yeast and let it do its thing, and the canning station. Kegs, stepladders and the hoses used to move liquid to and fro fill in the gaps.

It’s a good thing father and son are close, sharing an exuberance for what has become the family mission and an earnest belief in the power of hard work. “My dad’s been making beer for 25 years,” says Sebastian, who has his dad’s intense eyes. “We know any beer he brews is good.”

Stefan learned the craft in his native Germany at the Munich-based Doemens, a brewing academy dating back to 1895. After immigrating to Canada, he worked at Upper Canada Brewing and owned a chain of brew-your-own stores. Sebastian, one of three sons, graduated in 2015 with a business degree from St. Lawrence University in New York State, and soon threw his hat into the ring, helping brew, deliver and market his dad’s creations under its pileated woodpecker logo. His mom Monica recently left her local newspaper sales job to help. 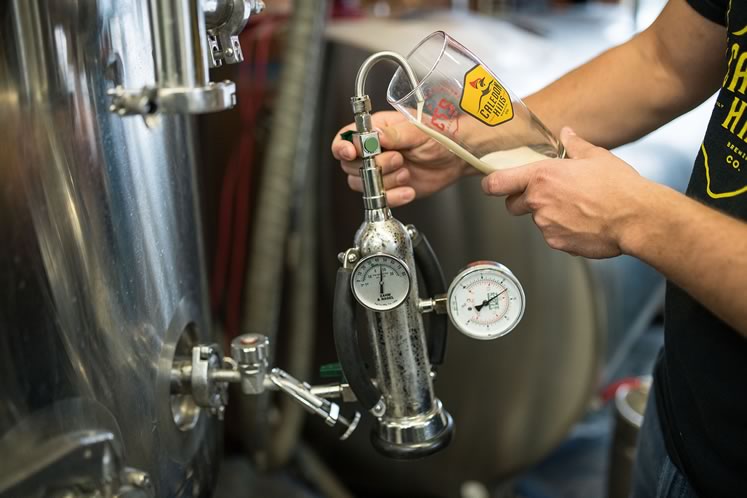 Sebastian draws some product for testing. Photo by James MacDonald.

The Riedelsheimers have lived in Palgrave for more than 20 years and Stefan and Sebastian say their growing success is directly linked to local boosters. Nick Sutcliffe of Pommies Cider Co. in Caledon offered advice on how to navigate getting into the LCBO, for one. And Terry Cutts, owner of The Church pub in Palgrave, signed on as a customer before he’d even tasted the beer.

Stefan admits Terry’s face was a little tense when he took his first sip. But “he drank it and started smiling,” says Stefan. “He said, ‘You’re our neighbour and our friend. What if it was terrible?’” It wasn’t. And sales have been climbing ever since at the LCBO, The Beer Store and about 50 local restaurants. Kegs and cans are also available, by appointment only, from the brewery. “People love our beer and love that it’s local,” says Sebastian.