At Home with Deborah Shortill of Hannah’s

How the retail maven and her husband, Morley, nestled their new dream home into the rolling Mono landscape.

Deborah Shortill recalls the excitement she felt back in 2017 when she first saw the Mono property she and her husband, Morley, now own. Standing at its northern border, they looked south, then turned to each other filled with cautious enthusiasm. “Is this it?” they asked. The pair had been looking for five years – and now they agreed, “Yes! This could be home.” 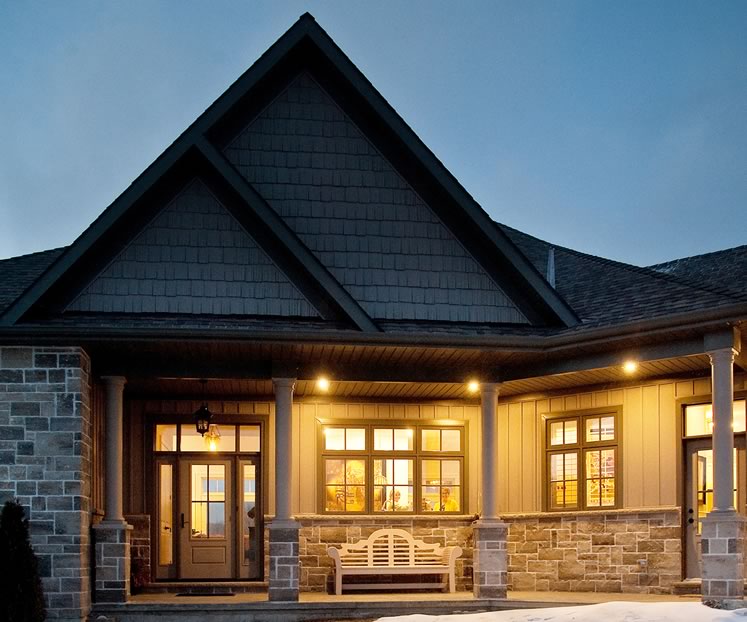 The entrance to the Shortills’ cozy new home on a chilly winter night. The house was built by Orangeville’s Dalerose Homes. Photo by Rosemary Hasner / Black Dog Creative Arts. 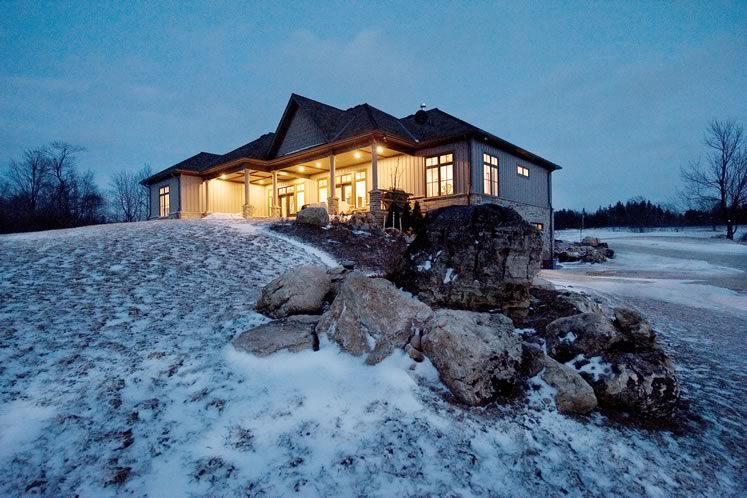 The home glows from within in this rear view of the outdoor entertaining area. Photo by Rosemary Hasner / Black Dog Creative Arts.

Two years later, the couple of more than 30 years – she a busy clothing retailer and he a retired owner of an excavation company – live in a custom-built country bungalow set into the nearly 23-acre property. Morley carved a gently curving laneway and other contours out of the landscape they’ve dubbed Hilltopper Hollow.

Armed with a wish list and Deb’s magazine tear sheets, the pair had consulted with Erin builder Mary Lawson of Dalerose Homes to create a stylish country home with all the creature comforts the couple wanted. The only challenge was to downsize from the footprint of their former home in Hillsburgh, which was about 5,400 square feet. Of the final 2,800-square-foot home, Mary says, “It’s settled into the valley like it’s been there forever. It’s so pretty from the road.”

Inside, the home is centred on a great room flanked by the den, principal bedroom and bath at one end, and two guest rooms, a bathroom and mudroom at the other. Porches cover the entrance on the south side of the building and an outdoor dining and entertaining area to the north. 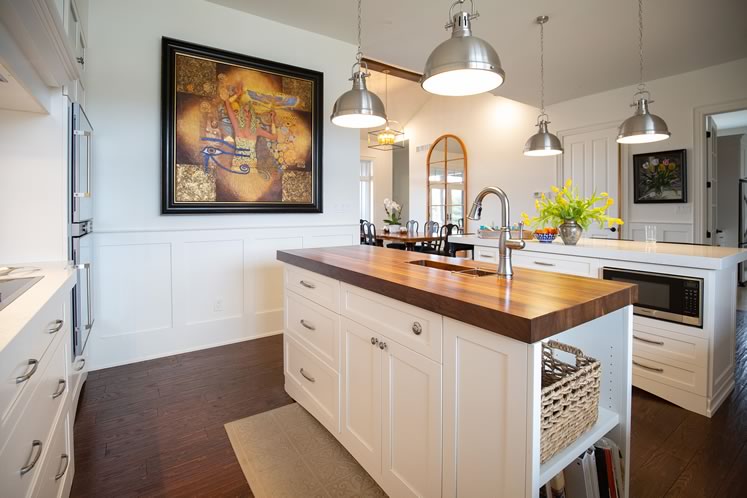 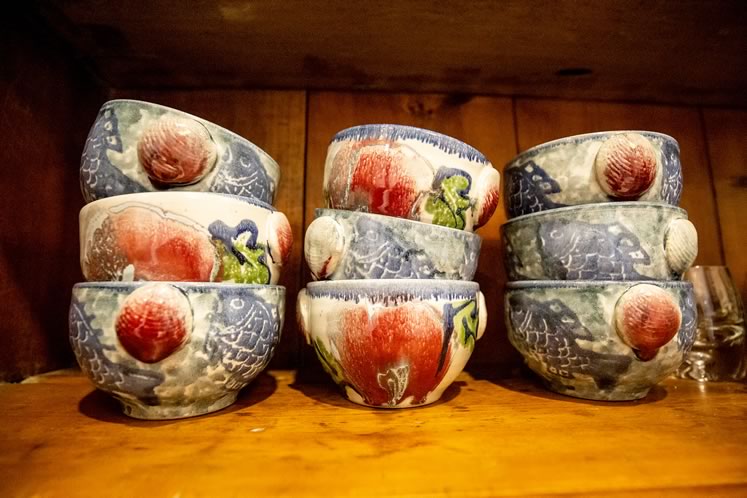 A collection of soup bowls sits in an antique butternut cabinet on the wall of the mudroom. Photo by Erin Fitzgibbon. 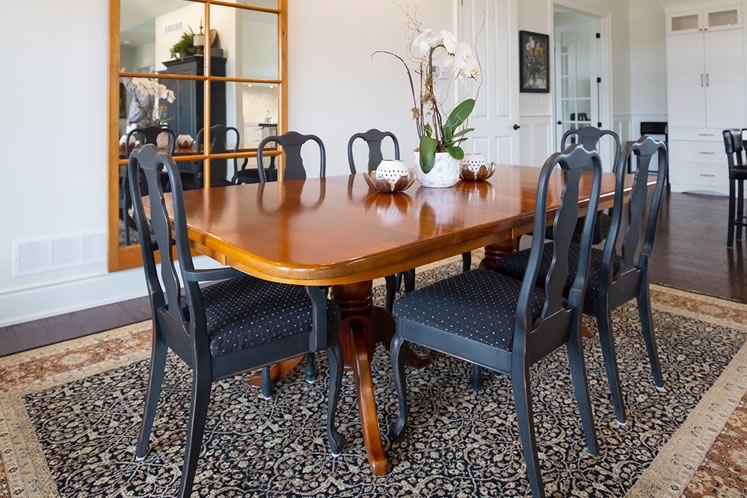 The wood-framed mirror is a replica of one in Hannah’s, Deb’s clothing shop in Erin. Photo by Erin Fitzgibbon.

As the construction progressed, the couple made one crucial tweak to the design. The original plans showed the kitchen completely open to the great room, but in discussion with Carol Postar of Kinnettles Interiors in Kincardine, who was designing the kitchen, the Shortills realized they did, in fact, want a partial partition. On the kitchen side, one of their favourite paintings, Alton-based painter Paul Morin’s bright, bold “Fountain of Innocence,” now dominates the wall.

“I’m so glad we added the wall. It is a great place for art, but it’s also a good separation,” says Deb. “It still feels open, but we can leave and not see the dishes.”

Another kitchen top note is the two-island layout. The couple love to entertain, but in their previous home Deb often found the island’s inevitable role as party social hub eclipsed its role as a place to prep and cook. In the new kitchen, while the guests gather around one island, Deb can claim the wood-topped surface of the other one for herself. She refers to it as her “private island.” It’s not quite Mustique or Necker Island, but it delights her as much as any Caribbean isle could.

When it came to paint colours, Deb was certain she wanted to lighten up her previous earthy palette. An off-white (Benjamin Moore’s Swiss Coffee) renders the kitchen and great room light and bright. And the decision to forgo curtains on the plentiful windows and French doors adds to the effect. “In my store I live in so much colour,” Deb says. “I need my home to feel relaxing.”

One unplanned benefit to the palette change is the way it throws the Shortills’ art collection into greater relief. For one, the Morin in the kitchen “works so well in the new setting.” 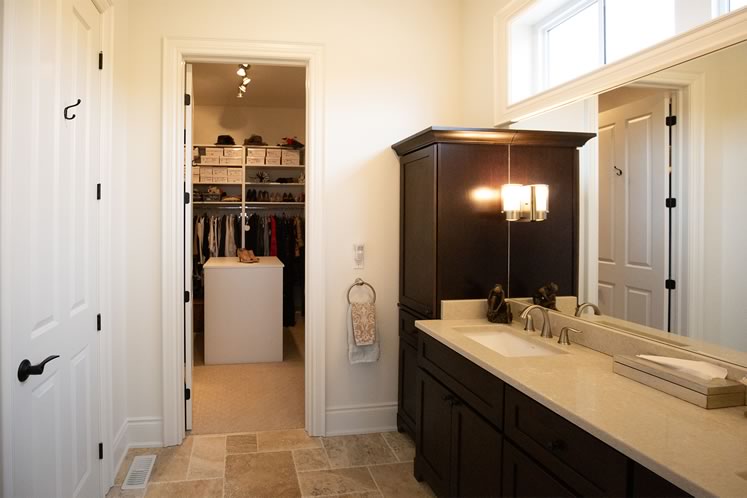 A view of the closet from the ensuite bathroom. Photo by Erin Fitzgibbon. 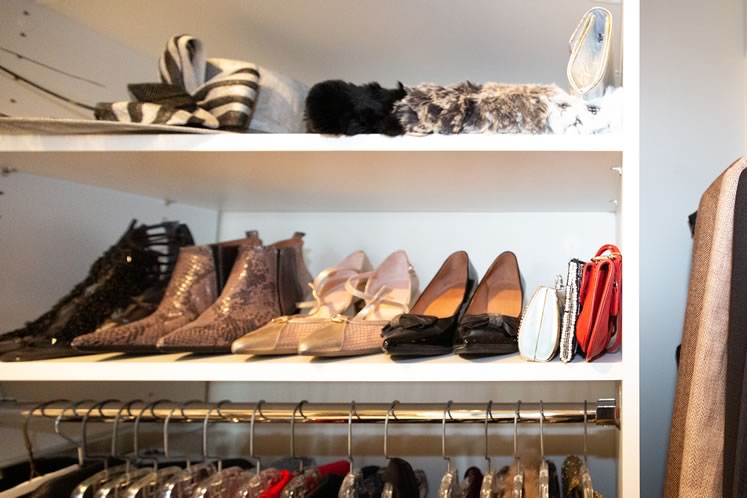 Every corner of Deb’s walk-in closet is a reminder of her skill at fashion merchandising. Photo by Erin Fitzgibbon. 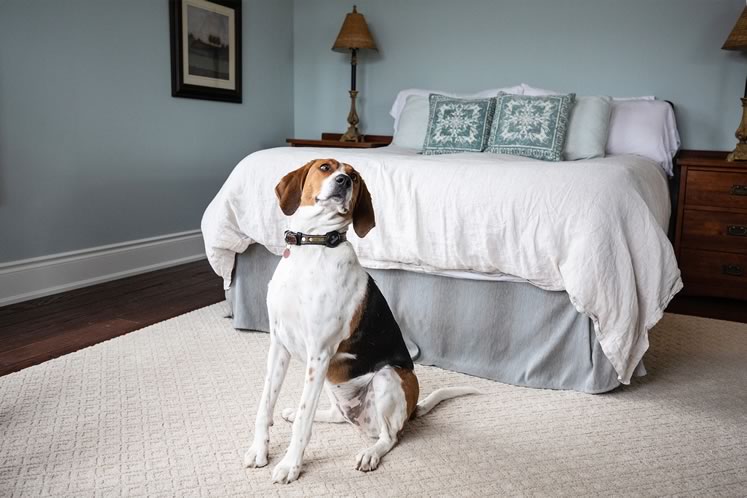 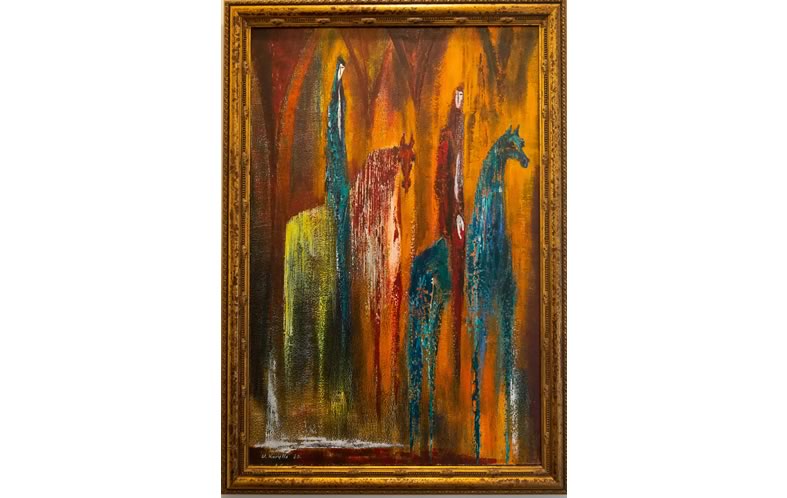 Witold Kuryllowicz’s vibrant painting of cavalry horses hangs on a wall outside the principal bedroom. Photo by Erin Fitzgibbon. 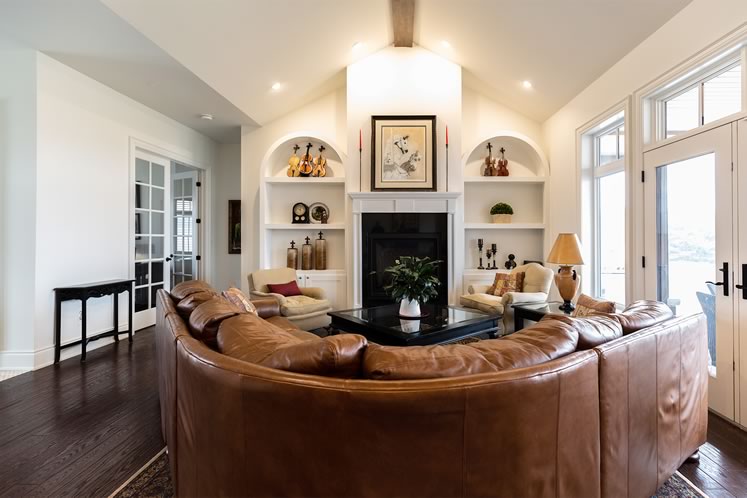 Thoughtful placements are a specialty of Deb’s. As the owner of Hannah’s, the venerable women’s and men’s clothing shop in Erin, Deb has mastered the art of product placement that nudges customers to consider pieces that add up to more than the sum of their parts. When she’s dressing a client, she says, if they leave the change room feeling like they’re wearing a costume, it is a costume. When they say an outfit “feels like me,” then Deb knows she’s nailed it. Likewise, her goal wasn’t to create anyone else’s idea of the perfect home. “It is similar to merchandising the store; you don’t want anything jarring. Paintings or pieces can pop out but in a pleasing fashion. And whether it’s clothing or décor, classics will always prevail.”

In the kitchen a tulip canvas by Barbara Bolger echoes a vase of Deb’s favourite flowers on the counter. In the great room, a long wall is ideal for showcasing a large pair of night-sky-blue abstracts by Jillson Evans-Roland. Another beloved piece, a deep red and orange painting depicting abstract cavalry horses by Witold Kuryllowicz, sits outside the principal bedroom.

Among the few new items purchased after the move are two striking modern-meets-vintage chandeliers from Toronto’s Union Lighting that unite the room’s living and dining zones. Other collectibles reinforce the story of the couple’s passions. Five vintage violins stand in the arched shelves in front of a curved, caramel leather couch in the living area. Three were made by Morley’s grandfather. “I was five or six when I watched him build them,” he says. In the centre of the room sits a glossy black Knabe piano, likely built in the 1920s by the Baltimore-based company. When they purchased it for their previous home, Morley recalls, “it needed a lot of work.” 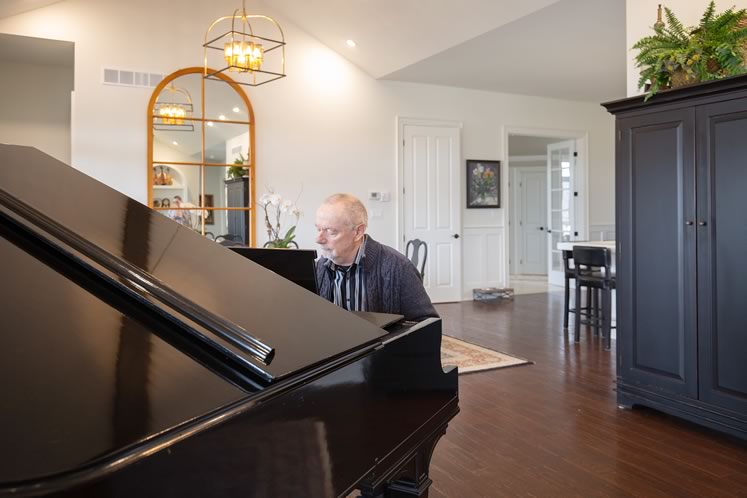 Morley admits that as a boy he would rather have been playing soccer with his friends, but being forced to take piano lessons has paid dividends. Today the iPad has replaced sheet music for songs he doesn’t know by heart, but Morley stays in tune by playing for Deb and jamming regularly with friends in Erin. On my visit, he slid onto the bench and played Van Morrison’s Have I Told You Lately, which filled the house while Deb led me on a tour. “The piano really comes alive here,” she says.

In addition to music, riding is another activity built into the new home base. The barn was finished in early 2019 by Orangeville-based Canadian Outbuildings. Deb has been mad for horses since she was eight. She picked up lessons again after the couple’s four children were grown. “I have not a lot of talent, but a lot of passion,” she says. 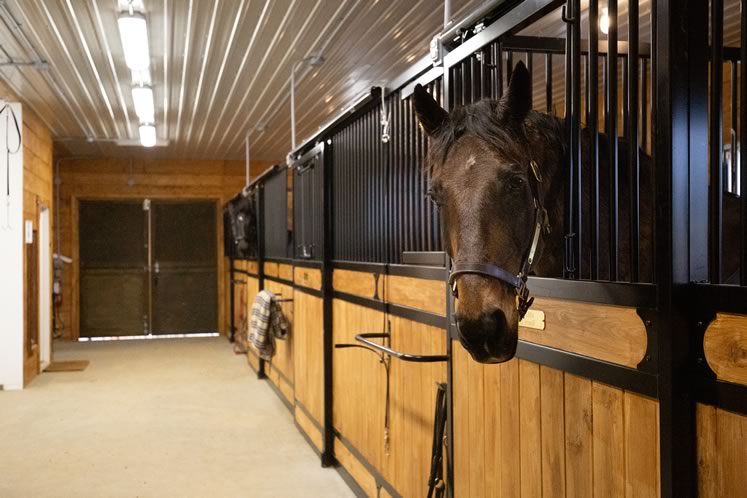 Deb’s horse Rhubin looks out from his stall. The barn was built by Orangeville’s Canadian Outbuildings. Photo by Erin Fitzgibbon. 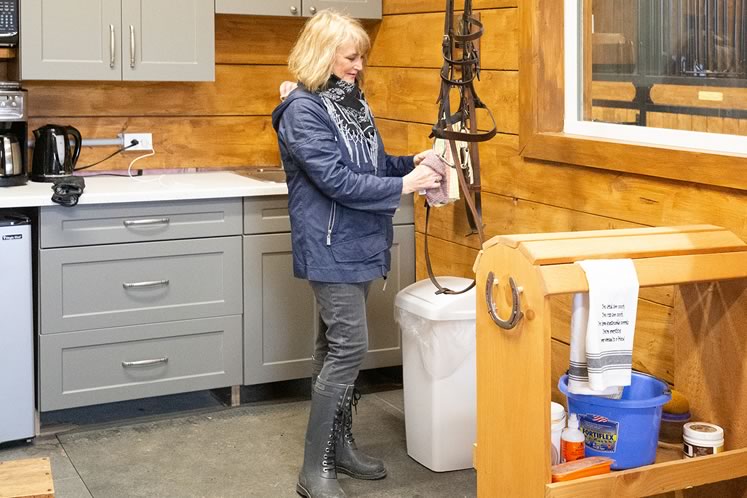 As they look ahead to the holiday season, their second here, Deb and Morley are primed for as many of their children and their families (there are five grandkids) to come home as can – from as far away as Thailand. Two guest bedrooms on the main floor and one in the basement are ready to be pressed into service.

Until then, the two are still pinching themselves that they get to enjoy this gift to each other year-round. “It feels like home. It never ceases to thrill us.” 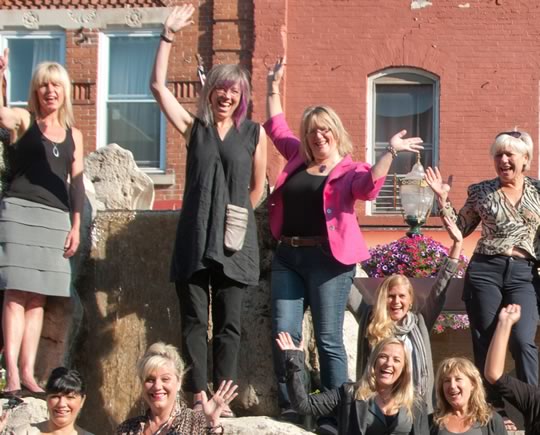 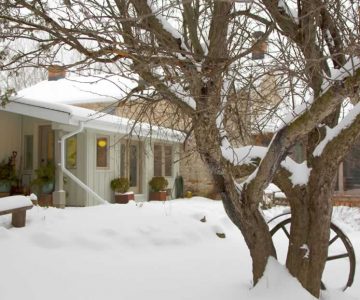 Saying farewell to a beloved home is never easy. 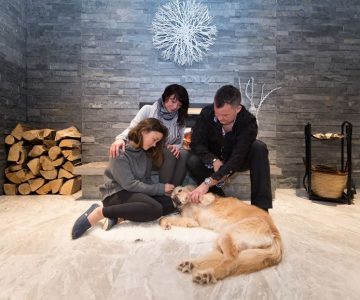 Local retailer Miyeko Simons is guided by her signature pared-down style at home, especially over the holidays.