The grand Victorian exterior of Sandy and Peter Reeves’ Hillsburgh farmhouse has changed little since it was built in 1876. Its tall, double-paned front doors, matching bay windows and graceful side porch still open onto gently sloped lawns. The Coningsby branch of the Women’s Institute was founded here in 1906, and it’s easy to picture members meeting for charity work, quilting bees and summer garden parties. As time went by, when the women met, their husbands convened on the porch to listen to CBC, the new national radio station. The men would often compile a report of their analysis of the news and send it along to the broadcaster. 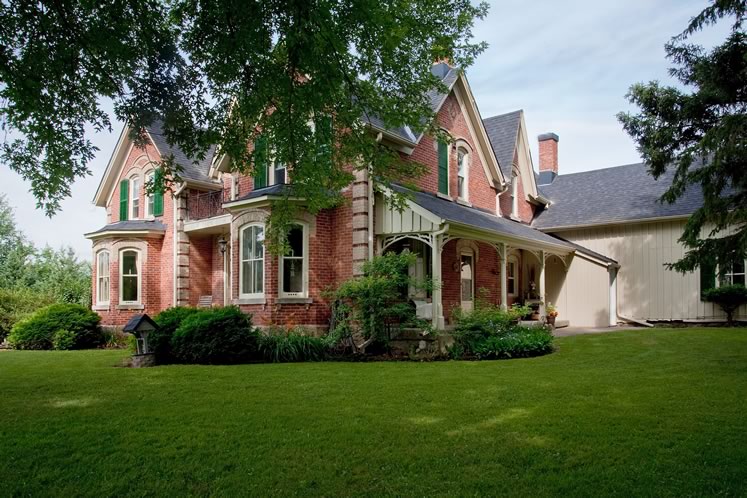 The grand Victorian exterior of Sandy and Peter Reeves’ Hillsburgh farmhouse has changed little since it was built in 1876. Photo by Rosemary Hasner / Black Dog Creative Arts.

Sandy and Peter have been gleeful keepers of these and other intriguing historical details since they bought the home in 2016, curating a small gallery of vintage photos and documents in their black and gold panelled foyer. But they’ve also added an entirely contemporary twist to the character of the property. The women (and men) who mill about the property today are clad in relaxed exercise gear, ready to stretch it out in the new eco-friendly Pilates studio. The couple built the studio in 2017 to house Sandy’s growing business, Pond Side Pilates.

“It’s the same as it was in the past – it was and is a meeting place. I just love sharing this property,” says Sandy. “People enjoy the serenity here. Nature is such a good healer.” 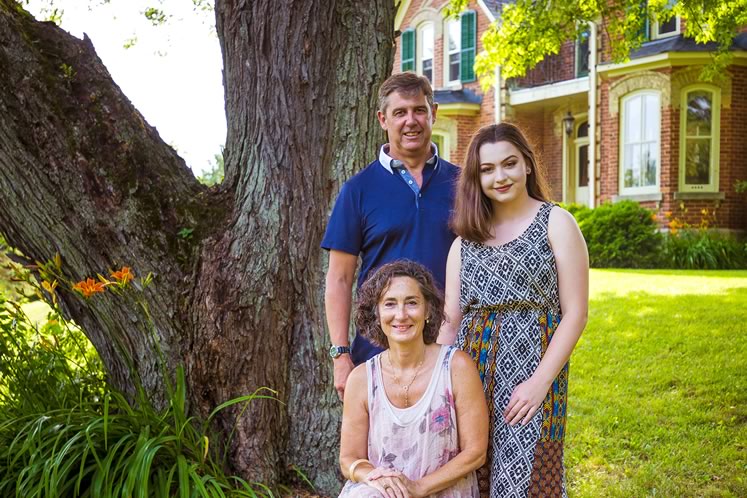 Sandy and Peter Reeves with Olivia, one of their daughters. The family moved to this grand Victorian farmhouse in 2016. Photo by Erin Fitzgibbon.

The Reeves and their two daughters moved across the pond from England in 2007 when Peter, a software engineer, accepted a job with Research in Motion in Waterloo, Ontario. After settling in Bright, near Woodstock, the Hampshire natives craved living near water and began searching for a new home. This property’s two ponds, created in 1973, fit the bill. One is 16 feet deep for swimming and fishing, the other features a small island complete with a church steeple folly.

The clincher was the feeling of home that washed over them when they first stepped onto the home’s creaky floorboards. “As soon as I walked through these doors, I felt like I was in England,” Sandy recalls of those floors, the formal layout and the deep-set front windows. “I no longer felt like an Englishman abroad. We had found our little piece of England here. And I could see where all my old English furniture would go.” 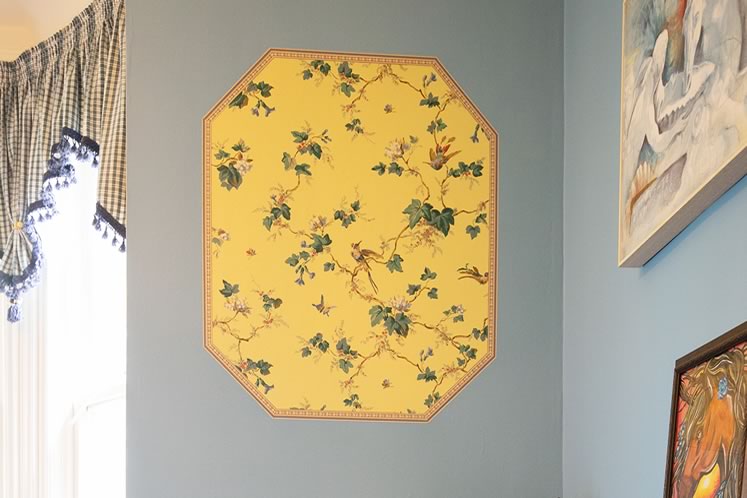 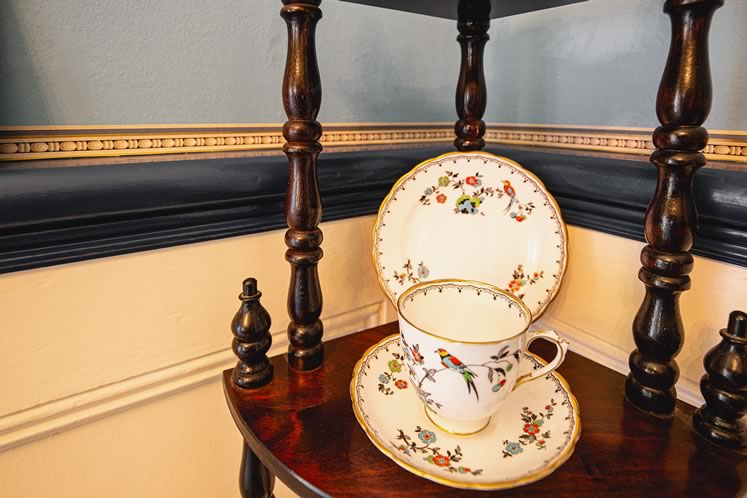 Fragments of the previous owners’ wallpaper have been preserved. The pattern is almost identical to a tea set displayed nearby. Photo by Erin Fitzgibbon.

And there was another good sign. Although the creamy yellow wallpaper in the formal dining room was peeling and damaged, the bird and branch pattern was nearly identical to an heirloom tea set Sandy treasured. Before painting the room blue, Sandy saved two panels of wallpaper flanking a bay window and framed them with moulding. The tea set sits nearby, ready for the tale.

Other thoughtful moments, populated by historical and personal mementos, sit around each corner. One commemorates Sandy’s dance background, with porcelain ballerinas next to her grandfather’s 1920s and ’30s officers’ mess dance cards. A china shelf features a jolly King George teacup. And the upstairs landing is home to Sandy’s collection of whimsical fairy figurines. 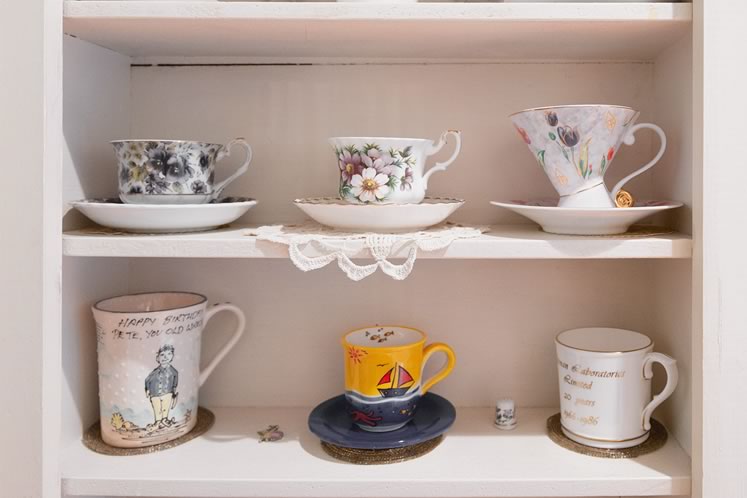 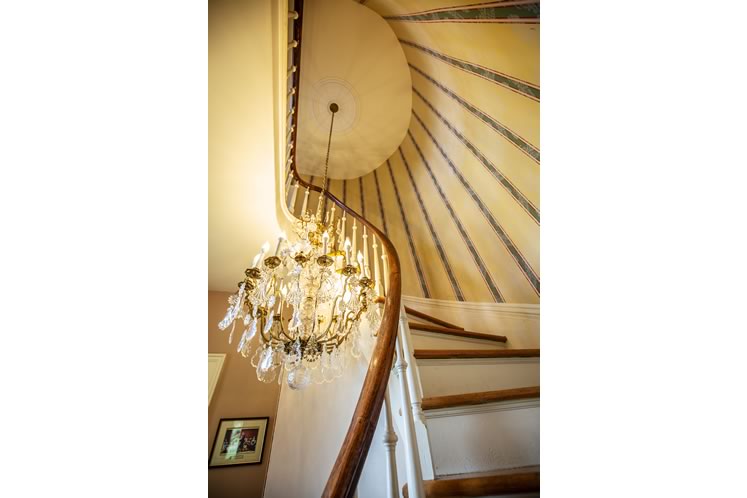 But hands down, the show-stopping collectible here is the giant Baccarat crystal chandelier. It hangs above the elegantly curved staircase that rises in the centre hall facing the formal front doors. The Reeves added the stunner after moving in – and after its sellers, Beaver Mills Design in Erin, conducted a site visit to make sure it had a secure ceiling attachment. The Reeves were told the chandelier, made of handcrafted glass, crystal ornaments and brass rosettes, was one of only two ever made. The other reportedly hung in designer Yves Saint Laurent’s New York City penthouse. 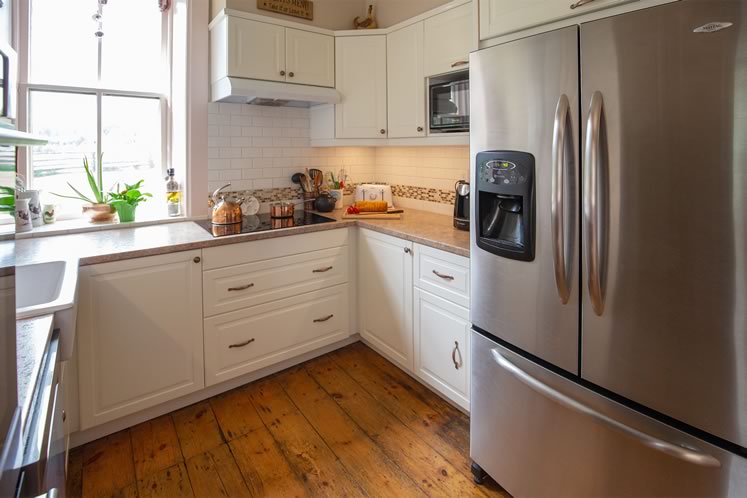 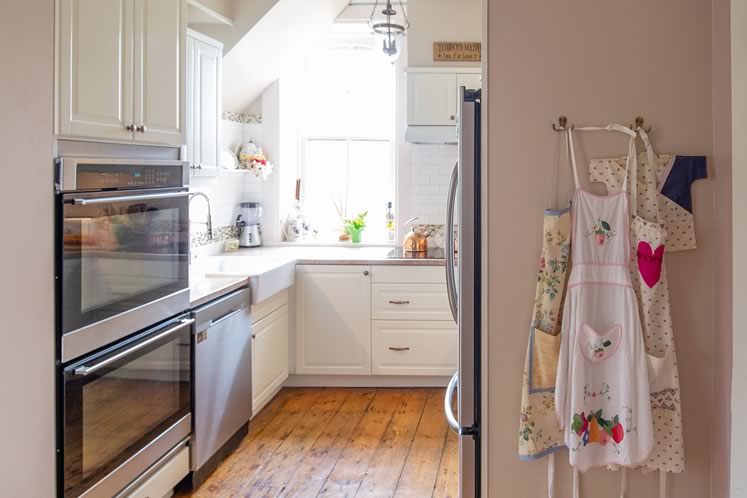 The country kitchen where Sandy loves to bake is painted a soft pink. Photo by Erin Fitzgibbon.

Away from the glitz, the kitchen is the true centre of the house. Designed to recall an English tea room, its wide wooden floors, large centre island and soft pink walls are where Sandy follows her passion for baking under the watchful eye of Mango, the yellow rescue budgie. Today it’s going to be a rhubarb pie.

“I love old-fashioned baking,” Sandy says. Her favourites include proper English scones, rosewater-tinged rice pudding (served hot, the English way, thank you very much) and her take on a Victoria sandwich, a traditional sponge cake with jam and cream. 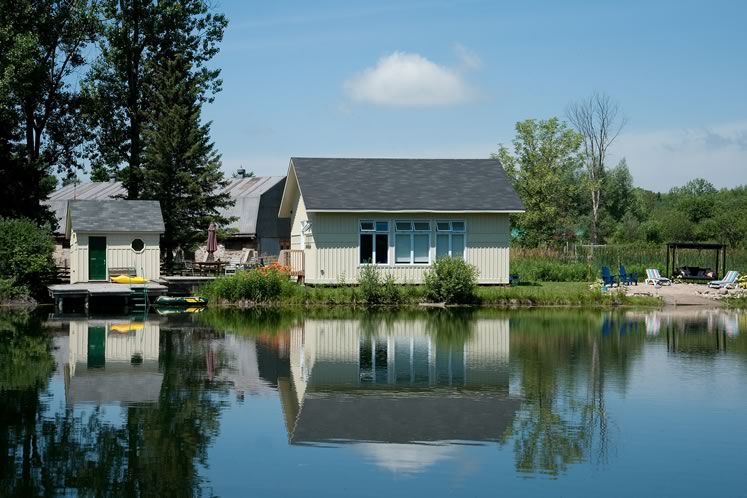 Sandy’s Pond Side Pilates studio was built in 2017 at the edge of one of the property’s two ponds. Photo by Rosemary Hasner / Black Dog Creative Arts.

Tea-room Sandy is a definite contrast to the thoroughly modern instructor who presides over the Pilates studio, a short walk from the house. With a background in dance and ballet – and a short detour into teaching the Jane Fonda workout method in the 1980s – Sandy embraced her current practice after a spinal cord injury left her unable to walk 20 years ago. After she had spinal fusion surgery, her rehab physiotherapists introduced her to Pilates, which uses small, precise exercises to strengthen and realign the muscles of the body.

“My recovery was quite lengthy, but with patience, physiotherapy and Pilates, I began to regain my normal ability to move,” she says. “In the process I fell in love with Pilates and its powerful ability to improve and correct one’s movements.”

The studio was built by Barrie-based barn craftsmen Dutch Masters, who had previously restored a small barn on the property. The roughly 700-square-foot studio sits on helical piles so as not to disturb the landscape. The airy, one-room space is filled with mats and workout balls in shades of blue and pale green, and looks out over the deeper of the two ponds as an ultra-Zen focal point. “It has the feel and the serenity and the calmness,” Sandy says of the genius location. 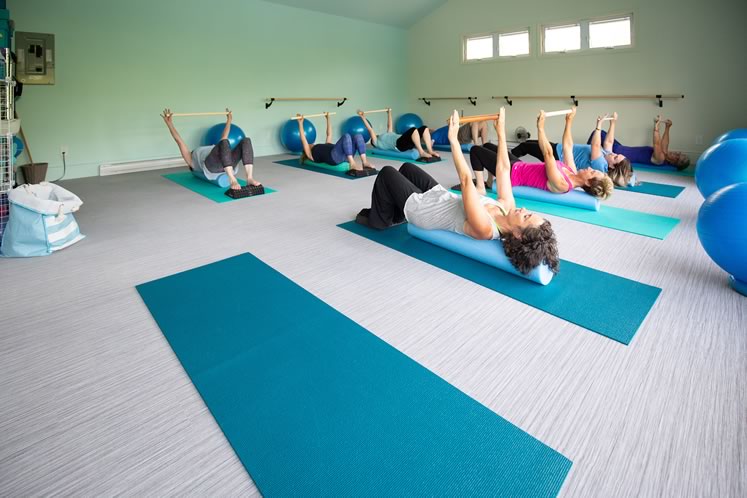 Sandy leads a class in the airy, modern studio. Photo by Erin Fitzgibbon.

However, the calm is occasionally broken by visiting kingfishers and herons that sweep by and set her class atwitter. One day, three herons landed on the pond as if to check out the goings-on. “I had to say, ‘Let’s focus,’” says Sandy, recalling the day. “But it did add a fun element.”

Her clients – most of whom are nearby neighbours, many of them professional riders – come to soothe their own aches and pains. As one regular put it on a recent visit, “We do all this work on horses but not on ourselves. It’s amazing how much better Sandy makes us feel.” 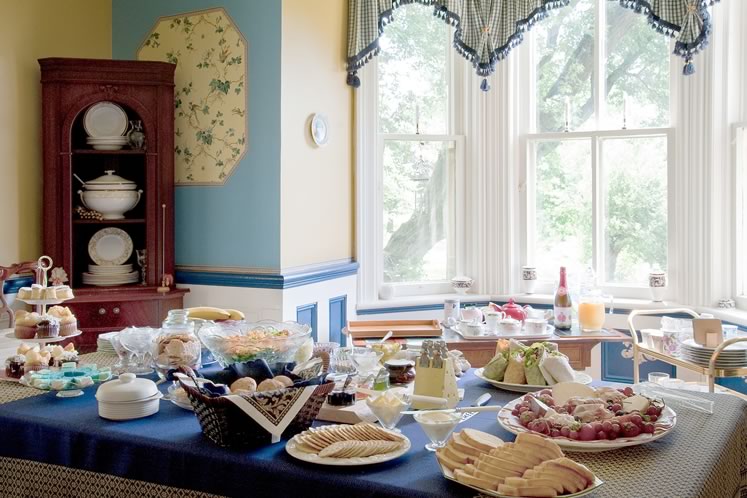 In addition to weekly classes, Sandy offers full-day retreats, with food supplied by Erin’s Mejores Foods and Holtom’s Bakery. Participants also jump at the chance to take a sauna, swim in the pond and walk the property. In the winter Sandy adds snowshoeing to the mindful mix. As she shares her vision, she offers favourite tenets of founder Joseph Pilates. One is “You are as old as your spine is flexible.” Another, “Change happens through movement and movement heals.”

The latter idea helps explain both her own and her clients’ improved health, but it also captures the broader effect of a family finding a balm for their expatriate souls. As Sandy builds her practice, Peter continues to commute to Waterloo, but now to young tech company Riot Micro. Artist daughter Hayley, 28, lives in London, Ontario, and 21-year-old show jumper Olivia, who was home for the summer, has returned to her studies in neuroscience at the University of Toronto.

“It’s all working. I am at home and happy in Canada,” says Sandy. 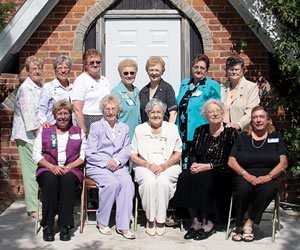 Women’s Institute: For Home and Country

The Women’s Institute has been called the most effective women’s organization ever – with good reason. For over a century, the WI has been welcoming, educating, challenging, improving, supporting and “getting things done.” 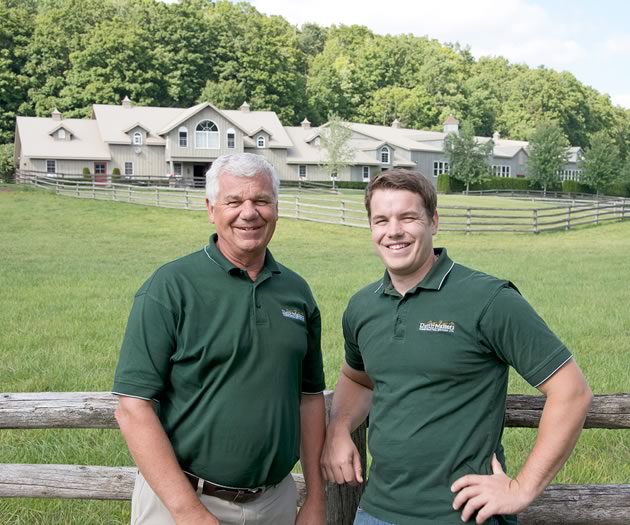 Gary van Bolderen carved out an exceptional niche in the equestrian business. Now his son is taking over the reins – and Gary couldn’t be happier. 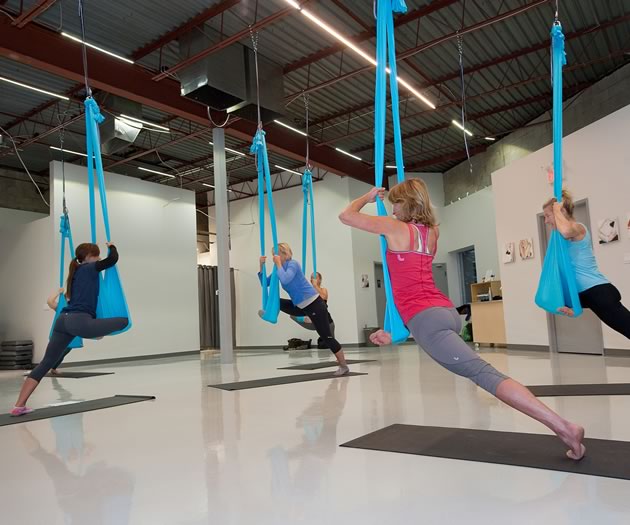 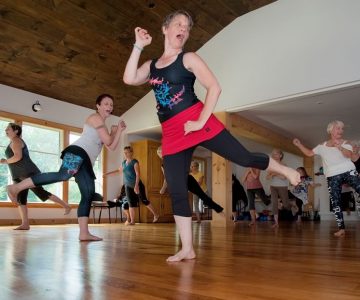 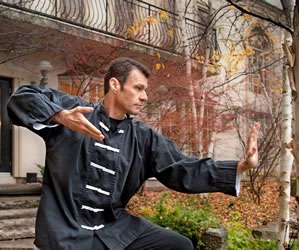 Zumba – Party Your Way to Fitness

Get off the treadmill and join the Zumba craze!