Thank goodness the dog ran away. Without the puppy’s flight to greet a city neighbour’s kids, the Caledon farmhouse formerly known as Hilly Haven might have got away from Mark and Judy McLean … again.

The now retired Toronto couple had tried to buy the property in 2008, after seeing it across the road from the home once owned by Mark’s aunt. But the property was taken off the market. Then, in 2011, Oscar the pup made his break – with serendipitous results. When Judy dashed to retrieve him, she got chatting with the neighbour, who had also been interested in Hilly Haven and knew that it had just been listed again. Mark and Judy sprang into action, and the property at Innis Lake Road and Finnerty Sideroad started a new chapter in its long history. 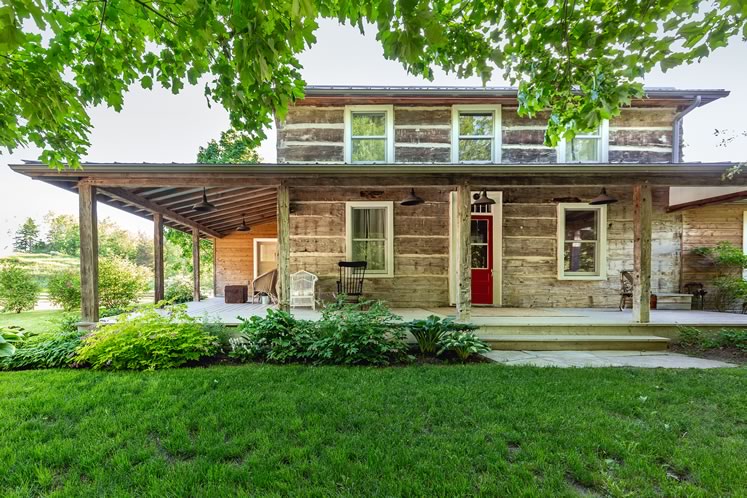 A family finds both continuity with the past and dreams fulfilled in a historic log house in Caledon. Photo by Erin Fitzgibbon.

The home’s history began when James Killeen, owner of the tavern in Sleswick, a hamlet at what is now the intersection of Finnerty and Airport Road, built the two-storey log house at the heart of the property. Killeen came to the area in 1821, but the date the house was built is unknown. The property passed to Michael Finnerty in 1864. In the 1970s, more recent owners put in a new foundation with a full basement. They also transformed the original kitchen in the south gable end of the house into a living room.

By the time Mark and Judy took ownership, the exterior of the house was clad with white cement board that obscured the logs, save for one tantalizing corner. Could the logs be restored? Clearly there was a lot of history, love and potential bound up in the log farmhouse, and Mark and Judy were keen to begin working on their weekend home.

Equally excited were their daughter, Chelsea Hulme, a former film and line producer, and her husband, Cory Wilyman, a director of photography, who recently opened the Cardinal Gallery in Toronto. After the real estate deal closed in August, the “committee of four” began the year-long restoration, joined in their enthusiasm by Chelsea and Cory’s daughter, Juliet, who was 11 at the time. 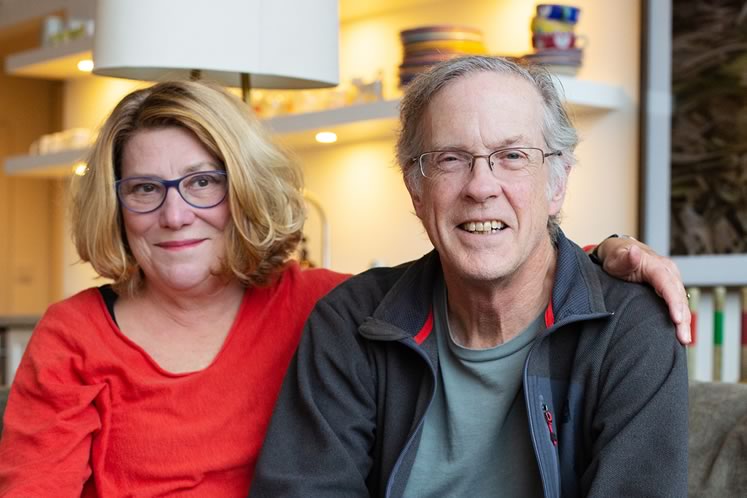 When Mark and Judy McLean bought their Caledon weekend home in 2011, only a tantalizing peek of its log construction was visible. Photo by Erin Fitzgibbon. 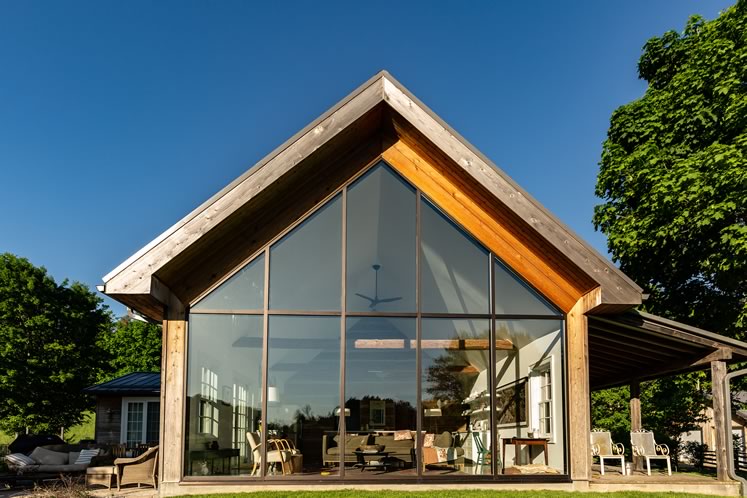 A view from outside the new addition shows an impressive glass wall rising to meet the peaked roofline. Photo by Erin Fitzgibbon. 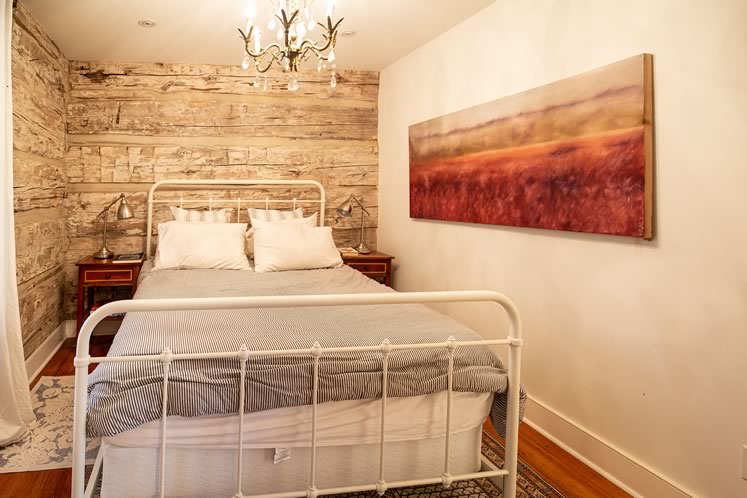 One of the rustic-yet-modern bedrooms is tucked against original logs. Photo by Erin Fitzgibbon. 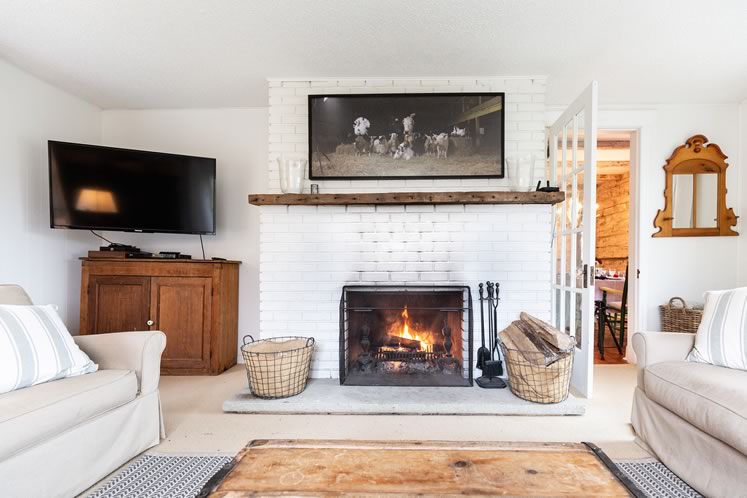 Among the first moves the family made after buying the house was to paint all interior walls, excluding logs, with Benjamin Moore’s Cloud White. Photo by Erin Fitzgibbon. 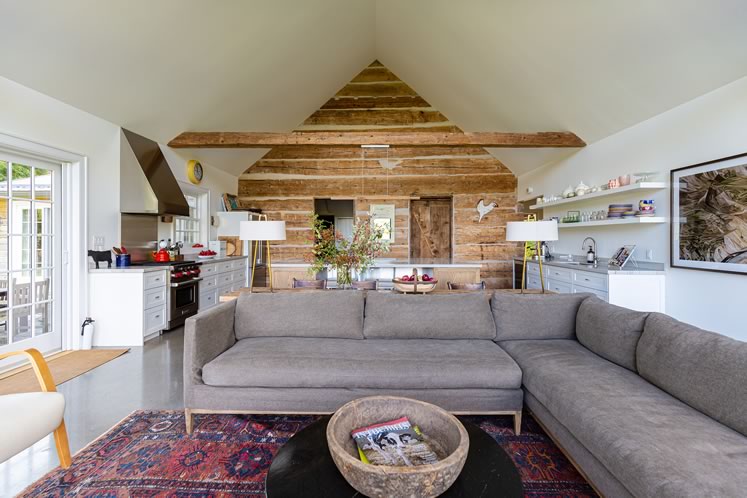 A comfortable living area is oriented toward the long vista stretching beyond the glass wall. Photo by Erin Fitzgibbon. 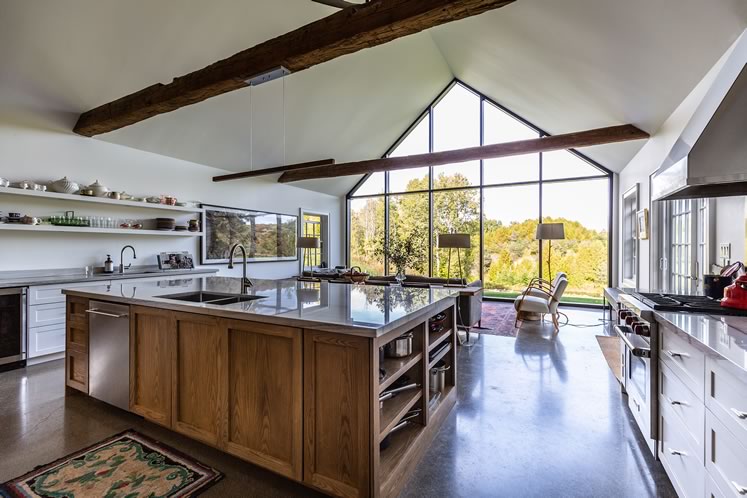 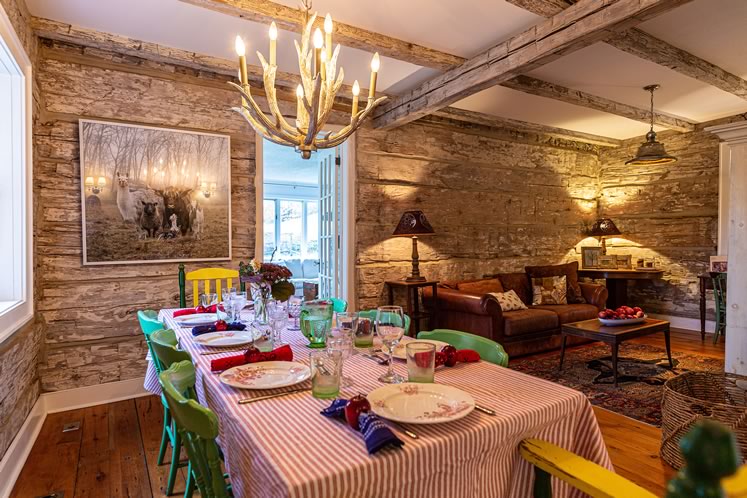 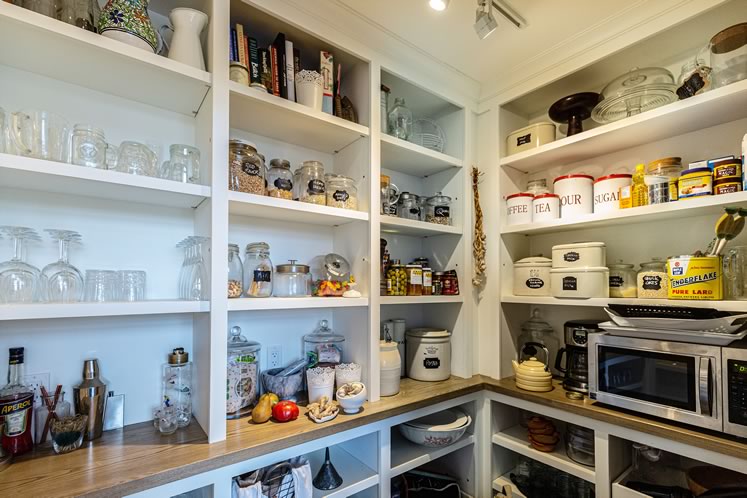 Removing the exterior cladding, as well as the interior fake wood panelling that had damaged the underlying lath and plaster walls, revealed a hoped-for discovery – 18-inch square-cut logs that had been hewn from hemlocks on the property. Cory cleaned and rechinked the logs, and this loving treatment, along with some white flecks remaining from the plaster, resulted in a beautiful patina.

Chelsea chose Benjamin Moore’s Cloud White to paint everything inside, save for the exposed logs. The original wide-plank pine floors were refinished. New attic insulation, windows, bathroom and metal roof followed. But there were some mishaps along the way. Judy recalls that 13 delivery trucks took a dip in the seasonal pond out front before the driveway was rebuilt to prevent such adventures.

In 2015, new inspiration struck, sparked by an architectural design featured in Dwell magazine. The result is a new addition facing east. The cathedral ceiling and a glass wall that soars to the ceiling’s peak create a seamless transition between the cozy interior and the outdoor vista of a spring-fed pond and the fields beyond.

The decidedly contemporary look of the addition complements rather than clashes with the traditional farmhouse. The airy open-concept space includes a new kitchen with a large island and quartz countertops, as well as a living room with a polished concrete floor that provides ambient heat. A new beloved paint colour, Benjamin Moore’s Simply White, graces the walls.

Robert Radonicich of Craftsmen Builders served as the addition’s general contractor and carpenter. Fletcher Patriquin, a friend of Cory’s, took on the custom cabinetry, including the new pantry. Viki Mansell, of Toronto interior design company Absolutely Inc., designed the kitchen, pantry, mudroom and ground-floor bathroom, all part of the new addition. Viki also sourced Mark’s favourite piece in the house – a painter’s trestle table 11 feet long by 21 inches wide. “Its rustic surface and outsized proportions work perfectly in the big room,” says Mark. Canadian pine furniture and a few Persian rugs round out the furnishings.

The work spilled outside. Mark worked with Ontario Streams, a nonprofit group that focuses on rehabilitating the province’s streams, rivers and wetlands, to separate the pond from one of the streams that run through the property. Diverting the stream around the pond was designed to help prevent warming and provide a friendlier habitat for cold-water fish.

In winter, Cory and Chelsea enjoy using the pond as a skating rink – it’s where Juliet learned to skate and play hockey – and in summer, for swimming on hot days. It’s a peaceful compromise, as conservationist Mark had stridently voiced disapproval of installing a pool. The words “over my dead body” may have been uttered. 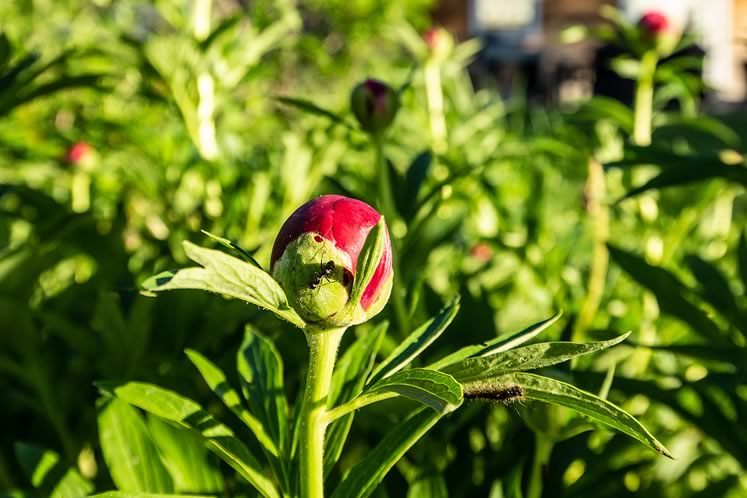 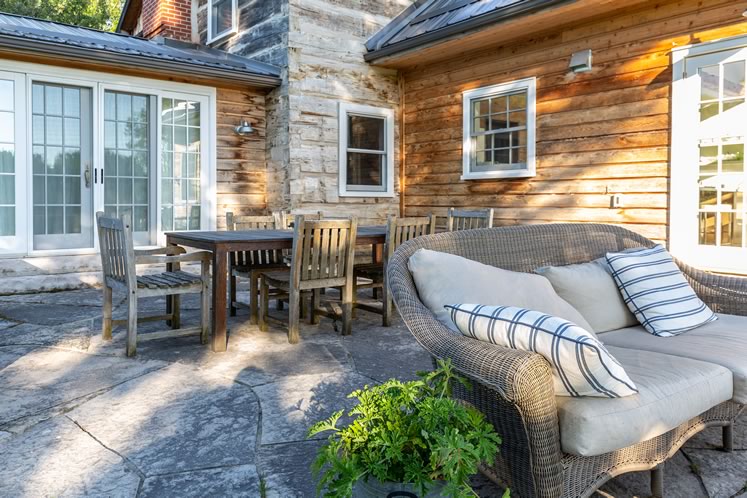 In the summer, the McLeans’ living space expands to include dining and seating areas on a stone deck. Photo by Erin Fitzgibbon. 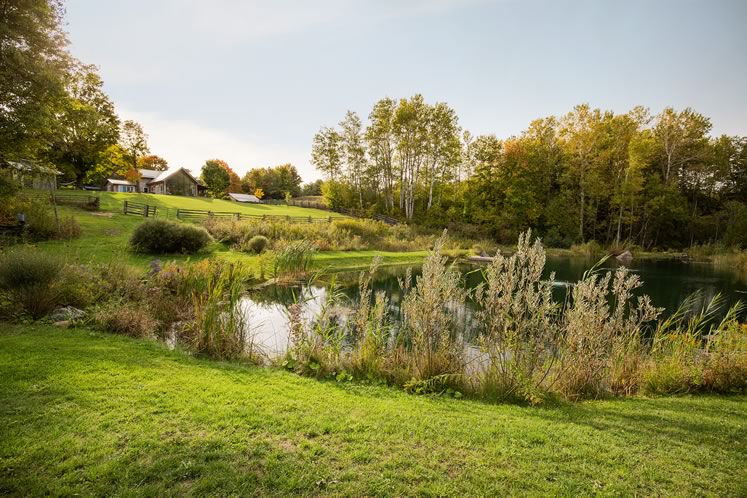 The property’s pond and nearby streams were part of a wetlands rehabilitation project aimed at improving the habitat for cold-water fish. Photo by Erin Fitzgibbon. 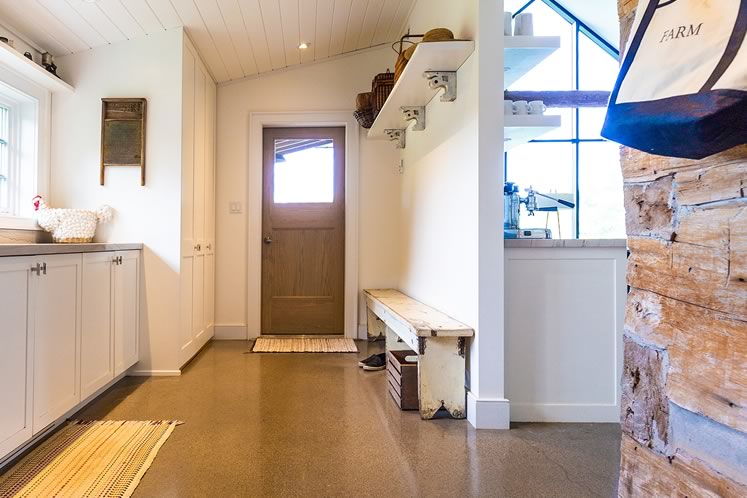 A sleek mudroom area off to the side of the new kitchen. Photo by Erin Fitzgibbon. 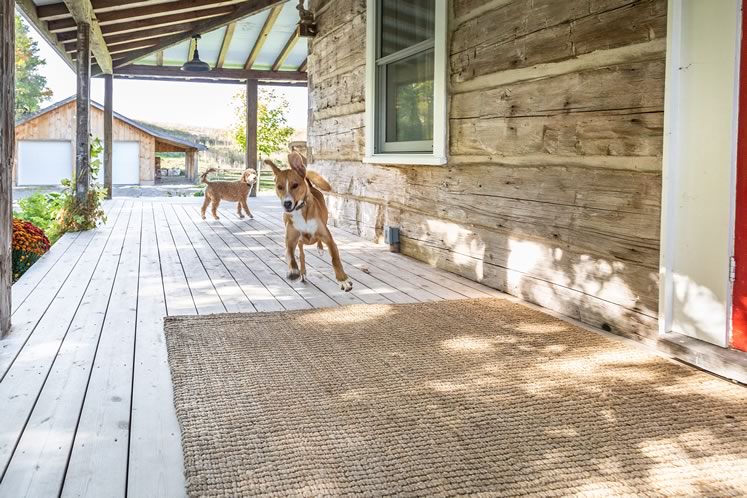 In time, the two families plan to rename the property to reflect how it fulfills the dreams of each of its occupants. Chelsea has been able to express a decorating style that embodies a sense of whimsy. A collection of quilts and hand-hooked rugs is just one of her contributions.

Cory and Chelsea have also been able to indulge in hobbies not suited to Toronto life. On learning the property’s history of producing applejack from its many apple trees, the couple set about resurrecting the cider shack – with mixed results, but a desire to keep trying. The driveshed was also renovated to serve as a games room, featuring a Ping Pong table and a wood stove. A lean-to serves as a painting studio for Judy, though it is not without its limitations. “It’s only serviceable for four months of the year,” she laughs. “Too hot in summer and too cold in winter.”

For Judy there’s a nostalgic comfort in the historic house and grounds. Her mother grew up on a wheat farm in Saskatchewan, and Judy always yearned for the warmth and coziness of a farmhouse, qualities she has recreated in abundance. The sitting porch is a favourite, but Judy is most enamoured of the vegetable garden, which she rehabilitated with the help of her great-nephew Morgan Whittall. Now planted and maintained by Mark Gorski of Gourmet Garden Organics, it provides an abundance of red carrots, turnips and potatoes, which are stored in the root cellar in true farmhouse fashion. Larry Zembal of Humbervalley Honey maintains hives on the property, and Brad Matchett of Rusty Jade Ranch takes hay off the fields. The fertile property shares its bounty with community members.

It is the outdoors that beckons Mark, with trails zigzagging throughout the 60 to 70 acres of forest, perfect for the avid hiker. Judy recalls that the first time they toured the property: Mark found morels growing under an ancient apple tree. That, more than the farmhouse that drew in Judy, sealed the deal for him. It is a love of nature that brings the homestead full circle for Mark, and its location across the road from his aunt Amy Stewart’s former property and his fond childhood memories of her legendary gardens.

In their house with no name, Mark and Judy are quickly putting down more roots than the vegetables in their garden. On March 13 this year, they arrived for a weekend – just as the bottom dropped out of all our lives. When a friend asked to use the McLeans’ Toronto home for a 14-day coronavirus quarantine, Mark and Judy hunkered down in the safe haven of the log farmhouse, complete with the new, blissfully large, pantry and stocked root cellar. And the magnificent view through the glass wall. You could spend a long lockdown lost in that vista.

Far from chafing at the constraints, Mark and Judy loved their time in the safe embrace of their house in the hills, which continues the warm tradition of protecting and providing for its inhabitants. 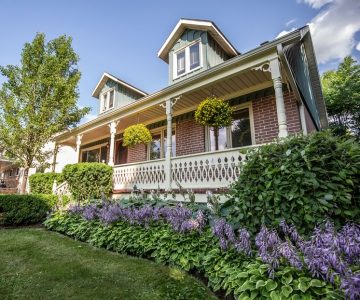 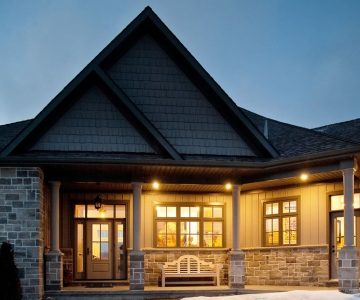 At Home with Deborah Shortill of Hannah’s

How the retail maven and her husband, Morley, nestled their new dream home into the rolling Mono landscape.