Bill Dandie recalls the first time he saw Ketchum House, nestled in a Hockley hillside, with almost equal parts chagrin and shame. “I didn’t see her beauty. I didn’t see her potential – at first,” he confesses of the boxy off-grid home sitting on about four acres of land, a far cry from many of the elegantly manicured country estates in the area. “I was looking through everyone else’s lens and I regret that judgement.” 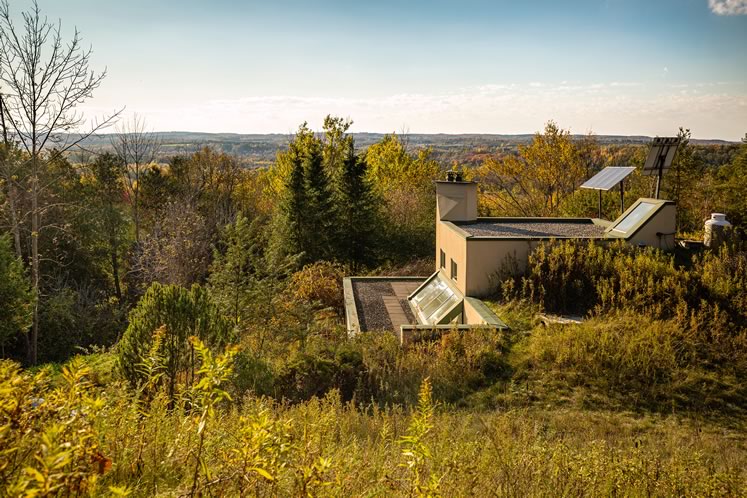 Thank goodness for second chances. After Bill saw Ketchum House – named for its creators and previous owners, Anthony and Mary Ketchum – again with fresh eyes, he didn’t lament the vines growing wild on its walls or all the toil it would take to keep the place in working order. This time he found it tapped into a growing sense of hope he’d started to feel around climate change. He saw the appeal of Ketchum House’s natural look and the pull of its time-honoured sustainability principles. He bought the eco-dwelling in June 2019 after the Ketchums moved to Toronto full time, and when he isn’t occupying it himself, he plans to include it among his Onthe9 Airbnb options (others are a farmhouse with a secluded log cabin at Highway 9 and 4th Line, Mono, and a multi-cottage location on Wolfe Lake in Nipissing). 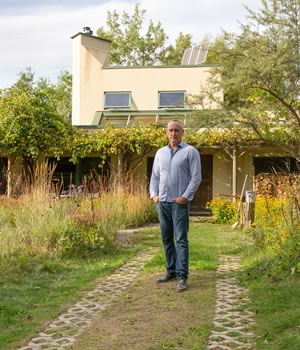 Bill Dandie is the enthusiastic new owner of Ketchum House, an off-the-grid home in Hockley Valley built in 1998. Photo by Erin Fitzgibbon.

With few residential buyers interested in Ketchum House, Bill feared a developer would raze it. Instead, the newly retired telecommunications businessman has begun a great adventure in sustainable living – with all the repairs and troubleshooting that adventure entails. Bill, who was more accustomed to condos than composting toilets (he recently sold his 970-square-foot Toronto condo), frames the purchase as part of his “15-year lease” project, a personal commitment to pay “rent” to the planet by living sustainably. Why 15 years? Over 13 years of travelling to Xi’an and Ningbo in China for work, Bill saw a dramatic improvement in the air pollution levels in those cities, with smog giving way to blue skies. The observation convinced him change is possible in roughly that timeframe.

The house was originally designed as the Ketchums’ weekend home by Toronto-based sustainable architect Greg Allen. It was finished in 1998 after a two-year building period.  (Read Anthony Ketchum’s firsthand account of that time, “Sustainable Dwelling: A first-person account of building a solar-heated, earth-sheltered house.”)

The north and east sides of the two-storey house are built right into the hillside, which helps keep it cool in the summer and warm in the winter thanks to the earth’s constant temperature of 10C below the frost line. There is no basement and the entrance is on the bottom floor, at grade. The south and west sides of the 11-room home are positioned to harness the power and warmth of sunlight, a feature Bill says anchors the home’s ecological credibility: “Sustainable living starts with sustainable design and construction.”

The electricity powering the house is generated by a wind turbine and solar panels, then stored in batteries. Bill uses that electricity sparingly, with no extras such as a dishwasher, TV or even a plug-in hairdryer or iron. The house uses little in the way of nonrenewable resources. In cold months, sunlight streaming in the windows warms the interior brick walls and terracotta floors, but most of the heat emanates from his favourite feature of the 1,600-square-foot house: a central seven-ton wood-burning masonry heater and fireplace. Its bricks retain enough heat to keep the home warm overnight. The fireplace can also serve as an oven – albeit one that cooks all items at 200C – on its kitchen-facing side. And those windows letting in the sun? Their “heat mirror” function keeps all kinds of heat from escaping. On a chilly morning the outside temperature might register 1C, but with a fire lit in the heater the night before, Bill’s home will be a cozy 21 or 22.

While most of us can simply flip on our furnaces at the first sign of chill, Bill will have been prepping for weeks – cutting, moving, and storing wood from the forest behind the house. A bonus: he says the physical labour involved in harvesting and hauling all that wood is good for him. Other Herculean tasks abound, as Bill eschews carbon-powered motors or machinery on the property. Cutting grass? A push mower suffices. Whacking weeds? An old-school scythe does the trick – he says it’s his form of practising his golf swing. And after a hard day’s work indoors and out, he rinses off in the shower, drying off with a hand towel rather than a bath sheet to save on laundry. 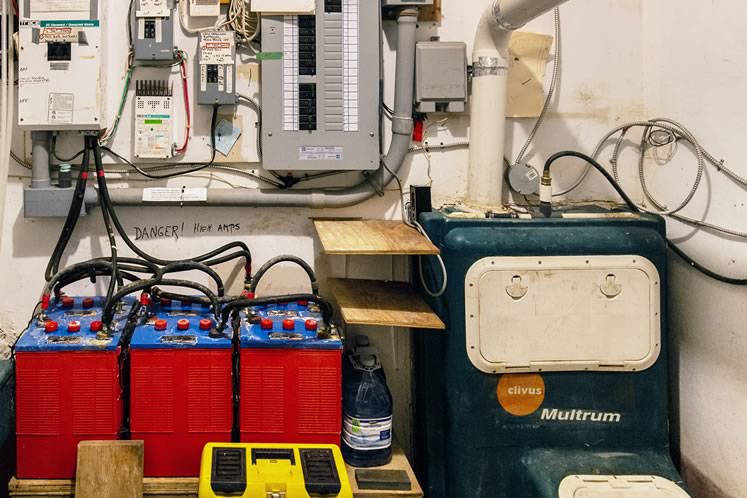 Batteries fed by solar and wind power are among the systems housed in Ketchum’s utility room. Photo by Erin Fitzgibbon. 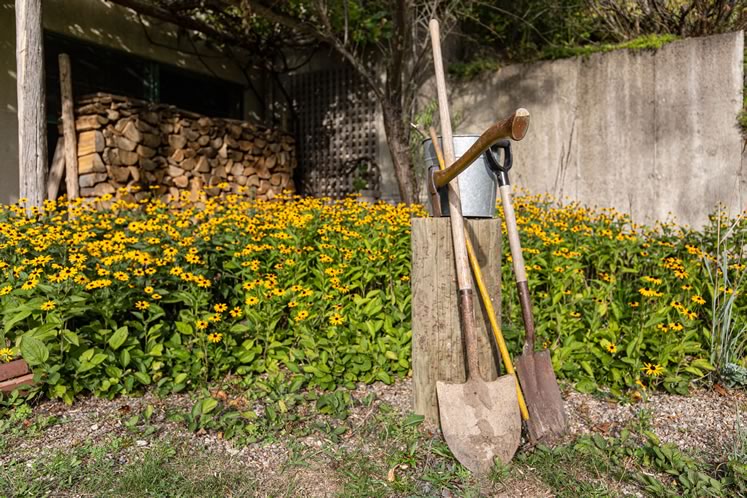 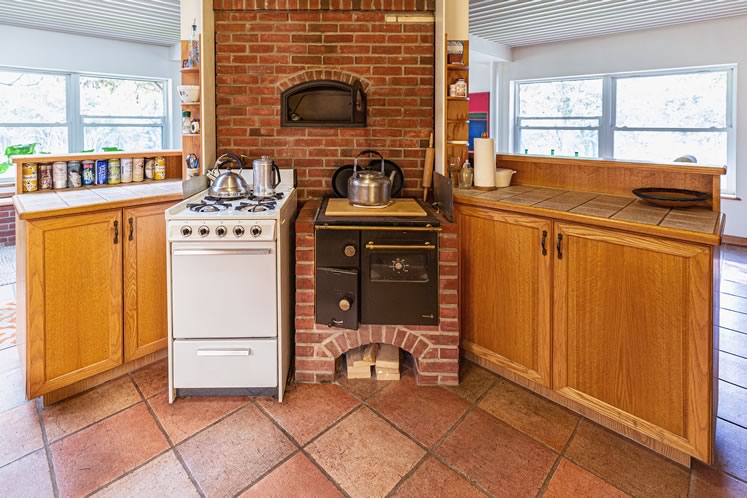 A two-sided masonry heater sits at the centre of the home, providing both heat and a 200C oven. Photo by Erin Fitzgibbon. 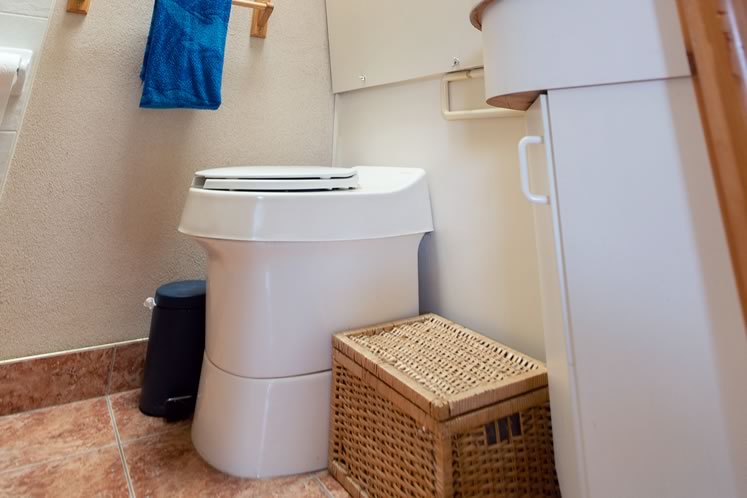 A composting toilet has been a component of Ketchum House living since 1998. Photo by Erin Fitzgibbon.

Seemingly small choices like towel size can echo across a continent and do good, Bill believes. Pandemic willing, he hopes he can soon welcome his first Airbnb visitors here and that they will absorb ideas to practise in their own lives. Last year he took a family visiting his Mono Onthe9 spot for a tour of Ketchum House, and one of them began sharing green living ideas on social media as soon as she got home to Massachusetts.

“Ketchum House is here for a specific reason, and the interest will come,” says Bill. “I envision the Airbnb check-in as a virtual tour, with QR codes loaded with all of the sustainable features. There will be a ripple effect.”

No aesthetic detail or lifestyle choice is accidental here. Bill’s tropical houseplants, for instance, share a long container, forming the backbone of a grey water filtration system. Used water from the shower, laundry and kitchen sink runs through the soil before it flows outside. Bill aims to avoid new products and instant gratification in this space, so furniture and art are upcycled from local thrift shops and online auctions. And he doesn’t miss an opportunity to connect with sellers, telling them where their pillow, table or wall hanging is headed. He even managed to convince a seller in Fergus to donate a vintage two-person hand saw as an art piece. It sits near the bottom of the staircase to the second floor. That staircase, incidentally, was itself reclaimed by the Ketchums from the Toronto home of record retailer Sam Sniderman (founder of Sam the Record Man).

A new purchase Bill is happy to show off are two bright red outdoor Muskoka chairs made by C.R. Plastic Products in Stratford. The company uses hundreds of recycled milk jugs to manufacture each chair.

Other new spending will be reserved for updating and upgrading the home’s infrastructure and technology into what Bill calls “Ketchum House 2.0.” Coming soon are new photovoltaic solar panels positioned to both collect additional solar energy (he would like to be able to iron a few shirts, after all) and act as awnings over the windows. They will replace the grape and kiwi vines currently shading the windows to help keep the house cool in the summer. 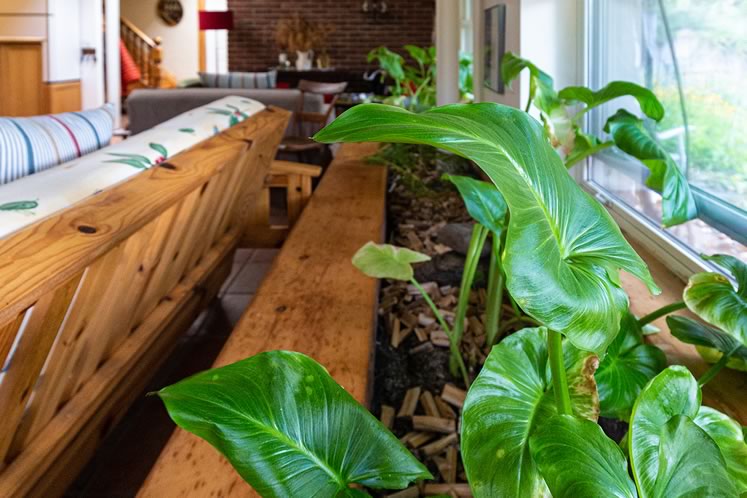 The houseplants at Ketchum House filter grey water from the shower, laundry and kitchen sink. Photo by Erin Fitzgibbon. 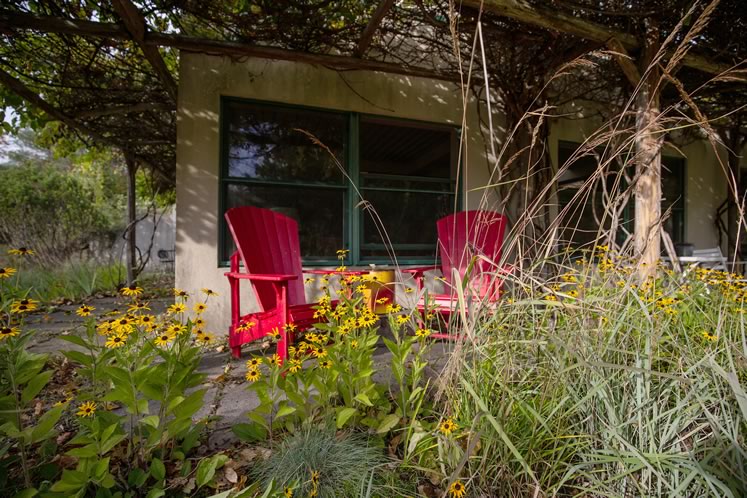 These red Muskoka chairs are the only new items Bill Dandie has purchased for the home – they’re made from hundreds of recycled milk jugs. Photo by Erin Fitzgibbon. 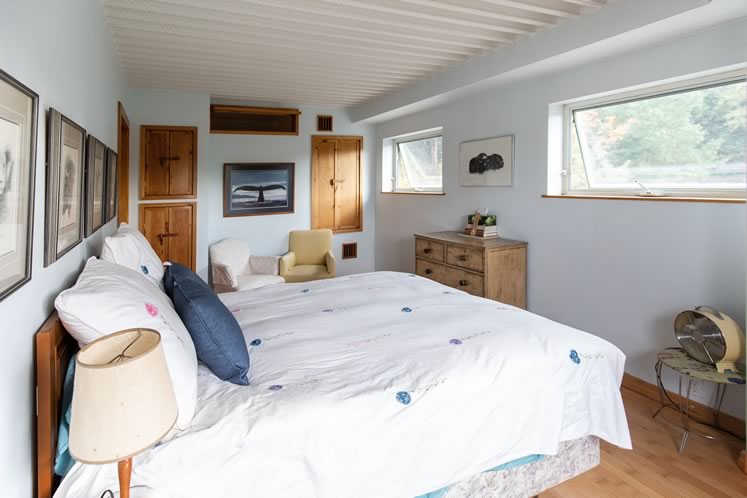 The cozy bedroom sits under a galvanized metal ceiling and is decorated with well-loved antiques. Photo by Erin Fitzgibbon. 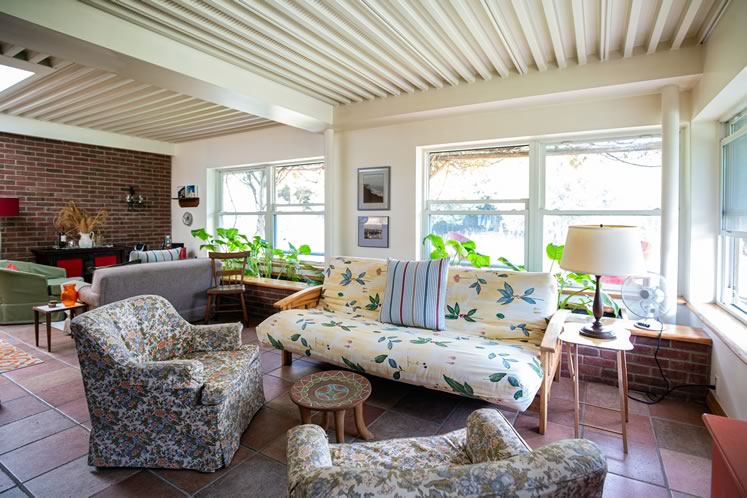 The interiors at Ketchum House, including all furnishings and collectibles, are entirely vintage or upcycled. Photo by Erin Fitzgibbon.

Other updates on the Ketchums’ work have already included repainting the white ceilings grey to celebrate, rather than downplay, the material they’re made from – galvanized steel. When renovating the bathroom to feature a shower instead of a bathtub, Bill managed to keep the majority of the existing tiles intact. He often looks to creative salvage expert and dealer Jeff Densmore of Hockley Valley and his “treasure trove of repurposed items” to help fill in the holes.

Loreto Mazzola, who manages Ketchum House and the Mono property, is another loyal supporter of the Ketchum vision. Bill named a treasured water feature Loreto Falls, after Loreto and his team cleared the area around a natural stream and waterfall, allowing its gurgling sounds to echo across the property.

Bill remains in touch with the Ketchums, and one of his favourite grace notes on the property is Mary Ketchum’s perennial gardens, which she tended for the past 20 years. He  likens the gorgeous black-eyed Susans  and blush pink rose blooms to fireworks,  a fitting celebratory image in the eyes of their grateful new keeper. 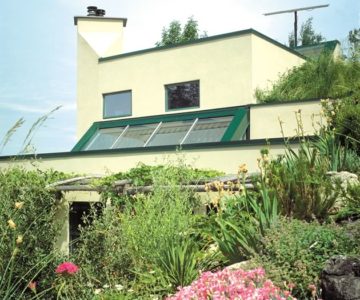 A first-person account of building a solar-heated, earth-sheltered house. 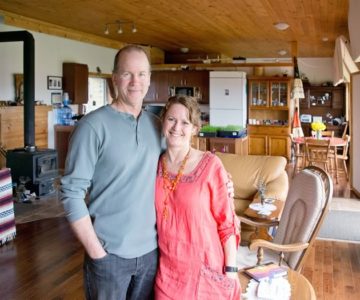 Going off the Grid 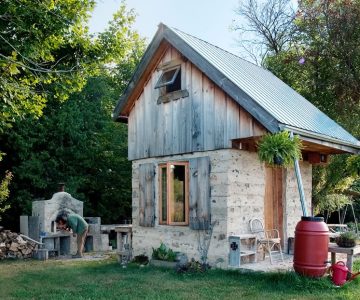 An Ode to the Tiny House

The idea of living small is undeniably alluring. Some folks in these hills are doing more than flirt with the romantic fantasy. 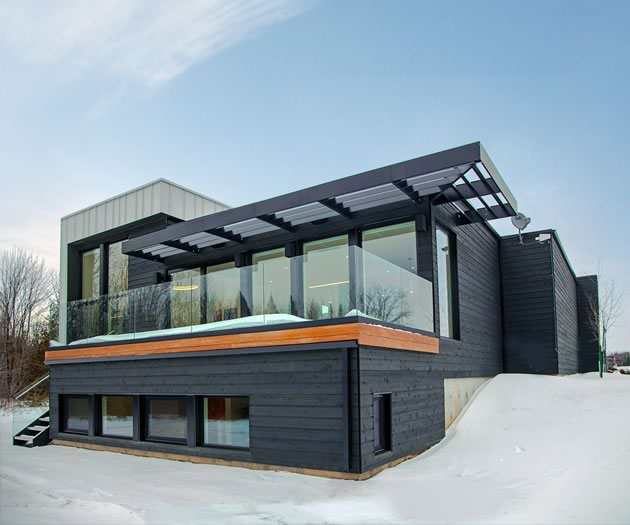 What’s Bred in the Bone

An interlocking construction technique redefines the notion of prefab.