How a Horse Helped Mend a Broken Heart

For some reason, Basil, who is a naturally cautious if not fearful person, is not afraid of horses.

By all appearances, Basil Guinane was a trim and healthy forty-four year old, so it took awhile to diagnose the genetic heart disease that was on the verge of killing him. In Love in the Time of Cholesterol: A Memoir with Recipes, Basil’s wife and Globe and Mail food critic, Cecily Ross, documents the emotional and lifestyle adjustments Basil’s diagnosis, surgery and recovery required of both of them. Each chapter concludes with one or two of the heart-friendly recipes the food-loving couple discovered along the way. In this excerpted chapter, Cecily describes how Basil’s brush with mortality inspired him to fulfill his lifelong dream of learning to ride – a decision that proved surprisingly therapeutic. Cecily and Basil live in Mulmur where they now keep two horses. 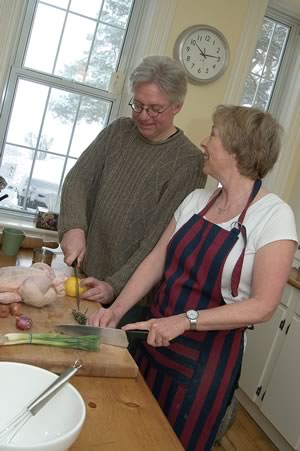 Basil Guinane and Cecily Ross cook together in their Mulmur kitchen. Photo by Tom Partlett.

Basil is lying on his back in the dirt. He is not moving. I am frozen with fear. The first thing I do, however, is move toward Becky, who has cantered to the far end of the riding ring and is now standing facing me, her head held high, reins dangling, a look of puzzled alarm in her eyes. What the heck was that all about? she seems to be asking.

There is no answer.

Becky stands quietly and lets me gather her reins. She clearly didn’t mean for any of this to happen and she gives my arm a friendly nudge with her head as we make our way over to where Basil is still lying, unmoving, on the soft earth.

“Bas?” I say as we both look down at him. His eyes are closed. Becky puts her nose down near Basil’s stomach and snorts lightly. A pigeon, the one whose sudden flapping in the rafters overhead caused the mare to shy and lunge sideways, unseating poor Basil, coos softly above our heads.

When Basil had announced that he wanted to take riding lessons, I was enthusiastic. Learning to ride was something he had dreamed about since he was a small boy. His brush with mortality made him realize that life was short and there were many things he wanted to do before he died. Basil’s mid-life crisis wasn’t a little red sports car, it was a horse.

Although he had never ridden in his life, Basil had an almost obsessive love for these big, beautiful creatures. The house he lived in when we started dating was littered with horses – photo-graphs of them, paintings of them, wood carvings, statues, wall hangings, decorative plates, and beer mugs.

“I think I detect a theme here,” I said the first time he invited me for dinner. His place looked like my bedroom had during my own horse-crazy phase – when I was ten years old.

Basil had been apologetic. Some of his horse stuff was beautiful – a legless stone sculpture, a nineteenth-century racing print – but most of it was kitsch – a wooden model of a carousel horse, an overly sentimental watercolour of an Indian pony.

“My friends and family have caught on to the fact that I have this thing for horses,” he told me. “Now everyone gives me horse stuff for my birthdays and Christmas.” Sure enough, on his next birthday, his Buddhist cousin Barry presented him with a statue of a galloping horse, the kind you find in discount stores in Chinatown, carved out of unidentifiable red stuff: not quite marble, not quite plastic.

After that, Basil asked everyone to stop with the horses already. From then on it would be the real thing or no horse at all.

Well, here it was: the real thing.

Unlike city-born and -bred Basil, I had grown up in the country and had ridden since I was a child. I got my first pony when I was three, and my family had a barn full of horses throughout my childhood and adolescence. As a result, I have no illusions about the world of horses, the work involved, the expense, and the inevitability of falling off.

For some reason, Basil, who is a naturally cautious if not fearful person, is not afraid of horses. I think he has always invested them with a kind of mystical grandeur that in his mind would make it impossible for him to come to harm while in their noble presence. I love them too, but it is not a romantic love. The relationship between the horse and rider is based on co-operation, persuasion, and mutual understanding. That’s why a 100-pound woman can be a better rider than a 180-pound man. And that’s why the world is teeming with little girls who love horses.

Indeed, on the blustery Saturday in April that Basil and I first wandered into the Creemore Equestrian Centre to ask about riding lessons, we were immediately impressed by the number of nine- and ten-year-old girls taking lessons in the indoor arena or groom-ing and tacking up mounts with a confidence that belied the immense difference in their sizes. There were no little boys around. To my surprise, the only group that rivalled the little girls in number was a handful of middle-aged men, who, like Basil, had appar-ently decided late in life to learn more about themselves by learning to ride.

Rob Hartle and his wife, Marcia, run the Creemore Equestrian Centre, which specializes in dressage training. From the beginning, Rob treated Basil with special care. Basil’s doctor had said that riding would be fine, as long as he was careful: “It takes at least a year for your breastbone to heal fully.” And since it was still only five months since the surgery, falling off would definitely not be a good idea.

Rob assigned Basil to Merlin, an experienced soldier of a horse known for his dependability and his exception-ally comfortable canter. All through the spring and summer, Merlin and Basil got on famously. Basil found riding utterly absorbing. During his hour-long weekly lessons, everything else was forgotten. Riding, he said, was the only thing (even more than meditation) that completely silenced the chatter in his head.

Even more important, riding was teaching Basil the importance of managing his emotions. It is vital to remain calm around horses because a horse can sense your fear even before you do. To be a good rider, you have to learn to act as though you know what you’re doing even if you don’t; you have to pretend you are not afraid even if you are. And you have to do this well enough to convince the horse that all is well and you are in charge. The only way to achieve this is through heightened self-awareness, by learning to recognize and anticipate your fear, or anger, before the horse does, and then acting to control it. These are the same skills that Basil was developing through his new practice of Mindful-ness meditation.

By mid-summer Basil decided that he wanted a horse of his own. It wasn’t just the riding; he had fallen in love with the stable itself – the sweat and manure smells; the rustling, knickering sounds; the grooming and tacking-up rituals.

“Basil,” the message on our voice mail in the city began, “Rob here. That mare I was telling you about. She’s arrived, and wait till you see her. She’s a pretty nice girl.”

As soon as he saw her, Basil fell in love for the second time in his life. We decided her stable name would be Becky, after Becky Sharpe, the beautiful, plucky, and sometimes devious heroine of William Thackeray’s Vanity Fair. Beautiful and plucky she certainly is. The colour of polished copper, close-coupled, and straight-legged, she is also genuine royalty, a thoroughbred mare descended from Northern Dancer and Affirmed, the last horse to win the Triple Crown.

The problem was that her owner, a veterinarian from a nearby town, was asking more money than Basil could realistically afford for his dream horse. So he agonized, his cautious, frugal side warring with his impulsive, romantic side. In the end, though, Becky’s obvious charms overrode Basil’s budget reservations.

“What good are my savings if I’m not here to spend them?” he reasoned. He cashed in some mutual funds and wrote Becky’s owner a cheque. It was an uncharacteristically reckless move for Basil, but somehow, buying Becky seemed a better investment in the future than some stocks in a portfolio. 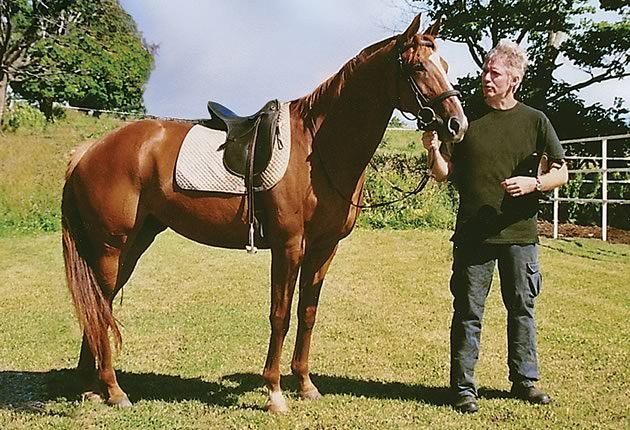 Basil and Becky started out slowly. Walk, trot, walk, trot, walk, trot, for hours on end, round and round the arena. It sounds boring, but it is actually infinitely complicated. Every movement of Basil’s hands, legs, and body communicates something to Becky, who is so responsive that the slightest pull on her mouth or weight shift can throw her off her stride. Basil must learn to concentrate very carefully, to exercise absolute control over his movements, and above all, to relax completely without losing that control.

Becky has turned out to be as proud as a princess and as playful as a filly. Her stable manners are lovely and in the ring she is alert and well-schooled. She is, however, a very different creature from Merlin, the stolid, dependable veteran of a thousand riding lessons. Our Becky is not devious, exactly, but she has a stubborn streak; she can be petulant, and she is definitely highly strung.

Which is why Basil is lying here on the ground while Becky and I stand over him wondering what to do.

Just as I am about to throw myself on his prostrate form and begin heart mas-sage, Basil opens his eyes and smiles.

He begins to laugh, a deep, throaty, almost joyful laugh. “I’m okay. I just want to lie here for a moment,” he says finally. Becky, losing interest, has begun nosing my pockets for possible sugar cubes. Basil, it turns out, is an expert at falling without hurting himself, some-thing he learned to do in the days when he studied aikido (a form of judo). I guess he was just lying there, you know, “being in the moment.”

At last, he picks himself up and brushes the sticky, soft turf from his clothes. Then he takes Becky’s reins from me, leads her to the mounting block, and gets right back on.

From Love in the Time of Cholesterol by Cecily Ross, © Cecily Ross, 2006. Reprinted and abridged with permission of Penguin Group (Canada). 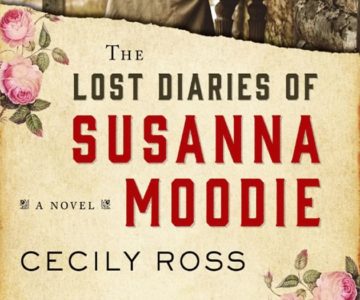 The Lost Diaries of Susanna Moodie 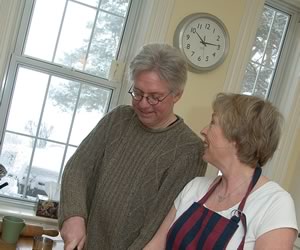 Remember, the amounts given here are guidelines. Taste the marinade as you make it and adjust the ingredients until you get a balance of flavours that pleases you. 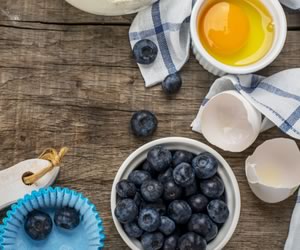 Oat and Wheat Bran Muffins with Blueberries and Flax

Even Becky would approve of these healthy high-fibre muffins loaded with her favourite grains. The oat bran reduces LDL (bad) cholesterol and the wheat bran makes you regular. The blueberries…