Dealing with a Nightmare: The 1947 Palgrave Fire

In the days before  modern firefighting,  nothing frightened  a small community  – or pulled it together  more powerfully –  than a major blaze.  The 1947 Palgrave fire  was one such case. 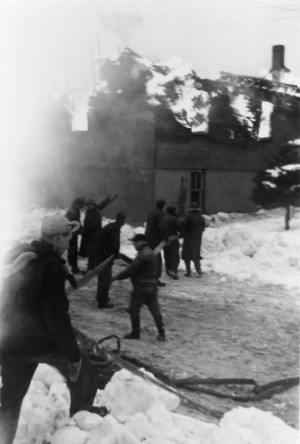 In the days before modern firefighting, nothing frightened a small community – or pulled it together more powerfully – than a major blaze. Photos by Sam Jones and I.Lavery Collection Courtesy Peel Art Gallery, Museum & Archives.

The good citizens of Palgrave always knew that without a fire brigade their village was at risk. Although there was ample water supply in a large pond at the north end of the village, there was no pressure system to move it south. Nor did it help that many frame structures stood side by side on the main street, erected in the days when building codes were a pipe dream at best.

Yet compared to other local communities, fate had been rather gentle with Palgrave. In 1919, a blaze had destroyed the railway station, but that fire didn’t spread. Then in 1929 everyone got a scare when a store caught fire, but a bucket brigade managed to put it out. Ironically, when fate finally turned on Palgrave in 1947, it was at that very same store.

On the afternoon of January 7, a Tuesday, Norm Barton was busy as usual at his general store on the west side of Highway 50. Also as usual, his customers were chatting about the weather, but on this day there was more than the usual to discuss.

Over the weekend a huge snow storm had closed roads everywhere, shutting down churches and social gatherings, even train service. Now it was bitterly cold, with freezing temperatures made worse by gale force winds. Barton was serving a customer that afternoon when, passing a door, he felt the instant stab of fear that comes with the smell of smoke where it’s not supposed to be. There was fire in the basement.

Handheld extinguishers abounded in Palgrave – for good reason – but at Barton’s store it was already too late for them. So an immediate call for help went to Bolton’s fire brigade. That’s when Barton got a second shock. Bolton refused to send its brigade. A desperate second call went out to Caledon East. This time the response was positive, but there was to be no hope for the Barton store – or its neighbours.

Roads blocked by snow meant Caledon East’s willing brigade, instead of rushing due east and then north, had to go south to Sandhill to find an open road to Highway 50. It took them over an hour to reach Palgrave. The forced detour did have a side benefit, though. When they turned north in downtown Bolton with siren wailing, the Bolton brigade changed its mind and soon followed. (See sidebar.)

The two brigades were soon joined by Schomberg’s, but by then the fire had become a conflagration threatening the entire village. The Barton store, which included a residence, along with its inventory were beyond saving, as was an unoccupied residence on one side. On the other side, St. Alban’s Church Hall was also engulfed in the raging blaze. The challenge became containment as powerful winds blew fiery embers onto shingle roofs and frame walls, starting fires on the east side of Highway 50 and beyond.

Compounding the threat was that Palgrave’s generous water supply was underneath thick ice. Whether it was thick enough to support firefighting equipment was a delicate question, but the Caledon East company continued its leadership role. Without hesitating, it rolled the tow-behind pumper onto the ice and chopped a hole to deliver water to the fire site. Ironically, that courageous solution generated a need to solve yet another problem: the hose fittings of the three brigades were found to be incompatible.

Meanwhile, high-voltage wires had dropped to the street in front of the fire, adding potential electrocution to the mix and making it necessary to cut power to the entire village, so firefighters were working in darkness when night fell.

In the face of such odds it seems almost miraculous the damage was not greater. The three buildings were totally destroyed and two families were homeless, but other than some frostbitten firefighters and Norm Barton’s singed eyebrows (after realizing his extinguisher was useless, he had to run through a wall of flame), there were no injuries. The brigades had contained a fire that was probably beyond reversing, and had saved at least five other buildings threatened by spot fires on roofs and walls. They may have arrived late, but the adage  “better late than never” was the prevailing sentiment at the end of the day. 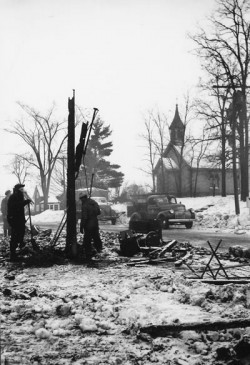 Not that the brigades from neighbouring villages did every bit of the work. From the very first moments, the people of Palgrave had jumped into the fray. A bucket brigade had formed almost immediately, but because the fire was way too hot to approach, the bucket wielders could work only on the circumference. Even older pupils from the village school were sent to join the line. (Just three weeks before, those same pupils had presented the annual school Christmas concert in St. Alban’s Hall, now burning down before their eyes.) When it appeared high winds would condemn nearby homes, willing hands emptied them of furniture and took it up the street to the Queen’s Hotel for safekeeping.

Using the Queen’s as a base for distribution, villagers from every direction showed up with a steady supply of coffee and hot food for the firefighters. Meanwhile, squads of citizens formed spontaneously, patrolling the village to stomp the spreading embers. One such watch party stood by overnight after the fire brigades had left, just in case.

As for those who had lost their homes – the Bartons and the Gedge family – by nightfall they had moved in with neighbours. Norm Barton immediately began planning his recovery. Within two weeks he was advertising he was “open for business,” albeit scaled down across the street in the Elm Tree Hotel (one of the buildings saved by the fire brigades).

The Bartons and Gedges had lost all their personal effects, but a veritable deluge of replacement clothing and other accoutrements appeared in no time at all. So complete was the level of support that on the day after the fire, when a Red Cross agent called from Toronto to offer whatever was needed, he was told no help was necessary. The fire was out, the power was back on, and Palgrave had taken care of its own. In 1947, that’s how a village dealt with a nightmare. 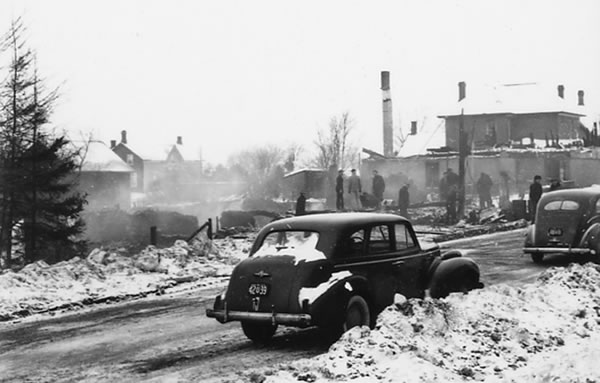 Click here to read the profiles of our other Local Heroes for 2010. Fire in the blood By Jeff Rollings, Photography by Pete Paterson Deputy Chief Paul Agar has been… 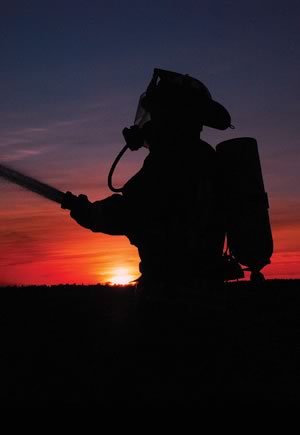 A Day in the Life of a Volunteer Firefighter

A simple “click” is sometimes all it takes. Somebody is having a bad day. That “click” is the emergency radio channel, XJI 799, coming on line.

In Defence of  Bolton’s Refusal

It was not unusual in 1947 for a brigade to refuse “outside calls.” Prior to the Palgrave fire, the Bolton Enterprise had editorialized more than once about the need for additional tax support from surrounding Albion Township if its citizens expected protection by Bolton’s equipment. According to the Enterprise, Bolton’s fire chief and deputy were absent the day of the fire, so it’s possible whoever said “no” to Palgrave was following a policy that might have been overridden had the chief been available. Oral history has it that a Bolton councillor made the decision to respond after seeing the Caledon East brigade go through town.

Just How Cold Was It?

The Caledon East brigade first had to hack off a solid covering of ice that had built up on its pumper during the ride to Palgrave. Before the firefighters could go home that evening in 1947,  two volunteers rode the train to Caledon East to get clothing for the rest of the crew who were so coated in ice they were nearly frozen in place. Even so, the fire equipment almost did not make it home because a Department of Highways snow plough out of Brampton couldn’t clear the road. Local man Wilson Bowles, using a former army truck he’d fitted with a blade, was able to do the job. Caledon East’s brigade got home at midnight.

Some things just never change. While fire raged on Highway 50, the Ontario government announced at Queen’s Park that the new four-lane Weston-Barrie highway(we call it Highway 400 now) was behind schedule and would not be finished by summer as promised.