The Art of the Non-Artist

For a busy Caledon art conservator, delicately recapturing the truth of an artist’s vision is a calling that combines art and science. 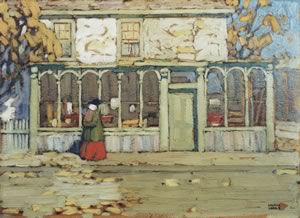 Jayne Woods cleaned years of grime from this Lawren Harris painting called “Woman on the Street.”

To restore the painting, Woods had started by tackling a century or so of dirt, drawing on her knowledge of chemistry to choose a solvent that wouldn’t damage the type of paint she knows is typical of that era and location. But beneath the grime was another problem. The cracks of age over the face had pulled so far apart that the character was gone. The fix had required much more than technical prowess.

The challenge? To bring to life a person she had never met and whose portrait had been painted by an artist Woods didn’t know.

“I’m no artist,” insists Woods, snaking her way between rows of leaning canvases in her chockablock Caledon studio. Her tone is matter of fact. There’s no feigning modesty for this professional conservator, who has spent the past three decades breathing life into tired and damaged artworks.

Some of the artists who created the works have been celebrated, even revered, such as abstract expressionist Helen Frankenthaler and Lawren Harris of the Group of Seven. Many more have been unknown, some deservedly so.

Nor is Woods apologetic. Her work as an art conservator is no fallback from a failed art career. “I have no burning creative vision of my own,” she explains with the dispassion of a surgeon. “My thing is recognizing and recapturing the original truth of an artist’s vision. It’s a place where art and science intersect.” It’s also a place where a lack of ego and some MacGyver-like instincts are keys to success. 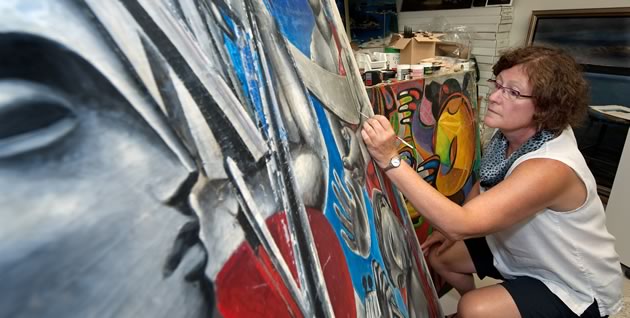 Jayne Woods is currently working to restore a large painting by Hugh Stollmeyer, called “Classical Trio.” Stollmeyer is the brother of Daphne Lingwood, a wellknown Caledon East artist and honoree of the Caledon Walk of Fame. His works are now in the care of Daphne’s son Rex Lingwood, who commissioned the restoration. Photo by Rosemary Hasner / Black Dog Creative Arts.

“So there was this 11th-century Russian icon on wood with a lot of gold-leaf paint loss,” she says – and pauses as I gasp. “You see I don’t react emotionally to the pieces, whether they’re old or important. I just assess the whole picture and figure out the least amount to be done to bring back safely what the artist intended.”

In the case of the icon, Woods guestimated the percentage of gold in the leaf to be replaced. She filled in the damaged areas and then added some patina to match the aging. You’d have to look at it under a UV light to see her handiwork.

Woods starts every project with one key rule in mind: do no harm. She comes by this artsy take on the medical ethos honestly. Her father was a doctor. Her mother, now almost 92, is an art curator who championed the contemporary and sometimes controversial Painters Eleven, who rose to prominence in the 1950s. Kay Woods was the first curator of the Robert McLaughlin Gallery in Oshawa, which features the works of the eclectic group.

“Mom would buy Painters Eleven works for the collection and hold onto them until the gallery could afford them. The gallery always paid what she paid, exactly,” says Woods. “I learned from her to never take advantage. The integrity of the art always comes first.”

In a realm with plenty of room for questionable dealings, Woods made her standards clear from the get-go. With degrees in both science and fine art, and a conservancy internship under her belt, the young Woods was introduced to renowned Toronto art dealer Gerald Morris. “We’re really good at oil paintings. How are you at signatures?” he asked. Woods laughed out loud and the two became fast friends.

Her integrity applies to the fine strokes of art conservation too. Sometimes there’s damage or the painting doesn’t fit a client’s living room wall, so she is asked to cut it down or fundamentally alter it. “Who am I to change that artist’s vision?” asks Woods. “I tell them that’s not up to me and I send them on their way.”

Other times, she says, it’s a matter of less is more: “I’ve seen airbrush fixes that covered a swath of four or five inches where a few strokes with the finest brush would have been ample. When I see this done, I have to remove the overpaint to fully restore the piece, but sometimes it’s tricky.”

Which is not to say that some of Woods’ restorations haven’t required major intervention. One historic seascape arrived with only half the painting intact. “I found a tiny fragment of another mast under the boom of the one ship that was left. I researched possible vessels of the period and, with the client, chose one to repaint. I extended the water, added some cracks to match up the aging. The owner was thrilled.” And still, Woods insists she’s no artist.

Other works require more forensic expertise, such as knowing the difference between the chemistry of an egg tempera painting and an egg yolk-water varnish. There’s also the surface on which the work was painted, when it was painted, the source of the damage, the type of paint and more.

“We know a lot about restoring older paintings, but there are some contemporary pieces with issues that we still don’t have answers for,” she says. 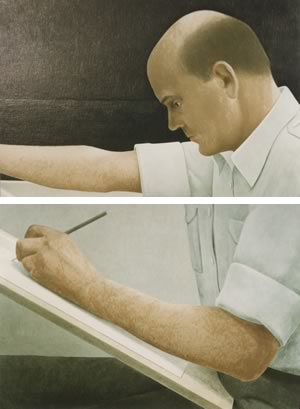 Woods’ challenge with this painting by Christopher Pratt, shown here in two details, was to restore the pigment fading from the subject’s skin. Photo by Rosemary Hasner / Black Dog Creative Arts.

One of these mysteries cropped up in a painting by Christopher Pratt. Patches of white had emerged as the pigment disappeared from some areas of the work, a nude in a landscape. Woods interviewed the artist extensively about the process he had used when painting and sent tiny samples, each about the size of a typed period, from the damaged areas for expert testing in Ottawa – to no avail.

“Weeks later I retrieved a package from my mailbox,” she says. “Some workmen were standing around nearby when I opened it to find two breasts by Mr. Pratt, painted in a similar period. A prankster, he’d cut up one of his paintings and sent it for me to observe how it changed over time. I framed it. Pratt’s breasts still hang in my bedroom. No changes yet.” And no solution to the mystery of the disappearing pigment.

Woods freely admits her know-how and experience sometimes get a boost from dumb luck. One of her projects involved a large contemporary painting by Gershon Iskowitz. The work was in rough shape. Damaged by water and smoke, then wrapped in plastic for three months, it was covered in mould more than an inch thick. Woods removed most of the mould, then placed the painting in a humidity chamber to slowly reduce the moisture level by half. “The remaining mould seemed to eat away smoke damage that I could never have reached. I wish I’d saved some of it to use on other pieces.”

Woods may be coolheaded and dispassionate, but everyone has a vulnerable spot. “Ten large pieces I received from Ground Zero were very emotional to work on,” she reflected. Her husband John Chappelle, a firefighter captain, died a few years later of a work-related illness. “I do feel emotional pressure in other areas of my work too, but not so much for the big names. Rather, it’s things like family keepsakes – those pieces are priceless.”

As for the old portrait owned by the Orangeville family, Woods was determined to find a solution. Delicately filling in flesh-toned pigment in the face was just the first step. “I had to find the personality of the young woman, but there were no usable photos.” So Woods asked the client for pictures of family members who resembled the subject – a niece with the same mouth, a cousin with a similar nose, a son with like eyes. From these, Woods reimagined the face.

“I never felt it was me repainting her,” she explains. “I was just reclaiming the life that the artist first saw. I always feel an obligation to be as precise as the artist, whoever they are. I have to be just as passionate and honest.”

“But you’re not an artist?” I ask again. She shakes her head, not budging on this point.

“So yours is the art of the non-artist,” I reframe.

She pauses, smiles, then concedes, “Okay, I like that. The art of the non-artist.”