It’s been a smooth flight. I can’t wait to get there.

I write to you from high above the hills, 30,000 feet in the air, cruising along at 800 kilometres per hour. I’m on my way to a getaway, with absolutely no children on board, and it’s eerily quiet. All souls around me are quite well behaved, despite the party destination that lies ahead.

My first flight was not such a sophisticated affair. I remember it distinctly, my 12-year-old senses on overload. My family had driven to Florida right after my mom had pretty major surgery. The trip had been a questionable decision, motivated by our collective affinity for the beach.

Twenty-two hours of maniacal driving got us there. Heading to the beach for R and R seemed like a good idea at first, but the drive had left my mother in more pain and struggling to get comfortable in her woven beach chair. Our family decided she and I would fly back, and my dad would take the car home alone.

We purchased a last-minute flight. I had never been to an airport, and a tropical one at that. This airport was open and breezy, but smelled of benzene and stripped my eyes of tears. Engines roared and reverse indicators beeped. I can’t remember what happened to my bag or if I even had one. I was terrified.

We boarded the aircraft, my mom still tender and slow. She had only flown once before, from Toronto to Montreal when she’d won an academic contest. Her blue eyes looked at me with a mixture of mirth and trepidation as we observed the assortment of passengers boarding around us: the crispy-burned-calamine-lotioned, the leisure-suited-mirrored-glassed, the terrified-back-arching babies. People crushed out their final cigarette before take-off. The seat beside us was empty. Maybe we would be lucky…

But no. Passenger A to our B and C seats arrived, taking his aisle seat. He made it on board just as we were about to taxi to the runway, sweating profusely, his curly chest hair glistening out of the top of his shirt, tangled with his gold chain. Clearly agitated and nervous, he placed his arm above me and leaned over to the window to watch our take-off. His shirt was stained yellow, and sweat dripped off his nose onto my bare leg. My throat closed in with nausea from the cacophony of modern travel. My mom held my hand. People clapped when we landed. I felt as if we had cheated death.

Since then, I can report that I have experienced many safe and uneventful flights. I have also experienced a few bad ones. One in particular stands out – a short flight from Toronto to Ottawa. A storm cell gathered suddenly over the Ottawa airport, and a clear and uneventful flight almost resulted in disaster. The 60-year-old man who screamed and grabbed my hand as we plunged later wrote me a thank-you letter for being kind as we hurtled downward.

I actually worked at Toronto’s Pearson Airport for a while in communications, and watched the planes come in, all day long. Big bird, after little bird, after big bird. One day someone ran in to ask us to turn on the TV – a plane had, unbelievably, crashed into the World Trade Center.

That day changed air travel forever. For many years the images from 9/11 replayed in my mind and I just didn’t want to fly as much anymore. I had read too many articles, I was afraid of my fellow passengers, and tried to guess who was the air marshal on board serving to protect us. I felt sick and scared whenever I got on a plane, and eventually asked my doctor for a sedative to calm my nerves on my next flight. Needless to say, I overdid it and drooled from Toronto to Vancouver to Hawaii. My in-flight lunch, then dinner, came and went, untouched. I indifferently accepted a lei placed over my head just before landing.

My next trip was to California and was my son Adrian’s first flight. He was about to turn three and his eyes twinkled as we read board books about “Airplanes” and “Airports” over and over. Take away the terrorists and media attention to such things as debris scatter, take away sweaty, smokey, nervous flyers and you have a modern miracle. With my child in tow, I was determined to keep the mood light, my family relaxed and focused, and myself drug-free. The flight was fine. It was smooth and – as I experienced it through the eyes of my son – delightful. We counted down the seconds until the wheels left the ground – up, up, and away! 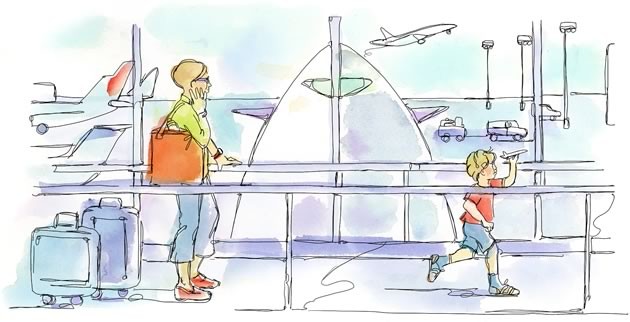 My next trip was to California and was my son Adrian’s first flight. He was about to turn three and his eyes twinkled as we read board books about “Airplanes” and “Airports” over and over. Illustration by Shelagh Armstrong.

Every day of every year, millions of passengers load into aircraft, and pilots, computers and crews fly us to new adventures. We shoot through the sky, and land safely at our destination. I’ve become a much better air traveller. Right now I’m looking out my window at the red clay hills rising to snow-peaked caps, thousands of feet below. It’s been a smooth flight. I can’t wait to get there.

I also can’t wait to come home. The minute I land, I will use another modern miracle to text that I have landed: I’m here, I’m alive, and I will see you in four days! I miss you already and will see you soon.

This July the Credit Valley Conservation Authority, with the dedication of the community, the CVC Foundation and Friends of Island Lake, will open the final section of trail at Island Lake to complete the long-awaited loop. A circuit on bike, with stroller, or on foot is now possible with your family and four-legged friends. Watch local media for the announcement. The loop will be a great way to burn off some steam and get active before or after those lazy, hazy barbeque-filled afternoons. creditvalleyca.ca

Help monitor the health of the Credit River by volunteering at an electrofishing station near you. Electrofishing uses electricity to stun fish as a monitoring technique to inventory fish species and populations. It is a safe and fascinating activity. Credit Valley Conservation depends on volunteers to help carry out this type of monitoring. Those under 18 are welcome – you just need to bring a waiver signed by a parent/guardian to participate. Get ready to discover what lurks beneath the water! Various places along the river need your help. creditvalleyca.ca

Need to cool off? Splash pads and outdoor pools are an easy and inexpensive way to beat the heat with your kids this summer. Here are a few options in our area – check in advance to confirm hours and admission fee, if any, and then pack your sunscreen!