Gail Prussky How not to be a Serial Killer

The unhinged imagination of Gail Prussky

When people familiar with Gail Prussky’s art meet her in person for the first time, she says she often gets the same two reactions: “One, ‘You’re so old!’ And two, ‘You look normal!’ They expect me to be some 25-year-old punk with purple hair and rings in my nose.” 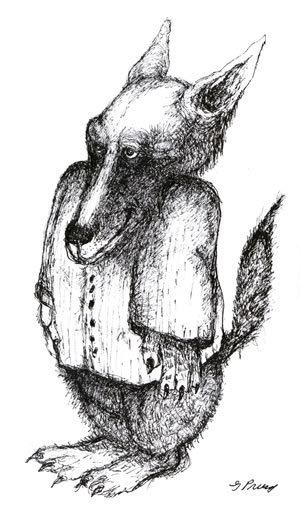 The misplaced expectations are understandable. Beneath her disarming exterior lies an imagination unfettered by conventional boundaries. Gail is an artist who, by her own admission, likes to push the envelope of darkness and light, the poetic and the profane, hope and despair, the heinous and the hilarious.

Exhibit A: A whole series of blood-soaked bunnies, committing mass murders and suicide, or skewered on the spires of tall buildings. Exhibit B: A pride of eggplants – yes, of course, it’s a pride – triumphant in the gory kill of an antelope. Exhibit C: A few not fit for a family-friendly magazine such as this.

But all those come along with many others that are just strangely and deliciously silly.

Though Gail is most prolific producing drawings, often creating several a day (“they take 20 minutes, tops”), she also paints, working on paper, canvas, wood and fabric. Even if the themes are sometimes adult, the childlike quality of the work sustains its appeal. The clever text that often accompanies the images has a matter-of-fact tone that humorously serves to familiarize the bizarre.

Gail moved to Mono eight years ago. Though she has a degree in fine art and has drawn since she was child, she made her career as an addiction therapist at the Donwood Institute in Toronto, working with cocaine and crack users. Of her ten years there, she says, “I was very good at it for nine. But then I was burned out. And they weren’t the kind of clients where you could fake it.”

Gail says it wasn’t until she moved to the country that her “muse kicked in.” First, she became involved in the community fight against the Highland quarry application in Melancthon, contributing cartoons for a stop-the-quarry Facebook page. “That’s what really started the ball rolling up here for me,” she says, “because I had an audience, and I had a way to express my frustrations. I didn’t make art as much when I lived in Toronto. I found my voice out here.”

Before too long Gail was accepted into the Headwaters Arts Festival show. “That really connected me to the arts community here,” she says. “That’s where I met Diana Hillman. She asked me if I wanted to be part of her art group, the Silver Creek Arts Project. The fall show we do every year at Diana’s farm in Caledon is wonderful. We put up art in her 150-year-old barn. Art in a barn is awesome.” 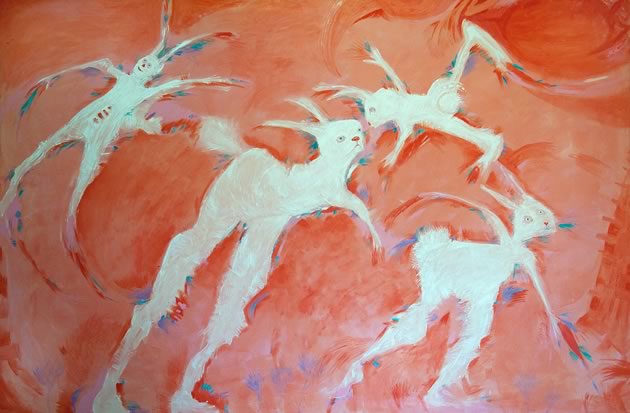 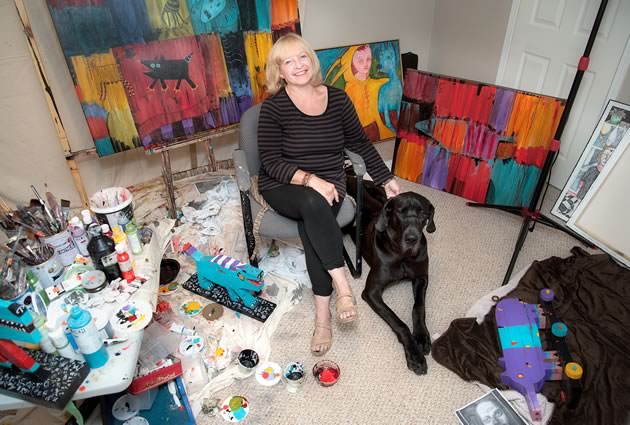 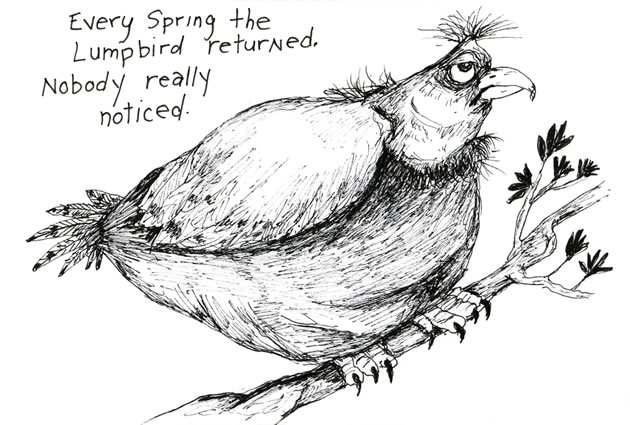 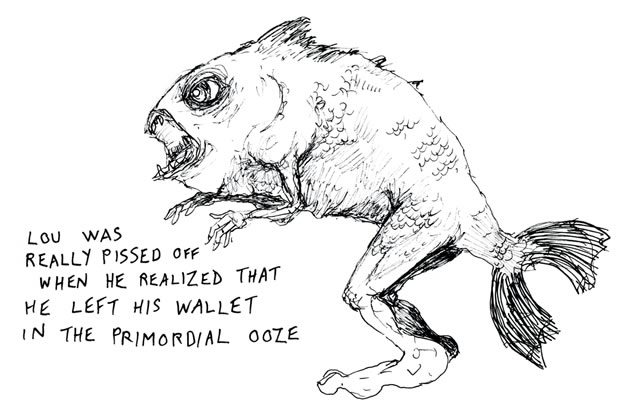 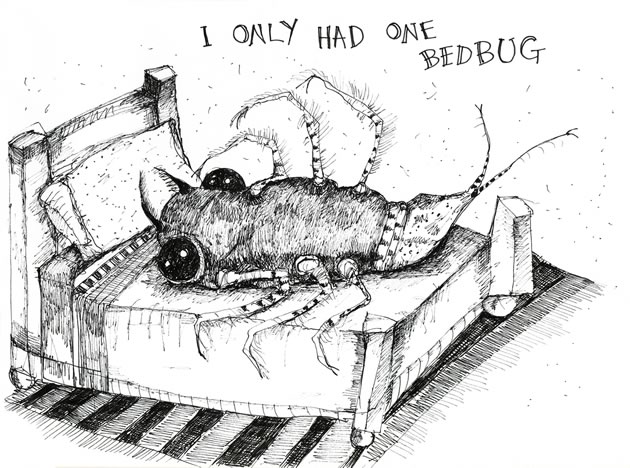 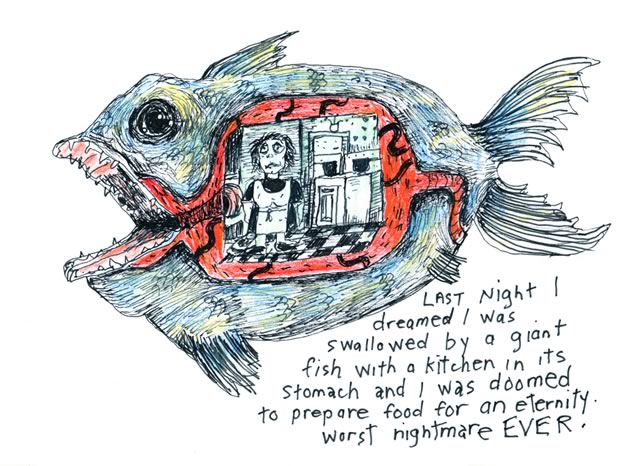 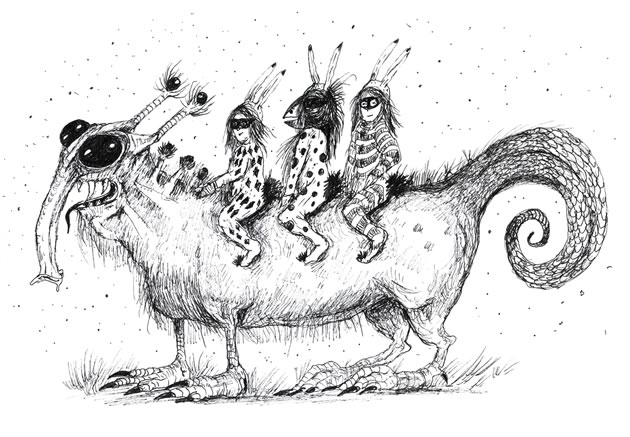 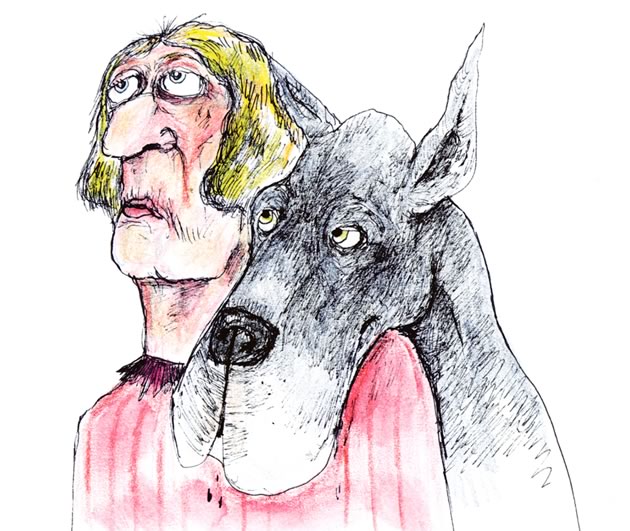 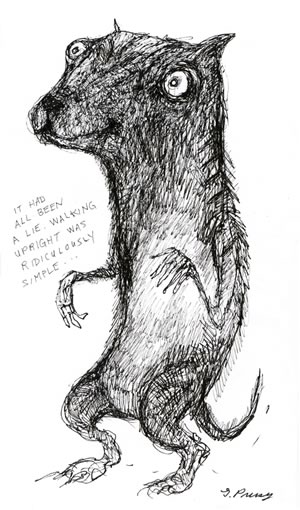 Asked to describe her art, Gail focuses on the creativity, not the result. “For one thing,” she says, “every artist has their own process. Probably the majority of artists paint from photographs, or they paint in nature, or they draw, and then they paint it. I don’t. I just sit down and begin – and whatever comes out, comes out. There’s no plan. I’ve tried to do that, and it doesn’t work. So wherever this stuff comes from, it comes from a place that doesn’t have much language. I know that. When I’m painting, my brain isn’t in the room. I turn music on and I go somewhere.

“So when someone asks me to talk about my art, which happens often at shows, I have trouble. And that’s bad, especially because the people who are going to buy your art like stories. They want to know, ‘what were you thinking, what was this about?’ and it’s just a mishmash. It’s not one story. But I can tell you what mood I was in.

“Part of it is stories from the time when I was an addiction therapist. I heard some of the worst stories. I didn’t realize until I was finished that job that I was vicariously traumatized a lot. I’d never even heard those words, ‘vicarious trauma.’ But I heard a lot of awful stuff. One of the reasons I was bad at it at the end is because I was desensitized to it. Someone would tell an awful story and I’d be thinking about what to have for supper.”

Even if Gail can’t quite put her finger on the origin of her work, its distinctive originality has gained a following. Author Barry Callaghan) will be publishing a book of 40 of Gail’s drawings and paintings, due for release in early 2016. Borrowing one of Gail’s oft-repeated claims, he plans to call the book “If I Didn’t Draw, I’d be a Serial Killer.” Filmmaker David Cronenberg has agreed to collaborate on text for the book.

Gail’s Facebook page is nearly as entertaining as her art. There, along with an ample record of the antics of her beloved Great Dane, Satchmo, Gail posts her drawings and observations on art, politics – and the absurdities of daily life. In return, a witty group from among her thousand-plus followers offers often laugh-out-loud funny speculation about her creatures’ names, lives and backstories.

“I attract a lot of like-minded weirdos,” she says. “They’re very clever people, and they’re from all over the world.”

Of Gail’s prolific artistic impulse, perhaps no one should be more grateful than her husband. “I don’t know what would happen if I didn’t make art,” Gail quips. “Alan would have been dead years ago.”

Gail Prussky’s solo show at Dufferin County Museum & Archives
November 1 to December 20. Meet the artist on November 1 from 2 to 4 pm.
In advance of the show, Gail is also putting on a kids-only sketching workshop on October 18 for ages 8 to 12. The results will be displayed in the museum’s Silo Gallery.
Cost $10, register by calling the museum, 1-877-941-7787.

If I Didn’t Draw, I’d be a Serial Killer

A book of Gail Prussky’s drawings and paintings scheduled for release in early 2016. Published by Exile Editions.