Then the sun emerged and I saw a glint of gold rim on the gravel bottom.

I am teaching my son to fly-fish. We are wading the mouth of the Beaver River on Georgian Bay in search of Atlantic salmon, a species recently restored to these waters. I know from experience it is dangerous work.

I learned to fly-fish for salmon in England on the River Mole in North Devon. My teacher, a retired country doctor named John Wingfield, took me out to the front lawn in front of his Victorian cottage and taught me how to cast the fly, flicking the rod like a paint brush between the ten o’clock and two o’clock positions. When he was satisfied I could hit a handkerchief at 30 feet, he sighed and waved me off to the river. “Try not to frighten the fish,” he said.

I spent the summer of 1971 wading the Mole and bringing back news of it to Dr. John. I caught little speckles and cooked them on the bank as the cows watched. I once saw two large brown trout flash by in the silver water, but I never saw any of the salmon for which it was famous.

A few years ago I returned to those waters in the company of Andy Gray, a business partner of Dr. John’s daughter. Andy is what is known in the Devon countryside as “a keen shot.” His car looks and smells like someone had lived in it for several years and then died in it. This is because he hunts and fishes with a wet dog and the back seat fills with the detritus of the chase along with pieces of dead rabbit for his falcon, which always rides on his wrist.

“I think the cell phone rule is a bloody good one,” he says, reaching across to change gears. “You absolutely cannot drive with a falcon on one hand and a cell phone in the other.”

We had a pint in the Grove Inn at King’s Nympton, which welcomes dogs and falcons, and then drove down the hill to Wampford Bridge, which crosses the Mole. We walked across the meadows to a stretch of the river that flows down into a newly-formed pool called The Pot. Nothing about the scenery has changed in 40 years, not even the cows. Andy handed me two flies, a Stoat’s Tail and a Hairy Mary, and told me to work across the river down to The Pot.

“Don’t do anything stupid or we’ll pick you up in the Bristol Channel,” he warned. We wished each other “tight lines” and set off.

It had rained in the night and the water was high and very fast. I tossed the fly gently upstream and watched it float down. It snagged something. On the very first cast I feared I had lost Andy’s expensive Hairy Mary fly. I gave the rod a tug and a beautiful salmon leapt up out of the water, flapping its tail.

I fought down the surge of adrenalin and said firmly, “You are not going to catch this fish. Just enjoy the moment and don’t do anything stupid.” Then I dropped my net. I lunged forward and grabbed it before it went to the Bristol Channel. My waders took on a gallon of water and I had to let the rod tip down and stagger out to the safety of the shallows. Letting the line go slack on a fish is almost always fatal. But when I raised the rod again, the fish was still on. He raced away down the river and then raced back up. We fought ferociously for the next 15 minutes. 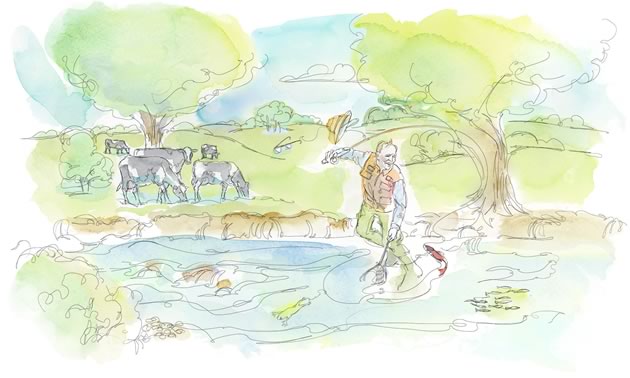 I fought down the surge of adrenalin and said firmly, “You are not going to catch this fish. Just enjoy the moment and don’t do anything stupid.” Illustration by Shelagh Armstrong.

As the fish tired, I eased him into the shallows and snuck up behind him with the net. He zipped right around me, the line caught behind my ear and flipped my glasses 15 feet out into the river. I had no spare pair, I had a rental car and it was four hours to the airport. I had to find those glasses. I fixed my eye on the spot they’d gone in and waded toward it, still holding the rod high. Then the sun emerged and I saw a glint of gold rim on the gravel bottom.

Sometime later, Andy found us lying together in the shallows, both gasping for breath. I had strained so hard with the rod, I had popped the bicep muscle off my elbow. But the fish was in the net.

“I thought I heard someone screaming for help,” he said cheerily. “Oh my! That’s a real fish. It must be seven pounds.”

“Is this catch and release?” I wheezed.

“God, no. The savage has maimed and drowned and blinded you,” he said. “The river wouldn’t be safe if you threw him back.”