Inspired by Frisbee and played without referees, this field game is all about the sporting spirit.

Ultimate Frisbee is a game I was going to like even if I didn’t take to playing it. Who wouldn’t be wooed by a sport that eschews referees, coaches players on sporting behaviour, and came about because a bunch of Yale University students discovered that the metal pie plates made by the neighbouring Frisbie Pie Co. flew like, well, Frisbees.

Ultimate, as the sport is usually known, is described as a cross between football and basketball. Football because ultimate is played on a similar, though smaller, field and players score by throwing the disc to someone in the end zone, and basketball because players can’t run with the disc in their hand.

When I arrived at the Orangeville Fairgrounds on a glorious Wednesday evening last July to join a casual pickup game, I asked organizer Darryn Stevenson what makes a good ultimate player. A 21-year teaching veteran in the phys ed department at Orangeville District Secondary School, Darryn responded with the obvious: speed, agility, good hands. Then he added, thoughtfully, “The ability to make a good ‘cut.’” What he meant was that, like a receiver in football, an ultimate player needs to get into the open so he or she is in the right place at the right time to catch the disc.

Darryn’s observation about making a good cut stuck with me. This ability became particularly obvious because we were playing one on one. This means each player on one team chooses a player on the other team to defend against. The idea is to prevent the player you are covering from being in the open where they can catch the disc.

Sometimes the person I was defending against was faster and fitter than I am, so I couldn’t keep pace. The Orangeville league is co-ed and has players from as young as 16 to older than 50, though most are at the younger end of this range. One youngster I was defending against would be in the clear in the end zone, ready to catch a pass, while I was still galloping down the field trying to catch up. Then I was paired with a young woman. She was experienced but didn’t run that far or that fast. She didn’t deke here and there. Nonetheless, she was forever in the open. Sometimes she’d be in the end zone, but more often she’d be somewhere midfield where she would catch the disc and pass it to someone in the end zone.

Her skill reminded me of a 1999 article in the New Yorker by Malcolm Gladwell, titled “The Physical Genius: What do Wayne Gretzky, Yo-Yo Ma and a brain surgeon named Charlie Wilson have in common?”

Gladwell’s analysis of what distinguishes a superstar is a fascinating read. Though the young woman I shadowed was not ultimate’s “Great One,” she possessed the skills Darryn had mentioned: speed, agility and good hands. Gladwell wrote, “The puzzling thing about physical genius, however, is that the closer you look at it the less it can be described by such cut-and-dried measures of athleticism.” Sure, my shadow was athletic, but she was more. She could make “a good cut.” Gladwell added, “What sets physical geniuses apart from other people, then, is not merely being able to do something but knowing what to do – their capacity to pick up on subtle patterns that others generally miss. This is what we mean when we say that great athletes have a ‘feel’ for the game, or that they ‘see’ the court or the field or the ice in a special way.”

I had fun playing ultimate. It was like being a kid again. I ran up and down the field trying to stay with the person I was defending against or to get into the open myself. But I didn’t have a natural skill. No good cuts for me. The one time someone passed the disc my way, I failed to catch it. But it was a great workout and the other players were fun – and understanding. I felt comfortable despite being a beginner.

While on the sidelines, I listened to their banter: “What an amazing catch!” or “Look how fast so-and-so is.” Comments like these are pretty standard in sport, but for ultimate players the banter must be positive. Unsporting behaviour, both on and off the field, is verboten. Ultimate’s “spirit of the game” policy states the onus is on players to be honourable and fair. There are no referees, and if players or teams display unsporting behaviour, they may be asked to attend spirit-mentoring clinics. Players and teams are evaluated on the basis of their spirit of the game, and ultimate lessons teach sporting behaviour as well as ultimate skills. 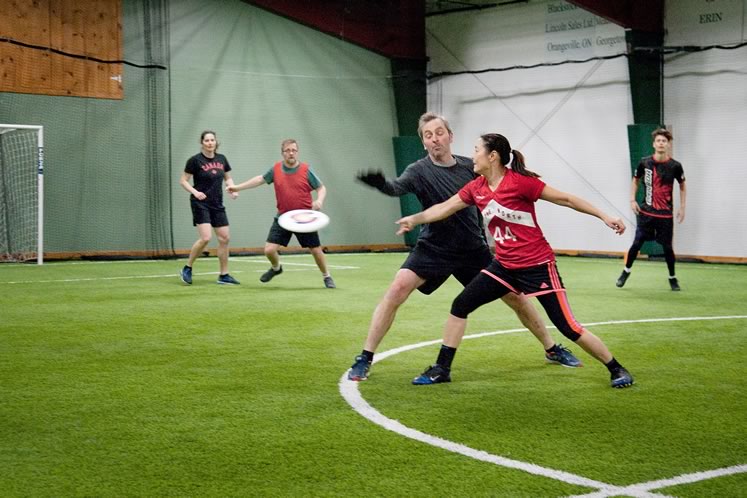 The game’s spirit is what drew Monica Kerr-Coster to ultimate nearly 30 years ago. A Caledon resident and owner of The Noodle Gallery at Alton Mill, Monica says she also loves ultimate because “everyone on the field has to be active.” Inducted into both the Toronto Ultimate Club Hall of Fame and the Ultimate Canada Hall of Fame, she was nicknamed “Iron Mon” in the early days because she was often the only woman on her co-ed team and would have to play the entire game without a break. To alleviate that situation, she successfully encouraged other women to play. She also coaches kids, formerly in Toronto and now in Caledon and Erin.

Monica clearly has Gladwell’s feel for the game. She has played in 14 Canadian ultimate championships, reaching the finals eight times and twice coming away with a gold medal. In addition, her club was selected to play in the 1997 World Ultimate Club Championships, and in 2012, she was a member of the Canadian national team that competed at the World Ultimate & Guts Championships in Japan. She also led her team to the USA Ultimate club championship seven times and was twice honoured with the individual Spirit of the Game Award.

On the Canadian Hall of Fame website, a photo shows Monica in full layout position. She’s about a foot off the ground, grasping the prized disc in her outstretched hands. “I’ll go the extra mile,” she says. But what she really means is that she’ll go the extra inch or two she gets by flying through the air like a baseball outfielder.

Walter Morrison, the World War II fighter pilot who later developed the plastic disc so popular today, also knew something about flying. He called his invention the Whirlo-Way, then changed the name to Flyin’ Saucer and then to Pluto Platter. But the discs didn’t catch on until Wham-O, the American company that also sells hula hoops and other toys, began marketing them as Frisbees in the late 1950s. (The spelling was changed to avoid trademark issues with the pie company.) Since then, Wham-O alone has sold more than 300 million of the colourful flying discs that attract thousands of ultimate players worldwide.

Where to play ultimate Frisbee

The Orangeville ultimate league runs outdoor sessions at the Orangeville Fairgrounds in the spring and summer, and at the Princess of Wales Park baseball diamond in the fall. Individuals and teams can sign up online at Active Diversions activediversions.com. 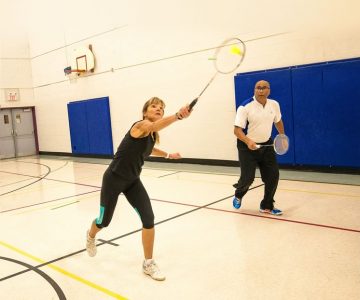 Birds of a Feather: Badminton 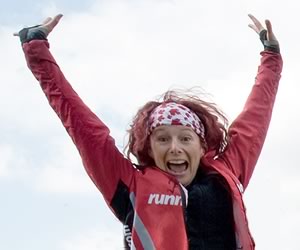