Cheryl Russel says her father inspired her interest in local politics and “made it clear that he expected me to pay attention.”

If there were a Guinness Book of Records for local municipal engagement, Cheryl Russel would have a star entry. Cheryl estimates she has attended 90 per cent of Mulmur council meetings over the past 11 years, often as the only private citizen in the chambers.“This gives me enough history to follow patterns and be up to speed on whatever issues are being discussed,” she says.

At 74, Cheryl is just now hitting her stride. She is the recently appointed chair of the local police service board, vice-chair of its roads safety committee and, for the past five years, a board member of MC2, the Mono Mulmur Citizens’ Coalition, formed to represent the interests of the citizens of the Town of Mono and Mulmur Township. 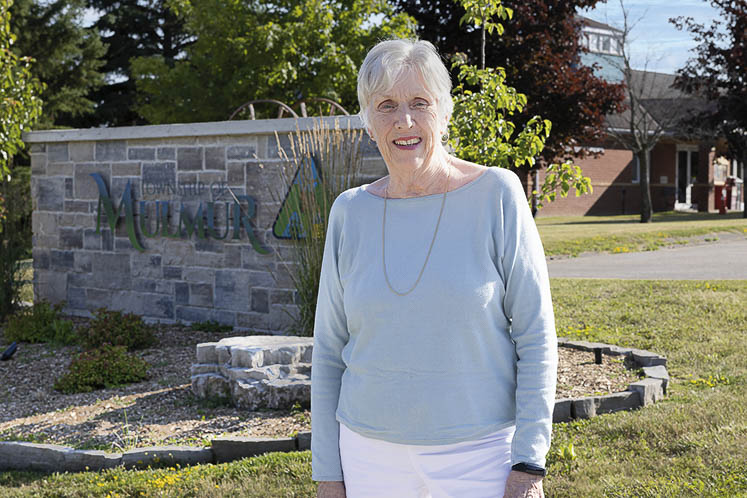 She serves as editor of MC2’s bimonthly bulletins, which keep residents informed on what’s happening locally, plus produces The Look Out, the organization’s semi-annual newsletter which provides a more detailed analysis of local issues.Focused primarily on land use and the wise management of taxpayer dollars, Cheryl views her role in monitoring council as a way of keeping the community informed about the work of elected officials.

“My father inspired my interest in local politics. He believed that the local level was the most important, and made it clear that he expected me to pay attention,” she says.

Longtime Mulmur residents, Cheryl and her husband, Hugh, had raised their two children in the township’s scenic hills. Retired from nursing and then supply teaching, and keen to give back to her community, Cheryl first started attending council meetings in 2011, when she joined the fight against an application for a gravel pit on busy Airport Road.

Then, a few years ago, Mulmur had a major problem with speeding and noise. Cheryl was instrumental in setting up community safety areas and reducing speed limits.Among the current issues she’s tracking:

“Density is a concern and the proper mix of industrial/commercial/ residential is crucial. We want to do it right for our communities.” Cheryl notes that in response to the looming housing shortage, Mulmur sanctioned second dwellings on developed properties five years ago, a move the Ontario government is just now undertaking.

“People can make a difference. You just have to get involved,” she says.