Being as Jessie found herself so close to the gates of hell at the moment, she felt reluctant to lie.

Clouds hid the moon and a wet wind tugged Jessie McCormick’s braids. Mist beaded her woollen coat. The fine hairs on the back of her neck quivered with a delicious mix of fear and daring, as Jessie pushed open the gate and stole into the graveyard. Her high-buttoned boots sank into the mud.

From the elm tree, the old barn owl whooed.

Jessie darted to the church’s shadowed front door and pressed her back against it. From there she surveyed the burying ground.

Bethel Cemetery had never been a neat little graveyard, but since the workmen had begun excavating the graves and transporting the unearthed coffins to the new cemetery by the marsh, the yard had become a chaotic tangle. Empty graves pockmarked the churchyard. According to Papa, the abandoned hodgepodge of tombstones was as intolerable as a papist in the Orange Lodge.

“The whole place is a blasted disgrace,” Papa had exclaimed. “The way those workers kicked over the grave markers, no respect for the dead. Why your Granny’d climb clear out of her grave if she knew what they’d done to her.” Papa’s ruddy face turned the curious shade of purple that meant he was madder than a cat on a griddle. “And the holes!” He looked directly at ten-year-old Jessie, the oldest of his five children. “If I catch you anywhere near those holes, you’ll have me to answer to, young lady.”

Jessie nodded meekly, a sure sign visiting the graveyard was exactly what she intended, and made her plans.

Jessie sidestepped along the church wall. The stones felt uneven against her back and dampness seeped through her clothes. The trees surrounding the graveyard rattled like dry bones in the wind. Musty leaves formed a slippery carpet underfoot. Silent as a ghost the barn owl swooped down from the elm, its shadow blotting out what little light the clouds reflected. The owl rose again, a field mouse wriggled in his talons. Jessie shivered. Then she heard something.

A rustle, a whisper, a hummed melody. She strained her ears. The sound came from near the fence.

She crouched low and crept away from the church. Skirting the mound of dirt beside the closest empty grave, she inched her way to the next. A dozen yards ahead, an eerie light ascended from the depths of the earth. She leaned forward, her eyes narrowed in concentration. The light disappeared.

Jessie sat back on her haunches and waited. The light would come back. It always had before.

Jessie first saw the light from her bedroom window. With the leaves gone from the trees she enjoyed the clear view of the churchyard and sometimes, when Mama and Papa were asleep, Jessie would pull her chair up to the window to watch. She wasn’t sure what she might spot skulking in Bethel’s graveyard, but she felt sure she’d see something, eventually.

And last Sunday night she did.

Since then the ghost light had appeared every night. It rose from the earth to hover and sway in the darkness, then disappear back into the grave. If a door banged somewhere in the night, or a dog barked, the light vanished instantly.

Jessie put a lot of thought into the comings and goings of the light, and she’d come to one conclusion. At some point while the workmen dug up and moved the coffins, a ghost must have lost track of its body. That was why it rose in the quiet of the night, searching.

During supper that very night Papa had said, “Judge McCarthy’s coming to inspect the graveyard tomorrow. Once he confirms all the graves are empty, those holes can finally be filled in. And not a moment too soon. They’re dangerous, I say.”

Jessie knew if she was going to help Bethel’s ghost find its new resting place, it had to be tonight.

So here she was, hunched behind the McMaster family’s monument, her breath fogging the air. Jessie waved the cloud away with her fingers and wondered if she touched the ghost, would it evaporate too? Would it feel cold like her breath in the frosty air?

Jessie set out again. She’d seen the ghost’s light rise and sink back into a grave and she headed that way, weaving between the piles of overturned earth and crooked tombstones. Beside each grave she paused and peered in, eager for what she might find.

Never the ghost, though, just darkness and the soft patter of rain.

The churchyard’s charcoal and white cat trod the top of the fence, tracking Jessie’s progress and Jessie kept watch on him out the corner of her eye.

It all seemed to happen at once.

The light appeared in the pit directly beside Jessie. The cat hissed, and the light snapped off.

Jessie spun around. Without hobnails in the soles of her buttoned boots, her feet skidded on the slimy ground. She reached for help but her hands gripped empty air.

The wind drowned out Jessie’s cry as she tumbled into the ghost’s grave.

Jessie hit something hard before landing in mud. It oozed over her frigid fingers, soaked through her woolly stockings, sucked her into the very earth. She gasped for breath and struggled to sit.

“Don’t be silly, Jessie McCormick,” she said aloud. “If you were dead this’d be heaven and you’d see Jesus.”

Jessie, however, was seeing nothing. She stretched out her arms, searching for a way out of the pit. That’s when she touched it. Something damp and rough. It felt like wet wool and it moved as though it were alive.

She scrambled backwards, coming up hard against the grave’s wall, her breath escaping in loud little bursts. 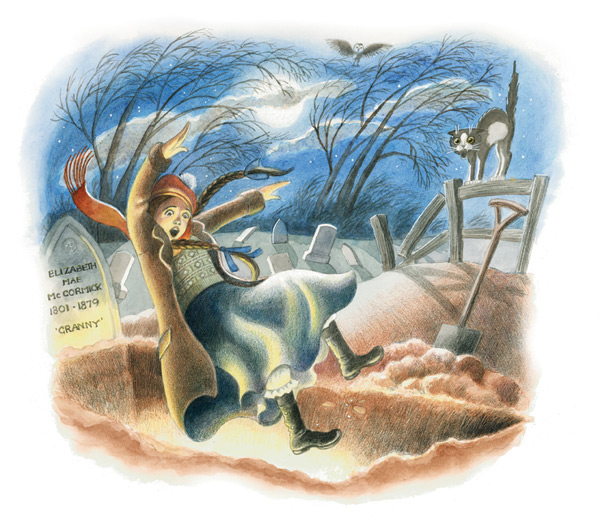 Lordy! She’d fallen into the gates of hell and the devil was going to swallow her whole! Illustration by Kasia Charko.

But it wasn’t vaporous like a mist. It was solid and twitching and suddenly she was afraid. Imagining herself a rescuer of lost souls was one thing, but being trapped in a grave with a ghost was another thing altogether.

She envisioned the ghost clothed in rags, like the picture of Lazarus in the McCormick’s family Bible. It scuffled and muttered a foul curse.

Lordy! She’d fallen into the gates of hell and the devil was going to swallow her whole! Jessie clamped her hands over her ears, but it wasn’t enough to banish the ghost’s gritty voice.

“You! Show yourself,” it said.

A blinding light flooded the small grave and Jessie shielded her eyes. She heard a rasping laugh.

“Wait a minute, ain’t you that little girly that hangs around the graveyard after school, watchin’ us dig up these here graves?”

Jessie spread her fingers to peek at the ghost. It – he – wasn’t what she’d expected. Scruffy faced, in a mud-spattered overcoat and stained red neckerchief, one of the gravediggers towered over her.

Jessie dropped her hands from her eyes. “I know who you are,” she said. “You’re the fellow they call Joe. What are you doing here in the middle of the night?”

Joe consulted his gold pocket watch. It sparkled in the lantern light, and Jessie marvelled how a grave digger could own a watch so elegant.

“It ain’t past my bedtime,” Joe said, snapping the watch shut. “Hows about yours?”

Jessie frowned. This morning Reverend McKay preached a thundering sermon on the sin of dishonesty and its fearsome consequences. Being as Jessie found herself so close to the gates of hell at the moment, she felt reluctant to lie.

“I came to help the ghost.”

Joe’s gaze darted around the empty grave. “What ghost?”

“The one that’s been searching for his body. I think he lost it when you moved his coffin. I came to help him get back where he belongs.”

Joe shoved the watch into his pocket. “You seen this ghost?”

“Well, not exactly but I’ve seen his light. Maybe you’ve seen it too and that’s why you’re here? To help the ghost?”

Joe hunkered down until his face was level with hers. The whites of his eyes were dirty yellow and his breath stank something fierce but Jessie held his gaze.

“That’s right, girly. I come to help the ghost. So you best run home to bed and leave this ghost stuff to me.”

Joe lifted his lantern high, as though expecting her to flee, and for the first time Jessie saw the cloth sack beside his feet and the ladder resting against the grave’s side.

“You sure you know where to take the ghost so he won’t be lost any more?”

Joe’s black eyebrows shot up. “Girly, ain’t I the one who moved him in the first place?”

“I guess you were,” Jessie conceded.

“Then up we go.” Joe grabbed his sack and mounted the ladder. “I’ll go first on accounta the ghost might be waitin’ up top and this way I can protect you, girly.”

Jessie flicked her braids over her shoulders. She watched him step onto the ground above, set his sack aside and reached back for her. Grasping her wrists, he hoisted her up the last few rungs. When he released her she stumbled a little, half by accident, half by intent, tripping over his sack. Its contents spilled out into a puddle.

Joe cursed and dropped to his knees. “Look what you gone and done, girly. I got a right to tan your hide for this.”

“Don’t be sore. I’ll help gather your things back up.”

She squatted beside him and carefully picked his possessions out of the muck. An engraved pocket knife, a pearl necklace, a gold ring, a familiar jewelled hair comb. She remembered Granny wore one just like it. She shifted her knees, pushing the comb out of sight while she dropped the other things into Joe’s sack.

“That everything?” she asked.

“Looks like. Now off with you, girly, before your Papa comes ahuntin’.” Joe looked towards Broadway. “Maybe that’s him comin’ now.”

A cluster of men hurried towards the graveyard. She heard hear Papa calling her name.

Joe nudged his sack out of sight. “Better get goin’, girly.”

Jessie nodded. Closing her fingers around the jeweled comb, she pushed herself to her feet. She stuffed her fists into her pocket and took one last look at the hole she’d fallen into. Joe’s lantern shone on the grave marker.

“Jessie.” Papa’s voice sounded thready, the way it did when he was heart-sick.

She ran to him and Papa scooped her into his arms, hugging her close. His breath felt warm and reassuring against her cheek.

“Jessie McCormick, didn’t I tell you not to come down here?”

“I know, Papa, but I needed to. Granny had something for me.”

“Granny?” Papa said, carrying her out of the abandoned cemetery. “Granny’s in heaven, Jessie. She can’t give us anything more than our memories.”

Jessie patted Granny’s comb in her pocket and snuggled closer to Papa.

About the Author More by Jayne Self

Jayne Self lives in Orangeville and is a member of The Word Guild, a Canadian association of Christian writers.
Add a Comment