In the mid-1940s, Hal Henry paid $75 for his first car. It was a Ford Model A Roadster he had found abandoned in a haymow. It made him the first student at the high school in Lucknow, Ontario to have his own set of wheels.

Unlike most young men, though, Hal’s first concern wasn’t mechanical. He didn’t dive under the hood to get the neglected old car running – his father would take care of that. No, his first concern was æsthetic. He gave it a paint job.

Some sixty years later, the exhibition of Hal’s artwork this summer at Dufferin County Museum and Archives proves just how completely the die was cast those many years ago. The retrospective, titled Hal Henry: Dufferin’s Renaissance Man, reveals a life characterized by a creative heart and gifted mind. As DCMA manager Darrell Keenie describes him: “Hal is a kind of Daniel-Boone-meets-Rhodes-scholar-meets-poet-meets-Delta-bluesman.”

Hal’s first career was in education, and although it lasted more than three decades, he fell into it by accident.

Following World War II, there was a shortage of teachers. Hal’s mother had been a teacher before she married and the school board wanted her to come back to take a one-room school in the country. There was a problem, however: the family lived in Wingham and his mother couldn’t drive.

Eighteen-year-old Hal had just graduated from a mediocre high school career. One of the school board trustees came up with a plan: there was another one-room school without a teacher, a few miles distant from the one they wanted Hal’s mother to take. Hal could drive his mother to school, and then continue on to teach at the other school. Hal’s mother talked him into taking the job.

He spent the next four years teaching in one-room schools, taking a couple of summer courses along the way. Today, he credits that early experience with shaping his lifelong philosophy about education. It was a philosophy he was able to put into practice when fate intervened again, shortly after he had moved on to an urban school in Georgetown.

“The second week of school the principal died,” Hal recalls. “The board invited me to attend a meeting that night, and they asked me to take a grade eight class, and become principal.” So at the ripe old age of twenty-three, Hal moved into administration.

Over the next decade in Georgetown, he also advanced his own education, eventually earning a Master of Education from the University of Toronto. That accomplishment didn’t come with-out effort, though. He says, “I was almost a workaholic by the time I was thirty.” 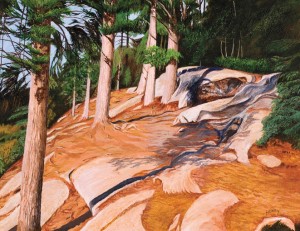 Moving on to North York, Hal was asked to design and open Shoreham Public School – and with that he set about creating what, at the time, was a bold new concept for education.

Borrowing from his one-room school-house days, the facility featured an open-concept design and “multi-age” school organization. It was located adjacent to a seniors’ centre as well as York University, and Hal incorporated both the seniors and students from York’s teaching pro-gram into the Shoreham classroom and after-school programs.

Another novel feature was that students meted out penalties themselves for misbehaviour among their peers, by way of a teacher-monitored committee. Perhaps most revolutionary, the school had no grades. Says Hal, “You soon learn that the graded structure, which still persists in most schools, has nothing to do with the learning process.”

The school opened in September, 1969, and Hal remained principal until his retirement in 1981, a tenure interrupted by one year-long sabbatical to study and report on schools in England. During those years, he also served as a consultant on the design of two other schools – one in Peel and the other in Bucks County, Pennsylvania. 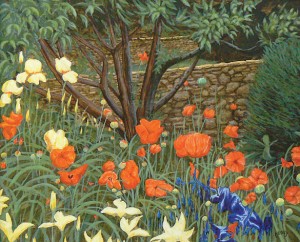 Ironically, with an indexed pension, Hal says that after nearly thirty years of retirement, “I’ve now made more money on my pension then I ever did teaching.”

In the mid 1950s, Hal’s work in education also introduced him to painting. “I had a teacher on my staff at Harrison School in Georgetown. She noticed I did sketching on the chalk-board a lot. She said, ‘Why don’t you come to an art class?’ She eventually talked me into it after about a year.

“So I went to this art class and the teacher said, ‘What do you like to paint?’ I said, ‘I don’t know.’ So he told me to look around at his paintings to see if I got any ideas. I did that and told him, ‘I have a photograph of a red canoe on the shore beside an old stump up in Algonquin.’”

The teacher sent Hal home to get his photograph. He returned and set to work, staying an hour after everyone else had left. After reviewing Hal’s work, the teacher said, “I can’t teach you anything about painting. All I can do is tell you how to mix colour.”

At the teacher’s urging, Hal submitted that first painting to the Five Counties Art Show. It didn’t win the show, but it did win in Halton County. “My first wife still has that painting,” says Hal. “She says she’s going to keep it until the day she dies.”

Hal has continued painting ever since. And just as one-room school houses shaped his view of education, so too does his rural background influence his choice of subject matter. His art most often reflects the buildings, scenery, animals, people and artifacts of life in the country.

After a half-century, Hal keeps painting for the pleasure of the experience. “It’s the creative process. I just get satisfaction out of doing it for my-self.” Because of that, he says, selling his work is not important to him.

Be that as it may, hundreds of paintings have sold. In particular, he has completed many commissioned portraits, including, he says with a note of pride, “a lot of dogs.”

Since that first painting, Hal has expanded into other media, and now works comfortably in acrylics, oil, pencil or watercolour. He describes his work as depicting “realism with careful attention to colour and detail.” He has exhibited across southern Ontario and has studied and painted in the United Kingdom and Europe.

Perhaps painting also feeds Hal’s soul. A practitioner of transcendental meditation since the 1970s, who met Maharishi Mahesh Yogi, he says “With painting, you’re working by yourself.”

Following Hal’s retirement from education, he combined the skills he learned building schools with the attention to detail he shows in his painting, and created a second career.

“I wanted to be an architect originally, but my parents couldn’t afford to send me to architectural school,” he says.

So, at age 55, Hal came back to architecture.

In the years since, he has designed, built, renovated or added to some forty homes in and around Dufferin County. His designs have earned a name, too. Even some second- and third-hand owners in the region will tell you that they live in a “Hal Henry house.”

Hal’s own home, which he shares with partner Marion Middlebrook, is an example of his handiwork. Located in Orangeville’s Montgomery Village subdivision, the house appears fairly standard issue on the exterior. Inside, however, it quickly becomes apparent that Hal worked with the developer to remove walls and rearrange rooms, resulting in a comfortable, open space uncharacteristic of a subdivision house. Window positions have been adjusted to perfectly accommodate antique furniture and the view outdoors. Hal works from a generous studio he installed in the basement.

Along one wall in the studio sits a large collection of harmonicas. Playing them has been another of his lifetime pursuits. “I learned to play from my Uncle George. I still have one of his harmonicas.”

About a decade ago, Hal’s harmonica playing underwent a major evolution. For a couple of years, he and Larry Kurtz, a blues musician and founder of the Orangeville Blues & Jazz Festival, made regular trips to Toronto together to study blues harmonica. “I’d been playing straight harmonica for years,” says Hal. Playing cross harp, traditional to blues, “is like playing the opposite of straight harp.”

The lessons opened the door to a whole new world of music, and with typical Hal Henry drive and focus, he is now an accomplished blues musician.

Given Hal’s life as a visual artist, his passion for music may seem like an unusual departure. But, he says, “There’s no other kind of communication I enjoy as much as playing with other musicians.”

Surprisingly then, asked which of all his accomplishments has made him feel most alive, Hal chooses a decidedly less glamourous pursuit: “Probably the volunteer work I do at the hospital. I’ve been doing it for about fifteen years, two afternoons a week. It’s called ‘escort.’ Pushing people around on wheelchairs and stretchers, mostly.”

Now 83, Hal credits remaining physically and mentally active with keep-ing him going as the years progress. 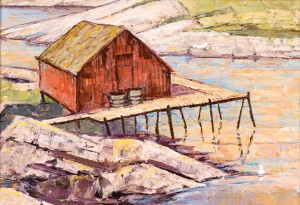 And he feels his most important role in life has had nothing to do with his creative or professional interests. It’s “fathering four children” in two previous marriages.

“Two of my children are in their early fifties, and two are in their late twenties and early thirties. My daughter Dianne is the oldest, and I have three sons: Eric, Byron and Sean.” He describes his relationship with all of them as “very close.”

That closeness is perhaps best reflected in the fact that, in one way or another, his children have all followed in his footsteps. Dianne is a teacher, while the three boys all attended art school and two of them are musicians. Hal also has two grandchildren, with a third on the way.

Hal and Marion have lived together for about fourteen years. “We met at a line dancing class,” he recalls, “and we liked to jive together. We still dance whenever we get a chance.”

He remains an active learner, as well. Currently, he’s taking a course on computers and the Internet. A shiny new computer has taken up residence in a little room off his studio.

Always an avid outdoorsman, Hal also continues to hike and snowshoe. He and friend and fellow artist Helmut Koell can frequently be found hiking the Bruce Trail.

The wilderness is where he’d like to end up, too. “I’ve gone canoeing up in Algonquin with all my sons,” Hal says, and adds that when he dies, “I’d like them to go out in the canoe and sprinkle my ashes on the water somewhere.”

Maybe the canoe can be red, and his friend Larry Kurtz can play some twelve-bar blues.