Letters published in the Summer 2012 edition of In The Hills magazine. 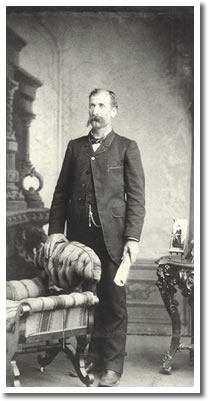 “The Colourful Constable and his Remarkable Hotel” (spring/12) is colourfully told by Ken Weber and caused me to reflect that life is fleeting and those who respect the past have a greater vision for the future. Historic preservation is an act of remembrance and patriotism.

Your readers may be interested to learn that an original photo of the “Colourful Constable” survives. It is in the possession of Dave and Sheila Apple who live in Win Hand’s 1876 “saltbox” house in Orangeville. The image, known as a “cabinet card,” was taken by photographer W. Still of Orangeville about 1877.

Dave indicated he was not certain it was Win. However, scale measurements based on the fact that table legs in the 1870s were typically 28 inches indicate the man’s height was exactly 6′ 5½”. So “hands down,” the photo is of Win Hand. (If only the idiom were “hands up,” it would more aptly relate to an officer of the law!)

County Council recently voted 18 to 11 in favour of efforts to preserve the 1863 Stanton Hotel. Since Ken Weber referenced the Town of Mono, it’s appropriate to commend County Councillor Laura Ryan (Mayor of Mono) for voting in favour, and Mono councillors Elaine Capes and Bob Mitchell, as well as four members of Mono’s Heritage Committee for being among the many in the gallery to lend support. Mono is taking great strides in heritage preservation in Dufferin, where, in Ken’s words, “there has been a curiously limited approach to heritage building preservation.”

We were really impressed with the article on the Stanton Hotel. The hamlet of Stanton has never had such attention and we thank you for informing your faithful readers of some important local history.

With all the wonderful concern over the Stanton Hotel we might forget about another historic building right across the road that is also a proud part of the history of Mulmur – The Olde Stanton Store.

It was established in the 1860s and finally boarded up for years. My husband Len and I restored and reopened it in 1980. This old general store (turned home décor and “something for everyone” store) also has an amazing story to tell.

Stanton was the second settlement in Mulmur. Its first settlers were the Walkers and the Hands. They wanted to call their settlement “Handville” or “Walkerville.” The judge who was to make the final decision could see a feud in the mix and, to calm the storm, pronounced it “Stanton” – and so it remains today.

The history of Stanton is very colourful – with hotels, a courthouse in the backyard of the Stanton Store, an Orange Lodge and a blacksmith shop. Eventually, Mr. Love also built a fine residence beside the store, which also remains today. Much more detail about this hamlet is stored in our wonderful Dufferin County Museum and in the hearts of so many customers who have dropped into our store over the past 31 years to relive a little history and tell us their stories.

Len and I purchased an old but very important building and have had many happy years running our business and raising our family here. Our dear neighbour Edna Greer (mother of Kevin Greer) came to the store on opening day in 1980 to say how thrilled she was that we had put Stanton back on the map!

Edna was a teacher at the schoolhouse that the Knisleys have lovingly restored down the road. So Stanton may be changing, but The Olde Stanton Store remains a rich and proud part of our heritage. Please drop in for a free taste of our homemade fudge!

I was delighted to see Ken Weber had set a puzzle that I actually could solve (“A Puzzling Conclusion” spring/12). Had the letter been signed “Elizabeth R,” it would have been more problematic.

However, in “Border Challenge in Erin,” Newfoundland and Labrador was excluded from the possible answers as it wasn’t a province in 1924. Therefore, the state of Alaska should also have been excluded because it wasn’t a state in 1924. It achieved that honour in 1959, followed by Hawaii in 1960. I’m not sure about the dates of statehood for the other 48 states, but I’m old enough to remember both these events.

In the “Border Challenge in Erin,” question C asks how many U.S. states have land mass touching the border with Canada. Your answer says New York does not touch. If you look on a map, the northern part of New York state, east of Cornwall, Ontario, reaches until Interstate 87 for about 35 kilometres of land touching land.

The readers are correct. These are embarrassing errors. I get a tiny swatch of my own back though, even if it doesn’t really apply.  Alaska and Hawaii both became states in 1959: Alaska in January and Hawaii in August. The Hawaii date sometimes gets wonky because Eisenhower mandated a new flag (with 50 stars) on the day of Hawaii’s entry in 1959, but it didn’t become the official U.S. flag until 1960. Other than that, the only solace I can take is that readers care enough to send in corrections! 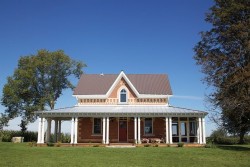 Caledon Building & Design, brought skilled trades, organization and a good sense of humour to the work. Photo by Pam Purves

Permit me, as the architect of Erica Hyland’s home (“At Home in the Hills” spring/12), to add a much-needed reference to the builder of the project, Patrick Skuce. Mr. Skuce’s construction firm, Caledon Building & Design, brought skilled trades, organization and a good sense of humour to the work. This last trait is essential when working on older buildings, which reveal all sorts of secrets and surprises in the course of being repaired. Ms. Hyland, her father Geoff and Patrick worked with me as a team to rejuvenate the former farm building, and to bring it into the 21st century as a beautiful and energy-efficient residence. 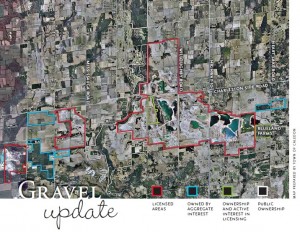 After a period of two years, this spring the Ministry of Natural Resources advised Blueland Farms that the proposal to mine aggregate below the water table at the McCormick Farm on Heart Lake Road has lapsed. Blueland failed to enter into regulatory processes with the Town of Caledon or any of another seven agencies to deal with their objections to the licence application, had not addressed the many letters of objection from citizens as required, nor sought the necessary bylaw changes and amendments to Caledon’s Official Plan.

At REDC’s request, the signage advising of the 2010 licence application has been removed. However, a company representative has informed MNR that Blueland intends to resubmit within a few months. If the company does so, there will be notification of its new proposal in local papers and a new sign will be posted on the property with new application information.

Community members will once again have to register their letters of objection with MNR. The company must respond to objections in order to fulfill the application process.

The REDC Ecological study, EMAP, is underway – donations are welcome! We’ll have information to share at a fall community event. With this study, REDC is attempting to raise the standard of review for any expansion of the current 3,800-acre aggregate development. In the meantime, on the right(click for larger image) is a 2011 town map of the overall industrial development from Caledon Village to Belfountain. As you can see, more is on the way.

We have been residents of Melancthon Township for 22 years and moved here to enjoy a peaceful, rural property and raise our family. Over the past few years we have observed many changes to the township in the form of industrialization. First, there was a wind turbine development in southern Melancthon. Second, precious farmland was bought up for the second largest limestone quarry in North America. Third, there are plans for a 50-turbine wind farm in northern Melancthon. This industrialization is so depersonalized that massive turbines are referred to as “inflictors” (of what?) and the residences in close proximity are referred to as “receptors” (of what?).

At first glance, these industrial projects may appear very different. However, we have noticed many similarities. Both projects:

We feel both projects will have short-term gain for a few at the expense of long-term pain for many. While we understand “change is the only constant,” we wonder if these changes are worth the tragic cost for future generations.