The On-Again-Off-Again Birth of Peel County

When the council of the newly independent County of Peel convened in 1867, a first task was to choose a site and a builder for the courthouse and jail.

On October 7, 1856, at the first meeting of a special council created to establish Peel County, harmony prevailed and every vote passed unanimously. But then the wheels fell off and it took ten long years to finish the job.

The issue that nearly torpedoed the process was where to put the county seat. Whichever community won this prize would not only boast the courthouse and jail, legal requirements for a county’s existence, but would also enjoy significant commercial and social perks. Brampton, of course, was a contender, but Streetsville, Malton and Port Credit all felt they too had a legitimate shot. And Bolton, Sandhill, Alton and Tullamore, along with over 20 others were rolled into the debate before the issue was settled. Disagreement over the choice of county seat became so intense through the ten-year period that establishing Peel County almost became a stillborn venture.

Each of the three counties graced by these hills had to choose a county seat when they were established. For Wellington County, established in 1853, Guelph was a slam dunk because it already had a courthouse and jail, and was the area’s clear commercial leader. Dufferin County, once spread among Grey, Simcoe and Wellington counties, was established in 1881, just two years after the first public vote was taken to begin the process (although earnest lobbying had gone on for nearly two decades).

While debate about municipal governance continues to this day in Dufferin, in 1881 simple logic put Orangeville way out in front as the county seat. For the voters and councillors of Peel in the mid-19th century, however, nothing about becoming an independent county seemed obvious or straightforward.

It should have been easy because Peel was technically already a county when that October meeting was held in 1856. When the province’s district system of governance was replaced by the county system in 1849 (see sidebar), Peel had been set up under a single governance unit called The United Counties of York, Ontario and Peel.

Ontario (now part of Durham Region) quickly separated to become an independent county, leaving The United Counties of York and Peel. Not long after, Peel too seemed ready to go it alone. Its townships and urban centres were filling with people. Its farms had moved beyond self-sufficiency into prosperity. Commerce was growing. Clearly it was time for local administration. In Peel, however, “local” became a very narrow concept.

The men who met on October 7, 1856 were designated the Provisional Municipal Council of the County of Peel by an act of Parliament. They were the reeves and deputy reeves of Peel’s five townships: Albion, Caledon, Chinguacousy, Toronto and Toronto Gore, plus the reeve of Brampton, Peel’s only incorporated village. Their job was to make Peel County independent of York, and the first step was to hold a public vote (male landholders only) on whether to go forward with the project.

The results were a jolt. Although 1,309 voted in favour, nearly as many, 1,258, voted against. More ominous was the vote distribution. Albion, Toronto, and Toronto Gore lined up solidly on the nay side (Albion, for example, voted 492 to 3 against), while Caledon, Chinguacousy and Brampton were overwhelmingly in favour. Although the vote was a victory for the yeas, the tiny majority of 51 indicated trouble ahead because the next decisions were where to put the county seat and how to pay for the courthouse and jail to be built there.

Over the next decade, each member of the provisional council locked on to his own preference for county seat (precisely half the members seemed to be anti-Brampton) and could barely agree on anything. Typical was a meeting in January 1859 at which it took 24 consecutive votes to agree on the time and place of the next meeting. No wonder then that by 1860, the council had tried and failed on 160 resolutions to settle the choice of county seat.

The voting public too played its part. In April 1862, with negotiations still going nowhere, and having already participated in three referendums that decided nothing, electors went to the polls once again. This time they killed the idea of Peel as a separate county, choosing by a another slim vote of 2,055 to 1,925 to stay united with York County.

But even that didn’t resolve things. Two and a half years later, the council for the United Counties of York and Peel (back in charge after that 1862 vote) passed a motion to let the electors of Peel try yet again – which they did in March 1865 and, for reasons that still perplex local historians, a large majority (567) now said, yes, let’s make Peel a separate county.

Happily for the future of Peel, that same election killed two birds with one stone by holding not just a yea/nay on becoming a county, but also by allowing a write-in vote for county seat. Although choices ranged from Lockton to Coleraine to Burrell’s Hollow (there were even 15 write-ins for Toronto), a vast majority wrote in Brampton and that settled the matter. After ten years the struggle was over.

Well, almost over. When the council of the newly independent County of Peel convened in 1867, a first task was to choose a site and a builder for the courthouse and jail. That potentially hot topic did indeed stir the pot again – but only briefly. The people of Peel and their councillors were too weary to face another storm. 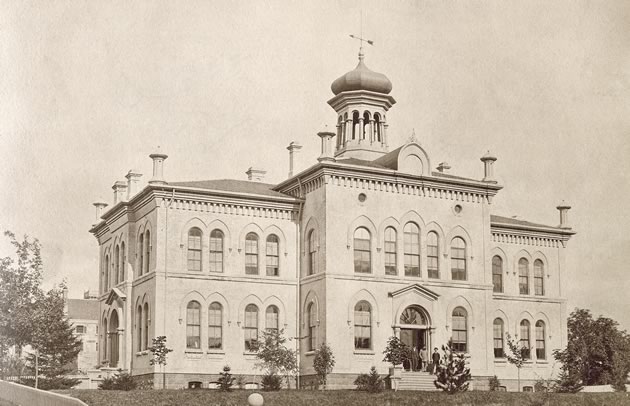 Peel County Courthouse, c1875. This Venetian Gothic building with its Byzantine dome in the centre of Brampton was designed by Toronto architect William Kauffmann and completed in 1867. It served as Peel council chambers until the 1950s, and trials were held in the raked and balconied courtroom until 1967. Now part of the Peel Art Gallery, Museum & Archives (PAMA) complex, the courtroom and other spaces are available to rent for performances and meetings.

On January 1, 1974, Peel County became the Regional Municipality of Peel with its three administrative structures: the Town of Caledon and the Cities of Brampton and Mississauga. The purpose of the change was to consolidate services in the name of efficiency.

In Peel, reaction to the change was not unlike that of a hundred years before. Many county politicians asserted they would have to be dragged kicking and screaming out of a system that had worked well for a century. And just as back then, the conversion to a new municipal structure began ten years before it finally became official. This time though, negotiation replaced acrimony, and when Peel County Council accepted the final regional plan by a close vote of just 12 to 10, no one walked away. Perhaps history had taught a lesson.

How Counties Came To Be

Following the division of the Province of Quebec into Upper Canada (Ontario) and Lower Canada (Quebec) in 1791, Lieutenant Governor John Graves Simcoe organized the administration of Upper Canada into “districts.” Within districts, he established counties. (The Home District, for example, once held the counties of Peel, York, Simcoe, Ontario and parts of Dufferin.) Administrative power rested with the districts and officials were appointed. Townships were carved out of the counties, essentially for survey purposes, but these units too had no administrative power in the district system.

By the mid-19th century, the population of Upper Canada (by then Canada West) had grown to nearly a million. The districts, undemocratic and far too unwieldy, were abolished in 1849 and replaced by a democratically elected county structure. Within a county, each township and incorporated village and town elected its own council (usually five people), and each council in turn designated representatives to serve on the county council. With tweaks, this system has prevailed ever since.