Providence for the Playwright

“Luck affects everything; let your hook always be cast. In the stream where you least expect it, there will be fish.” Ovid 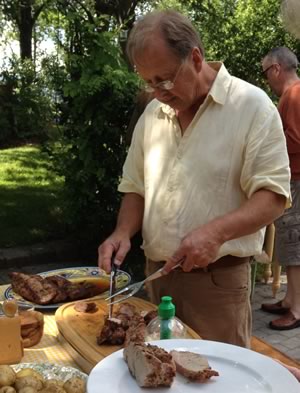 A Literary Luncheon at the Needles’ farm

Last month I decided to take a break from my usual blog post.  During the month of March, I was a participant in a scriptwriting course called Page to Stage, taught by Dan Needles.  Dan has been my Literary Hero for many years.  I have seen all of his Wingfield Farm plays.  I was the audience member who was laughing uncontrollably and rolling in the aisles of the theatre.  I always imagined that it must be a wonderful feeling for a playwright to have instant validation through the spontaneous feedback of laughter.

First, let me take you back to last winter – March 2013. I signed up to take Dan’s course and I enjoyed learning all about the craft of writing for the stage.  I listened as the other attendees read their work aloud and I offered thoughtful suggestions.  I appreciated being part of a creative and diverse group of writers.  As the weeks went by, I came up with a few ideas but could never manage to put them onto paper.   Dan assured me that I “didn’t need to write”—that I was welcome to “play in the sandbox” with the others and listen and learn.  So that is what I did.  I enjoyed the session but I must admit, at the end of the course, when everyone had a “sand castle” to show off and share,  and I had nothing, I was just a little miffed at myself.

This March 2014, Page to Stage was offered once again and so once again I decided to partake.  Three weeks went by and I was still struggling to get my ideas into script form. I was beginning to feel a sense of panic.  All my friends were asking me how my writing was coming along and I had to admit that I had NOTHING.  Each Thursday night, my fellow group members would read their work aloud, while the rest of the group oooohed and ahhhhed .  I hung my head lower each week.  The blank pages taunted me.  I considered quitting.

With one week remaining in the course, I had to do something.  I was descending into a procrastinational snit.  Then one evening, I read an article about the Law of Attraction.  I learned about the theory of increasing vibrational energy.  Apparently if we put our desires out into the universe, the things that we wish for will eventually come to us.   Of course you have to get yourself into a positive mindset and you have to believe that you can really meet your goals.

The first thing I decided to do was to set up a Literary Shrine dedicated to Dan Needles.   I took my trusty autographed copy of the Wingfield’s World: The Complete Letters from Wingfield Farm and I propped it on my desk.  The theory was that the positive energy would flow out of the book and into me.  I waited and waited without success.

My shrine obviously needed something more powerful.  I managed to locate a photograph of Dan in an older issue of In the Hills magazine.  Dan was clad in Farmer Plaid, posing in front of a herd of cows.  I cut it out and framed it.  It was perfect.  I propped the cherished photo atop the Wingfield Farm book. Again I waited for literary inspiration to strike.  Again, nothing.

In order for the magic to work, I needed something much more personal to add to my mythical sanctuary.  Suddenly, I recalled that I had the perfect item, hidden in my bottom drawer.  But first, let me take you back to last summer… 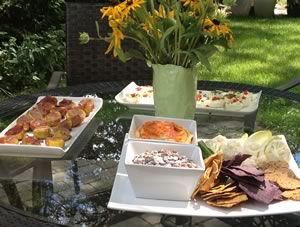 Dan and his incredible wife Heath prepared an amazing outdoor meal and the weather was divine.

The March 2013 Page to Stage group was invited to a Literary Luncheon at the Needles’ farm last July.  It was all very exciting and I spent the day running around like a puppy at the dog park.  We were able to rub shoulders with Norm Foster and Patricia Vanstone, who were both in town to perform On a First Name Basis.  We had the golden opportunity to wine and dine with David Nairn and Leisa Way, both of Theatre Orangeville fame.  Dan and his incredible wife Heath prepared an amazing outdoor meal and the weather was divine.

I must have had some kind of premonition that day because I was overcome with an urge to have something from Dan’s farmhouse.  I was overcome with the feeling that if I could simply possess an object from his magical, eclectic home, that good luck (in the form of writing success) would eventually come to me.

I looked around the house at all of the trinkets and treasures.  I wasn’t brave enough to ask Dan if I could have something.  That would have seemed too weird. On the other hand, I couldn’t just steal something – or could I?

And so,  in a private moment, when I was all alone, I helped myself to a small item from Dan’s home.  I nervously placed the coveted object into my purse and when I arrived home that night, I placed it carefully into my drawer.

And so, eight months later, when I found myself searching for a good-luck charm to add to my Dan Needles Literary Shrine, I carefully removed the stolen Q-tip from its hiding place.  I added this pilfered offering to the book and the photo and once again I waited.   Within hours, I sat down and began to write at a frenetic pace.  Within a day I had written my very first scene.  That week, I proudly read my work to the rest of the group.  They loved it, and so did Dan!

On March 29, I was able to see my scene performed live on the stage. I was so thrilled to see my words brought to life by two wonderful actors and an amazing director.  The best part of all was hearing the audience laugh.

Oh, and if you are worried about Dan Needles finding out that I embezzled the Q-tip from his home, I’ve already confessed my crime to him. He admitted that he had been searching for it everywhere; however, since it obviously means so much to me, he granted me permission to keep it. And, so my cherished Q-tip will continue to be an everlasting symbol of Dan’s literary spirit, for many years to come.

Do you have a good luck charm? 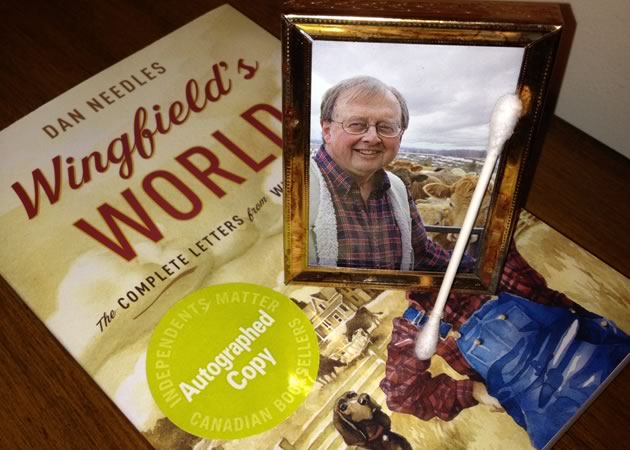 Laurie teaches Grade 4 at Island Lake Public School in Orangeville and writes in her spare time. She lives in Mono and looks for the humour in everyday country life. Check out her blog “Two Blue Boots”.
Show 24 Comments