“I like her,” he said, pulling her out from under the deck where the pups were all in various positions and states of sleep in the dry summer dirt.

She had my heart the moment I saw her little blonde body curled up among her siblings, a bright patch amid the murky darkness. She was born on Mother’s Day. Something in my heart told me she would be coming home with me.

My first visit had been solo, to meet the litter of puppies, and the mother dog. The mother was big and gentle, a little bit protective. She was tall and lean, but could curl up into a small ball. A few weeks later I took Adrian to see the puppies. I actually had to drag him out the door, much to my dismay. A hot day, with the air conditioning on and a Minecraft video had him sunk down between the couch cushions and difficult to get moving.

When he got there, though, he was quite curious. My heart squeezed again when he went straight to the little blondie. “I like her,” he said, pulling her out from under the deck where the pups were all in various positions and states of sleep in the dry summer dirt. He tried to get her to sit and shake a paw, the poor girl tumbled over, roly-poly and unsteady.

Then things got crazy for a while. I had been considering selling the house, and had been house hunting almost every night. I was “decluttering” my home. The deck was being resurfaced and we couldn’t walk out the back door. The owner of the dogs, Lesley, really needed an answer as the pups were ready to go to their homes. All had been taken but the little fair pup. Adrian’s baseball schedule had us out four nights a week. It all just seemed too much, so I sadly told Lesley we couldn’t take the puppy.

A last minute thought came to me, though, and I messaged her: Could she hold onto the puppy for the summer? I had great hopes things would be much calmer and more settled by the beginning of the school year. Lesley said yes, but it had to be guaranteed.

No turning back, I took a deep breath and messaged back: “Yes, I’ll take her! Guaranteed.”

The end of the summer turned into the August long weekend when all of the puppies had gone to their forever homes, and Lesley needed the little blonde to go somewhere for the weekend. I decided she was coming home for good. Adrian was surprised and happy and jumped off the couch when I gave him the news. We went up to Shelburne on a Thursday night to get her. Adrian tried to get her to sit and shake a paw again; this time she rolled over, grabbed the leash in her mouth and shook it side to side.

“Blixen” is a greyhound cross, with giant paws and joints, all ribs and legs. Her fur is the colour of light wheat, her nose and paw pads black ink, her eyes glossy melting chocolate. She looks like a tiny deer and is devilishly fast; thus the nod to one of Santa’s reindeer, with a play on “bliksem,” the Dutch word for lightning. 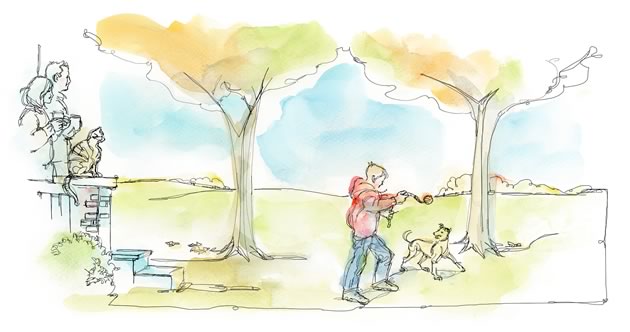 “Blixen” is a greyhound cross, with giant paws and joints, all ribs and legs. Illustration by Shelagh Armstrong.

Interruptions to our normal routines sent me spinning. Blixen wanted to snuggle in bed as she had with Lesley, but I couldn’t sleep a wink with her mild doggie woofs and dreams shaking the coils. She did her business all over the house and try as we might, we did not get her out on time, or catch all the accidents. Our real estate agent sent us a text to let us know we had missed some in the dining room – during his open house. I slapped my palm to my forehead while I threw the ball to her in the field.

Remy, our two-year-old cat, has kept his fur at full figure for the entire first month. He is clearly the boss and has staked out strategic checkpoints to prevent the dog from moving freely. Alternate routes, waiting games and full-on standoffs between the two continue. We locked the hissing ball of confusion into a bedroom many times just to let the dog have a peaceful meal, leading to a full meltdown by poor Adrian. “You’re going to give away Remy!” he cried into his dad’s lap after days of us chastising the tabby cat.

We assured him both Remy and Blixen were part of the family, and they would sort it out eventually. Adrian has slowly started trying to counsel the two into a better relationship. His voice is kind and gentle with them both, and he gets up freely from the couch to trot off with Blixen, echoes of “sit… shake a paw…” following them down the road.

Belfountain Salamander Festival takes place September 27 from 10 a.m. until 3 p.m. This event brings the community together for a day of fun while raising awareness of the endangered Jefferson salamander. Festivities are held in the village of Belfountain and the conservation area nestled beside the village that is an absolute treasure. Vendors, local food, live entertainment, silent auction are attractions that make this a great family outing. belfountain.ca

The Rock Stars of the Kids’ World are Coming!

Join in a one-of-a-kind community run on October 25 from 8 a.m. until 12:30 p.m. Celebrate the season by running in costume and raising funds to support the United Way. This is a family event – kids 12 and under can participate in the 1 km course. The 5 km course caters to the avid runner and wheelchair athlete and is a chip-timed event. See details at peelregion.ca/uw/peel5k/

Or Plan Your Own Route …

Check out walkandrollpeel.ca, an excellent resource for finding walking and cycling trails in the south end of the hills. In Caledon, the Bruce Trail main trail covers 55 km, the Bruce sidetrails 45 km, and the Caledon Trailway 35 km, and there are hundreds of kilometres more to discover.

Take a Trip to Neverland

And Finally, a Special Note for Small Business Owners

The Orangeville and Area Small Business Enterprise Centre (SBEC) hosts a number of seminars and educational series that are great if you are a small business owner – and we know many of you moms and dads are doing the juggle. On November 13, SBEC presents “Home-Based Business – Profit from Home” to discuss the advantages – and disadvantages – of working from home. Janet Horner, chair of the Rural Ontario Institute, is the guest speaker. 6:30-9:30 p.m. $20. Alder Street Recreation Centre, 275 Alder St, Orangeville. orangevillebusiness.ca

Bethany Lee is a freelance writer who lives in Orangeville.
Show 1 Comment

Before Your Eyes: A Changing Climate in Dufferin County