Letters published in the Summer 2015 edition of In The Hills magazine. 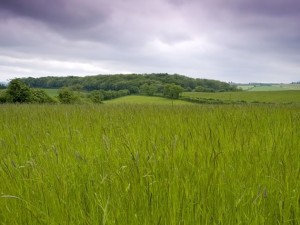 Testing the Ground for Grassland Restoration. Photo by Robert McCaw.

Re: “Bobolinks and Meadowlarks: In Search of Some Breeding Space” (spring’15). After watching a Dr. Suzuki documentary on the songbirds’ decline, there are other culprits that are rarely mentioned as to why there are fewer songbirds alive.

Now, let’s talk about crows and ravens. I have been living on our farm in Caledon East for more than 30 years, and you do not know how many times I have seen these destroyers swoop into our barns and pull back in the blue sky with young chicks in their long beaks. In the summer months I have also seen clouds of crows. Our songbirds do not stand a chance of surviving an attack from these carnivores. Their breed is flourishing, and if we do not join forces to find a better way on behalf of our songbirds, the future will have no songs, no colours – just black birds. What will they eat next ?

I am a conservationist and we face a very delicate balance in nature, but if we look, examine and act on all possibilities, we could do more good than harm. Let’s take some sensible actions right now.

These beautiful songbirds never took music lessons, yet it is music to our ears when they sing. They must keep on singing. We can help.
Anthony Noris, Caledon East

I read with considerable interest the excellent article by Don Scallen regarding the restriction on field-crop harvests to save the bobolinks and meadowlarks.

It is ironic that these birds were never native to Ontario until Europeans came to farm the forests. Now we have a conflict between the Ontario government’s Municipal Act encouragement to impose tree-cutting bylaws on farmers and its Endangered Species Act encouragement to prevent timely hay harvests.

Two facts are evident from this report. First, the ban on hay harvests till mid-July will come into force in December 2015. Second, non-native species are being protected at the expense of family farmers.

It sounds as if the UN’s Agenda 21 [on sustainable development] is alive and well in Ontario, where the policy appears to be to cram humans into high-rise cities while converting family farms into wind turbine farms.
Charles Hooker, East Garafraxa

Thank you very much for your response to my article.

What is notable about this issue is how diverse groups, through the Bobolink Round Table, are collaborating to seek solutions to the decline of bobolinks and meadowlarks. It is heartening, in this era of confrontational politics, that the round table – comprising representatives from government, agriculture, industry and environmental groups – can talk respectfully and reach consensus.

Part of that consensus is to allow farmers an exemption from the protective provisions of the Endangered Species Act. This doesn’t necessarily make naturalist groups happy, but it is recognized as the only reasonable approach. There is little chance farmers will ever be forced to wait until mid-July to harvest hay. There would, justifiably, be a huge outcry if this happened.

Instead, there will likely be a continued focus on incentives to harvest hay later along with continued acknowledgement that some types of farming (dairy farming, for example) will never be able to do this.

As for bobolinks and meadowlarks as non-natives, please consider that they were almost certainly here in smaller numbers prior to European settlement, in beaver meadows and open landscapes created by Aboriginal peoples.

But even if it could be proven they arrived only after Europeans cleared the land, that still means they have been living here 200 years or so. If that isn’t enough to qualify them as natives, then most of us are equally “non-native.” Most of us have lineages in Ontario far shorter than those of bobolinks and meadowlarks.

Compromise and respectful dialogue are necessary to address this issue. Bobolinks and meadowlarks will never trump the interests of the family farm. But I hope we can find creative solutions to allow them their place in the sun.

Re: “The Value of Farmland” by Rene van Acker (summer ’14). We have the same problem as Caledon in Centre Wellington Township, with agricultural land falling to the forces of giantism, cupidity and “progress.” In other words, the province’s Places to Grow mandate, a complete disaster for rural communities, essentially endorses the destruction of our agricultural heritage. The sad thing is that a recent poll on culture in Centre Wellington placed heritage as the number one priority of its residents, yet the bureaucratic ministries of this province, working in tandem with acquiescent municipalities, are running slipshod over the wishes of taxpayers and constituents.

Apparently, in Ontario, there is simply no limit to the rape of our agricultural heritage. It is not an overstatement to call this a tragedy.
Daniel Bratton, Centre Wellington 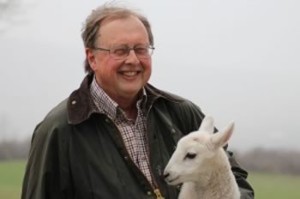 Dan Needles with a lamb. Photo by Lindan Courtemanche.

I love to read. I spent my youth staying up nights reading as much as I could. After I had my children that stopped, but I’m slowly getting back to it and I have to say that one of my favourite things to read is an article by Dan Needles. He has a way of capturing exactly what I search to find the right words to say. His column in the recent spring issue (“A Blast from the Past”), about how Canada is a land of committees and that sometimes you just have to go ahead and blow up a church in broad daylight, was right on the money. I love Dan Needles and I just wanted him to know that. As a writer and somebody who does my own share of blowing up churches in broad daylight, I aspire to his heights.
Yevgenia Casale, Caledon

Re: Interview with author Trevor Cole, “Bill’s Glorious Comeback” by Jeff Rollings (spring’15). Having grown up with Trevor’s father Bill Cole, been best man at his wedding, been tempted to join his plan to go to Chicago and get jobs as singing waiters, and having exchanged a feeble high five with him as he lay dying, I’ve been fascinated by what Trevor’s done with his father’s history. Bill would have been proud, and very envious!
Richard Capling (web comment) 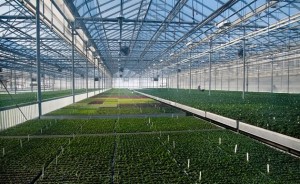 A spring carpet in one of the Sants’ five greenhouses, 2015. Photo by Rosemary Hasner / Black Dog Creative Arts.

Re: “Sowing the Seeds of Family Life / A Son’s Memoir” (spring’15). My common-law husband introduced me to Ron, the Sant family and their tire guy Bob over 25 years ago.

We watched the nursery grow from a small family business into something much larger.

Many times we would go just to visit the family. I remember holding Ron’s oldest son when he was just a few months old. My husband, Dan, Rick, Doug, Jim, Ron, Bob and their friends would moose hunt together when they could – and the stories they would tell when they got home! We were always treated as part of the family. When my husband passed, I wasn’t forgotten. They make me feel like a sister.

This family has worked very hard to build their legacy. My hope is that not only Mark, but all the children can appreciate what their fathers and grandfather built for them.
Helen (condensed web comment)

Regarding “A Digital Clock in Shelburne,” (“A Puzzling Conclusion” spring’15). The answer really should be 36, since at 11:11 three identical numbers actually appear twice.
Dave Pounds, Caledon

I find the premise tenuous, but concede it could be argued that way.